Before Kuhn, most scientists followed the place-a-stone-in-the-bright-temple-of-knowledge tradition, and would have told you that they hoped, above all, to lay many of the bricks, perhaps even the keystone, of truths temple. Now most scientists of vision hope to foment revolution. We are, therefore, awash in revolutions, most self-proclaimed. 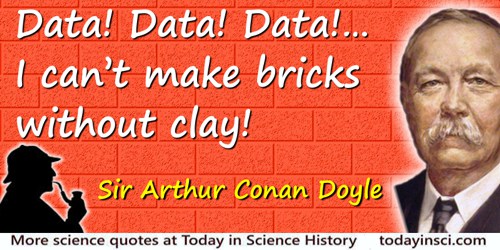 In The Adventure of the Copper Beeches, collected in Adventures of Sherlock Holmes (1892), 289.

Edward [Teller] isnt the cloistered kind of scientist. He gets his ideas in conversation and develops them by trying them out on people. We were coming back from Europe on the Ile de France and I was standing in the ships nightclub when he came up and said, 'Freddie, I think I have an idea. It was something hed just thought of about magnetohydrodynamics. I was a bachelor then and Id located several good-looking girls on the ship, but I knew what I had to do, so I disappeared and started working on the calculations. Id get something finished and start prowling on the deck again when Edward would turn up out of the night and wed walk the deck together while he talked and I was the brick wall he was bouncing these things off of. By the end of the trip we had a paper. Hed had the ideas, and Id done some solving of equations. But he insisted that we sign in alphabetical order, which put my name first.

Facts are a heap of bricks and timber. It is only a successful theory that can convert the heap into a stately mansion

Epigraph in Isaac Asimovs Book of Science and Nature Quotations (1988), 324.

Fractal geometry will make you see everything differently. There is a danger in reading further. You risk the loss of your childhood vision of clouds, forests, flowers, galaxies, leaves, feathers, rocks, mountains, torrents of water, carpet, bricks, and much else besides. Never again will your interpretation of these things be quite the same.

If any person thinks the examination of the rest of the animal kingdom an unworthy task, he must hold in like disesteem the study of man. For no one can look at the primordia of the human frameblood, flesh, bones, vessels, and the likewithout much repugnance. Moreover, in every inquiry, the examination of material elements and instruments is not to be regarded as final, but as ancillary to the conception of the total form. Thus, the true object of architecture is not bricks, mortar or timber, but the house; and so the principal object of natural philosophy is not the material elements, but their composition, and the totality of the form to which they are subservient, and independently of which they have no existence.

On Parts of Animals, Book 1, Chap 5, 645a, 26-36. In W. Ogle (trans.), Aristotle on the Parts of Animals (1882), 17. Alternate translations: primodia = elements; Moreover ... Thus = Moreover, when anyone of the parts or structures, be it which it may, is under discussion, it must not be supposed that it is its material composition to which attention is being directed or which is the object of the discussion, but rather the total form. Similarly; form ... subservient, and = totality of the substance. See alternate translation in Jonathan Barnes (ed.), The Complete Works of Aristotle (1984), Vol. 1, 1004.

Mans history has been graven on the rock of Egypt, stamped on the brick of Assyria, enshrined in the marble of the Parthenonit rises before us a majestic presence in the piled up arches of the Coliseumit lurks an unsuspected treasure amid the oblivious dust of archives and monasteriesit is embodied in all the looms of religions, of races, of families.

In Lecture to the Oxford meeting of the Archaeological Institute (18 Jun 1850), printed in 'On the Study of Achaeology', Archaeological Journal (1851), 8, 1.

Most loss of life and property has been due to the collapse of antiquated and unsafe structures, mostly of brick and other masonry. ... There is progress of California toward building new construction according to earthquake-resistant design. We would have less reason to ask for earthquake prediction if this was universal.

From interview with Henry Spall, as in an abridged version of Earthquake Information Bulletin (Jan-Feb 1980), 12, No. 1, that was on the USGS website.

Never believe that the atom is a complex mysteryit is not. The atom is what we find when we look for the underlying architecture in nature, whose bricks are as few, as simple and orderly as possible.

The genius of Man in our time has gone into jet-propulsion, atom-splitting, penicillin-curing, etc. There is left none over for works of imagination; of spiritual insight or mystical enlightenment. I asked for bread and was given a tranquilizer. It is important to recognize that in our time man has not written one word, thought one thought, put two notes or two bricks together, splashed color on to canvas or concrete into space, in a manner which will be of any conceivable imaginative interest to posterity.

The ships hung in the air the way that bricks dont.

The world has different owners at sunrise Even your own garden does not belong to you. Rabbits and blackbirds have the lawns; a tortoise-shell cat who never appears in daytime patrols the brick walls, and a golden-tailed pheasant glints his way through the iris spears.

Time is in itself [not] a difficulty, but a time-rate, assumed on very insufficient grounds, is used as a master-key, whether or not it fits, to unravel all difficulties. What if it were suggested that the brick-built Pyramid of Hawara had been laid brick by brick by a single workman? Given time, this would not be beyond the bounds of possibility. But Nature, like the Pharaohs, had greater forces at her command to do the work better and more expeditiously than is admitted by Uniformitarians.

We consider species to be like a brick in the foundation of a building. You can probably lose one or two or a dozen bricks and still have a standing house. But by the time youve lost twenty percent of species, youre going to destabilize the entire structure. Thats the way ecosystems work.

[Richard Drew] always encouraged his people to pursue ideas He said, If its a dumb idea, youll find out. Youll smack into that brick wall, then youll stagger back and see another opportunity that you wouldnt have seen otherwise.

As quoted in W. James McNerney Jr., A Century of Innovation: The 3M Story (2002), 68. (Note: The quote is in the words of Art Fry, as a recollection, and not necessarily a verbatim quote as spoken by Drew.)