...[T]he natural history of the rat is tragically similar to that of man ... some of the more obvious qualities in which rats resemble men  ferocity, omnivorousness, and adaptability to all climates ... the irresponsible fecundity with which both species breed at all seasons of the year with a heedlessness of consequences, which subjects them to wholesale disaster on the inevitable, occasional failure of the food supply.... [G]radually, these two have spread across the earth, keeping pace with each other and unable to destroy each other, though continually hostile. They have wandered from East to West, driven by their physical needs, and  unlike any other species of living things  have made war upon their own kind. The gradual, relentless, progressive extermination of the black rat by the brown has no parallel in nature so close as that of the similar extermination of one race of man by another... 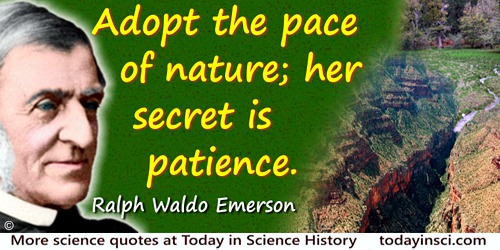 Adopt the pace of nature; her secret is patience.

Always preoccupied with his profound researches, the great Newton showed in the ordinary-affairs of life an absence of mind which has become proverbial. It is related that one day, wishing to find the number of seconds necessary for the boiling of an egg, he perceived, after waiting a minute, that he held the egg in his hand, and had placed his seconds watch (an instrument of great value on account of its mathematical precision) to boil!
This absence of mind reminds one of the mathematician Ampere, who one day, as he was going to his course of lectures, noticed a little pebble on the road; he picked it up, and examined with admiration the mottled veins. All at once the lecture which he ought to be attending to returned to his mind; he drew out his watch; perceiving that the hour approached, he hastily doubled his pace, carefully placed the pebble in his pocket, and threw his watch over the parapet of the Pont des Arts. 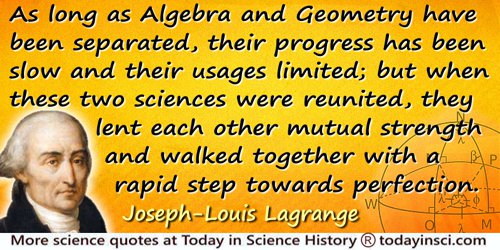 As long as Algebra and Geometry have been separated, their progress has been slow and their usages limited; but when these two sciences were reunited, they lent each other mutual strength and walked together with a rapid step towards perfection.

Eratosthenes of Cyrene, employing mathematical theories and geometrical methods, discovered from the course of the sun, the shadows cast by an equinoctial gnomon, and the inclination of the heaven that the circumference of the earth is two hundred and fifty-two thousand stadia, that is, thirty-one million five hundred thousand paces.

How can you shorten the subject? That stern struggle with the multiplication table, for many people not yet ended in victory, how can you make it less? Square root, as obdurate as a hardwood stump in a pasture nothing but years of effort can extract it. You cant hurry the process. Or pass from arithmetic to algebra; you cant shoulder your way past quadratic equations or ripple through the binomial theorem. Instead, the other way; your feet are impeded in the tangled growth, your pace slackens, you sink and fall somewhere near the binomial theorem with the calculus in sight on the horizon. So died, for each of us, still bravely fighting, our mathematical training; except for a set of people called mathematiciansborn so, like crooks.

If a man does not keep pace with his companions, perhaps it is because he hears a different drummer. Let him step to the music which he hears, however measured and far away.

In our days everything seems pregnant with its contrary. Machinery, gifted with the wonderful power of shortening and fructifying human labor, we behold starving and overworking it . At the same pace that mankind masters nature, man seems to become enslaved to other men or his own infamy. Even the pure light of science seems unable to shine but on the dark background of ignorance.

Psychogenesis has led to man. Now it effaces itself, relieved or absorbed by another and a higher functionthe engendering and subsequent development of the mind, in one word noogenesis. When for the first time in a living creature instinct perceived itself in its own mirror, the whole world took a pace forward.

Sciences usually advances by a succession of small steps, through a fog in which even the most keen-sighted explorer can seldom see more than a few paces ahead. Occasionally the fog lifts, an eminence is gained, and a wider stretch of territory can be surveyed—sometimes with startling results. A whole science may then seem to undergo a kaleidoscopic rearrangement, fragments of knowledge sometimes being found to fit together in a hitherto unsuspected manner. Sometimes the shock of readjustment may spread to other sciences; sometimes it may divert the whole current of human thought.

The pace of science forces the pace of technique. Theoretical physics forces atomic energy on us; the successful production of the fission bomb forces upon us the manufacture of the hydrogen bomb. We do not choose our problems, we do not choose our products; we are pushed, we are forcedby what? By a system which has no purpose and goal transcending it, and which makes man its appendix.

To keep pace with the growth of mathematics, one would have to read about fifteen papers a day, most of them packed with technical details and of considerable length. No one dreams of attempting this task.