...for the animals, which we resemble and which would be our equals if we did not have reason, do not reflect upon the actions or the passions of their external or internal senses, and do not know what is color, odor or sound, or if there is any differences between these objects, to which they are moved rather than moving themselves there. This comes about by the force of the impression that the different objects make on their organs and on their senses, for they cannot discern if it is more appropriate to go and drink or eat or do something else, and they do not eat or drink or do anything else except when the presence of objects or the animal imagination [l'imagination brutalle], necessitates them and transports them to their objects, without their knowing what they do, whether good or bad; which would happen to us just as to them if we were destitute of reason, for they have no enlightenment except what they must have to take their nourishment and to serve us for the uses to which God has destined them.
[Arguing the uniqueness of man by regarding animals to be merely automatons.].

After the discovery of spectral analysis no one trained in physics could doubt the problem of the atom would be solved when physicists had learned to understand the language of spectra. So manifold was the enormous amount of material that has been accumulated in sixty years of spectroscopic research that it seemed at first beyond the possibility of disentanglement. An almost greater enlightenment has resulted from the seven years of Röntgen spectroscopy, inasmuch as it has attacked the problem of the atom at its very root, and illuminates the interior. What we are nowadays hearing of the language of spectra is a true 'music of the spheres' in order and harmony that becomes ever more perfect in spite of the manifold variety. The theory of spectral lines will bear the name of Bohr for all time. But yet another name will be permanently associated with it, that of Planck. All integral laws of spectral lines and of atomic theory spring originally from the quantum theory. It is the mysterious organon on which Nature plays her music of the spectra, and according to the rhythm of which she regulates the structure of the atoms and nuclei.

All men seek to be enlightened. Religion is but the most ancient and honorable way in which men have striven to make sense out of God's universe. Scientists seek the lawfulness of events. It is the task of Religion to fit man into this lawfulness.

I am afraid that education is conceived more in terms of indoctrination by most school officials than in terms of enlightenment.

As quoted, without citation, in Ronald William Clark, The Life of Bertrand Russell (1976), 423.

I am an old man now, and when I die and go to heaven, there are two matters on which I hope for enlightenment. One is quantum electrodynamics and the other is the turbulent motion of fluids. About the former, I am really rather optimistic.

In Address to the British Society for the Advancement of Science (1932). As cited by Tom Mullin in 'Turbulent Times For FLuids', New Science (11 Nov 1989), 52. Werner Heisenberg is also reported, sometimes called apocryphal, to have expressed a similar sentiment, but Webmaster has found no specific citation.

If today you can take a thing like evolution and make it a crime to teach it in the public schools, tomorrow you can make it a crime to teach it in the private schools, and next year you can make it a crime to teach it to the hustings or in the church. At the next session you may ban books and the newspapers. Soon you may set Catholic against Protestant and Protestant against Protestant, and try to foist your own religion upon the minds of men. If you can do one you can do the other. Ignorance and fanaticism are ever busy and need feeding. Always it is feeding and gloating for more. Today it is the public school teachers; tomorrow the private. The next day the preachers and the lecturers, the magazines, the books, the newspapers. After a while, Your Honor, it is the setting of man against man and creed against creed until with flying banners and beating drums we are marching backward to the glorious ages of the sixteenth century when bigots lighted fagots to burn the men who dared to bring any intelligence and enlightenment and culture to the human mind.

Darrows concluding remarks before adjournment of the second day of the Scopes Monkey Trial, Dayton, Tennessee (Monday, 13 Jul 1925). In The World's Most Famous Court Trial: Tennessee Evolution Case: a Complete Stenographic Report of the Famous Court Test of the Tennessee Anti-Evolution Act, at Dayton, July 10 to 21, 1925 (1925), Second Day's Proceedings, 87.

In the search for truth there are certain questions that are not important. Of what material is the universe constructed? Is the universe eternal? Are there limits or not to the universe? ... If a man were to postpone his search and practice for Enlightenment until such questions were solved, he would die before he found the path.

It is not easy to convey, unless one has experienced it, the dramatic feeling of sudden enlightenment that floods the mind when the right idea finally clinches into place. 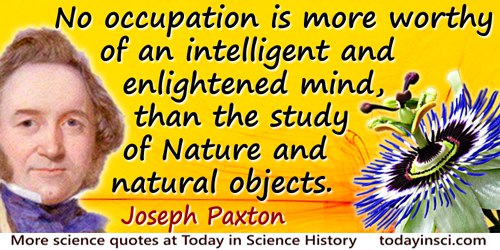 No occupation is more worthy of an intelligent and enlightened mind, than the study of Nature and natural objects; and whether we labour to investigate the structure and function of the human system, whether we direct our attention to the classification and habits of the animal kingdom, or prosecute our researches in the more pleasing and varied field of vegetable life, we shall constantly find some new object to attract our attention, some fresh beauties to excite our imagination, and some previously undiscovered source of gratification and delight.

One only passes from the darkness of ignorance to the enlightenment of science if one re-reads with ever-increasing love the works of the ancients. Let the dogs bark, let the pigs grunt! I will nonetheless be a disciple of the ancients. All my care will be for them and the dawn will see me studying them.

Since my first discussions of ecological problems with Professor John Day around 1950 and since reading Konrad Lorenz's King Solomon's Ring, I have become increasingly interested in the study of animals for what they might teach us about man, and the study of man as an animal. I have become increasingly disenchanted with what the thinkers of the so-called Age of Enlightenment tell us about the nature of man, and with what the formal religions and doctrinaire political theorists tell us about the same subject.

The genius of Man in our time has gone into jet-propulsion, atom-splitting, penicillin-curing, etc. There is left none over for works of imagination; of spiritual insight or mystical enlightenment. I asked for bread and was given a tranquilizer. It is important to recognize that in our time man has not written one word, thought one thought, put two notes or two bricks together, splashed color on to canvas or concrete into space, in a manner which will be of any conceivable imaginative interest to posterity.

The joy of suddenly learning a former secret and the joy of suddenly discovering a hitherto unknown truth are the same to meboth have the flash of enlightenment, the almost incredibly enhanced vision, and the ecstasy and euphoria of released tension.

These days I am not bothering about
Getting enlightenment all the time.
And the result is that
I wake up in the morning feeling fine.

What led me to my science and what fascinated me from a young age was the, by no means self-evident, fact that our laws of thought agree with the regularities found in the succession of impressions we receive from the external world, that it is thus possible for the human being to gain enlightenment regarding these regularities by means of pure thought

[The] erroneous assumption is to the effect that the aim of public education is to fill the young of the species with knowledge and awaken their intelligence, and so make them fit to discharge the duties of citizenship in an enlightened and independent manner. Nothing could be further from the truth. The aim of public education is not to spread enlightenment at all; it is simply to reduce as many individuals as possible to the same safe level, to breed and train a standardised citizenry, to put down dissent and originality.