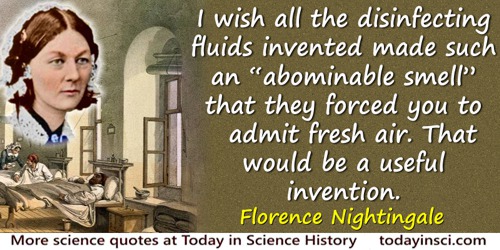 A celebrated medical lecturer began one day Fumigations, gentlemen, are of essential importance. They make such an abominable smell that they compel you to open the window. I wish all the disinfecting fluids invented made such an abominable smell that they forced you to admit fresh air. That would be a useful invention.

A lecturer should  give them [the audience] full reason to believe that all his powers have been exerted for their pleasure and instruction.

In Letter to his friend Benjamin Abbott (11 Jun 1813), collected in Bence Jones, Life and Letters of Faraday, Vol. 1, 73. Faraday was age 21, less than a year since completing his bookbinder apprenticeship, and had decided upon giving up trade and taking to science. From several letters, various opinions about lecturing were gathered in an article, 'Faraday on Scientific Lecturing', Norman Locker (ed.), Nature (23 Oct 1873), 8, 524.

I saw [Linus Pauling] as a brilliant lecturer and a man with a fantastic memory, and a great, great showman. I think he was the centurys greatest chemist. No doubt about it.

From transcript of audio of Max Perutz in BBC programme, 'Lifestory: Linus Pauling' (1997). On 'Linus Pauling and the Race for DNA' webpage 'I Wish I Had Made You Angry Earlier.'

I wish the lecturers to treat their subject as a strictly natural science, the greatest of all possible sciences, indeed, in one sense, the only science, that of Infinite Being, without reference to or reliance upon any supposed special exception or so-called miraculous revelation. I wish it considered just as astronomy or chemistry is.
Statement in deed of foundation of the Gifford Lectures on natural theology (1885).

If today you can take a thing like evolution and make it a crime to teach it in the public schools, tomorrow you can make it a crime to teach it in the private schools, and next year you can make it a crime to teach it to the hustings or in the church. At the next session you may ban books and the newspapers. Soon you may set Catholic against Protestant and Protestant against Protestant, and try to foist your own religion upon the minds of men. If you can do one you can do the other. Ignorance and fanaticism are ever busy and need feeding. Always it is feeding and gloating for more. Today it is the public school teachers; tomorrow the private. The next day the preachers and the lecturers, the magazines, the books, the newspapers. After a while, Your Honor, it is the setting of man against man and creed against creed until with flying banners and beating drums we are marching backward to the glorious ages of the sixteenth century when bigots lighted fagots to burn the men who dared to bring any intelligence and enlightenment and culture to the human mind.

Darrows concluding remarks before adjournment of the second day of the Scopes Monkey Trial, Dayton, Tennessee (Monday, 13 Jul 1925). In The World's Most Famous Court Trial: Tennessee Evolution Case: a Complete Stenographic Report of the Famous Court Test of the Tennessee Anti-Evolution Act, at Dayton, July 10 to 21, 1925 (1925), Second Day's Proceedings, 87.

In a University we are especially bound to recognise not only the unity of science itself, but the communion of the workers in science. We are too apt to suppose that we are congregated here merely to be within reach of certain appliances of study, such as museums and laboratories, libraries and lecturers, so that each of us may study what he prefers. I suppose that when the bees crowd round the flowers it is for the sake of the honey that they do so, never thinking that it is the dust which they are carrying from flower to flower which is to render possible a more splendid array of flowers, and a busier crowd of bees, in the years to come. We cannot, therefore, do better than improve the shining hour in helping forward the cross-fertilization of the sciences.

Langmuir is the most convincing lecturer that I have ever heard. I have heard him talk to an audience of chemists when I knew they did not understand more than one-third of what he was saying; but they thought they did. Its very easy to be swept off one's feet by Langmuir. You remember in [Kiplings novel] Kim that the water jar was broken and Lurgan Sahib was trying to hypnotise Kim into seeing it whole again. Kim saved himself by saying the multiplication table [so] I have heard Langmuir lecture when I knew he was wrong, but I had to repeat to myself: He is wrong; I know he is wrong; he is wrong, or I should have believed like the others.

LECTURER, n. One with his hand in your pocket, his tongue in your ear and his faith in your patience.

Our popular lecturers on physics present us with chains of deductions so highly polished that it is a luxury to let them slip from end to end through our fingers. But they leave nothing behind but a vague memory of the sensation they afforded.

Running overtime is the one unforgivable error a lecturer can make. After fifty minutes (one microcentury as von Neumann used to say) everybody's attention will turn elsewhere.

The personal views of the lecturer may seem to be brought forward with undue exclusiveness, but, as it is his business to give a clear exposition of the actual state of the science which he treats, he is obliged to define with precision the principles, the correctness of which he has proved by his own experience.