In a 1852 letter, Nightingale records the opinion of a young surgeon:
The account he gives of nurses beats everything that even I know of. This young prophet says that they are all drunkards, without exception, Sisters and all, and that there are but two whom the surgeon can trust to give the patients their medicines. 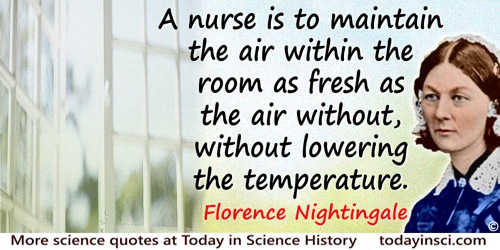 A nurse is to maintain the air within the room as fresh as the air without, without lowering the temperature.

A rash of dermatologists, a hive of allergists, a scrub of interns, a giggle of nurses, a flood of urologists, a pile of proctologists, an eyeful of ophthalmologists, a whiff of anesthesiologists, a cast of orthopaedic rheumatologists, a gargle of laryngologists.

After two days in the hospital, I took a turn for the nurse.

Beggars in the streets of London were at that time leading the lives of princes, compared to the life of our soldiers in the Crimea when I arrived on the scene with thirty-six nurses.

For it may safely be said, not that the habit of ready and correct observation will by itself make us useful nurses, but that without it we shall be useless with all our devotion.

High school counselors would try to railroad Hispanic students into the AD nursing programs. Im proud of the fact that weve [National Association of Hispanic Nurses] been able to push more of our nurses on to earn doctoral degrees. We now have a number of Hispanic doctoral nurses who are very good at research and have been recognized worldwide for their studies. For example, Mary Lou de Leon Siantz has done work with Mexican migrant families that was truly ground-breaking.

As quoted in 'Minority Mental Health: Shining a Light on Unique Needs and Situations', Minority Nurse (30 Mar 2013) online at minoritynurse.com

Hospitals are only an intermediate stage of civilization, never intended ... to take in the whole sick population. May we hope that the day will come ... when every poor sick person will have the opportunity of a share in a district sick-nurse at home.

In 'Nursing of the Sick' paper, collected in Hospitals, Dispensaries and Nursing: Papers and Discussions in the International Congress of Charities, Correction and Philanthropy, Section III, Chicago, June 12th to 17th, 1893 (1894), 457.

I began to realize that something had to be done about this. I saw that I was the only Hispanic nurse who was going to Washington to work with the federal government, review research and education grants, etc. There was nobody else. I looked behind me and thought: Where are my people?

Explaining that in 1975, there was no unified voiceno national organizationto speak up in advocacy for the unique cultural concerns of Hispanic nurses. As quoted in 'Minority Mental Health: Shining a Light on Unique Needs and Situations', Minority Nurse (30 Mar 2013) online at minoritynurse.com

I believe that nursing is the compassionate, effective, and humane care given by one who is educated and trained in the art and science of nursing to someone who is in need of help because of problems in health or in activities of his daily life.

I remember being with my grandmother and mother and my uncle came in and asked what I wanted to be when grew up. I said A doctor, which took him aback. He was expecting me to say nurse or actress. And my mother and grandmother laughed like, Kids say the darndest things. I grew up in a time when women were not expected to do anything interesting.

I use the word nursing for want of a better. It has been limited to signify little more than the administration of medicines and the application of poultices. It ought to signify the proper use of fresh air, light, warmth, cleanliness, quiet, and the proper selection and administration of dietall at the least expense of vital power to the patient.

If a patient is poor he is committed to a public hospital as a 'psychotic.' If he can afford a sanitarium, the diagnosis is 'neurasthenia.' If he is wealthy enough to be in his own home under the constant watch of nurses and physicians, he is simply 'an indisposed eccentric.'

IN MEMORIAM: FLORENCE NIGHTINGALE
She whom we love, our Lady of Compassion,
Can never die, for Love forbids her death.
Love has bent down in his old kindly fashion,
And breathed upon her his immortal breath.
On wounded soldiers, in their anguish lying,
Her gentle spirit shall descend like rain.
Where the white flag with the red cross is flying,
There shall she dwell, the vanquisher of pain.
[In remembrance of 'The Lady of the Lamp' who died 13 Aug 1910.]

Life is short, the Art long, opportunity fleeting, experience treacherous, judgment difficult. The physician must be ready, not only to do his duty himself, but also to secure the co-operation of the patient, of the attendants and of externals.

MAMMALIA, n. pl. A family of vertebrate animals whose females in a state of nature suckle their young, but when civilized and enlightened put them out to nurse, or use the bottle.

No man, not even a doctor, ever gives any other definition of what a nurse should be than thisdevoted and obedient. This definition would do just as well for a porter. It might even do for a horse. It would not do for a policeman.

Nurse, it was I who discovered that leeches have red blood.

Nurses that attend lying-in women ought to have provided, and in order, every thing that may be necessary for the woman, accoucheur, midwife, and child; such as linnen and cloaths, well aired and warm, for the woman and the bed, which she must know how to prepare when there is occasion; together with nutmeg, sugar, spirit of hartshorn, vinegar, Hungary water, white or brown caudle ready made, and a glyster-pipe fitted.

Nurses, as well as midwives, ought to be of middle age, sober, patient, and discreet, able to bear fatigue and watching, free from external deformity, cutaneous eruptions, and inward complaints that may be troublesome or infectious.

Nursing at its highest level encompasses the teaching of the individual to know his body and its functions for the maintenance and promotion of health and prevention of disease. Self-care can be, and is, very efficacious when people are encouraged and guided to learn to care for themselves, whenever possible.

Nursing does not diminish the beauty of a womans breasts; it enhances their charm by making them look lived in and happy. 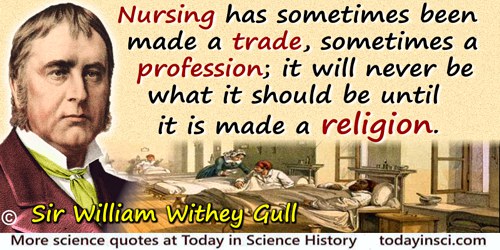 Nursing has sometimes been made a trade, sometimes a profession; it will never be what it should be until it is made a religion.

The external world of physics has  become a world of shadows. In removing our illusions we have removed the substance, for indeed we have seen that substance is one of the greatest of our illusions. Later perhaps we may inquire whether in our zeal to cut out all that is unreal we may not have used the knife too ruthlessly. Perhaps, indeed, reality is a child which cannot survive without its nurse illusion. But if so, that is of little concern to the scientist, who has good and sufficient reasons for pursuing his investigations in the world of shadows and is content to leave to the philosopher the determination of its exact status in regard to reality.

In Introduction to The Nature of the Physical World (1928), xiv.

The trained nurse has given nursing the human, or shall we say, the divine touch, and made the hospital desirable for patients with serious ailments regardless of their home advantages.

The very elements of what constitutes good nursing are as little understood for the well as for the sick. The same laws of health, or of nursing, for they are in reality the same, obtain among the well as among the sick.

Too often a sister puts all her patients back to bed as a housewife puts all her plates back in the plate-rack—to make a generally tidy appearance.

We grow great by dreams. All big men are dreamers. They see things in the soft haze of a spring day or in the red fire of a long winters evening. Some of us let these great dreams die, but others nourish and protect them; nurse them through bad days till they bring them to the sunshine and light which comes always to those who sincerely hope that their dreams will come true.

Quoted, for example, in The American Exporter (1930), Vol. 106, 158. Webmaster has found this quote in numerous texts, but as yet has not identified the original. (Can you help?)

We have done a lot but we need to do more. We want to continue to increase our membership. As I travel, I still hear Hispanic nurses saying, I didnt know that we had [an organization like NAHN].

NAHN is the National Association of Hispanic Nurses. As quoted in 'Minority Mental Health: Shining a Light on Unique Needs and Situations', Minority Nurse (30 Mar 2013) online at minoritynurse.com