... [I]nfectious disease is merely a disagreeable instance of a widely prevalent tendency of all living creatures to save themselves the bother of building, by their own efforts, the things they require. Whenever they find it possible to take advantage of the constructive labors of others, this is the path of least resistance. The plant does the work with its roots and its green leaves. The cow eats the plant. Man eats both of them; and bacteria (or investment bankers) eat the man. ...

By encouraging conservation, increasing investments in clean, renewable sources of energy, and promoting increased domestic production of oil and gas, we can build a more secure future for our country.

I would like to see us continue to explore space. There's just a lot for us to keep learning. I think its a good investment, so on my list of things that I want our country to invest inin terms of research and innovation and science, basic science, exploring space, exploring our oceans, exploring our genomewere at the brink of all kinds of new information. Let's not back off now! 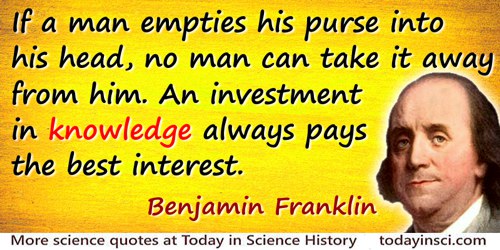 If a man empties his purse into his head, no man can take it away from him. An investment in knowledge always pays the best interest.

If Russia is to be a great power, it will be, not because of its nuclear potential, faith in God or the president, or Western investment, but thanks to the labor of the nation, faith in knowledge and science and the maintenance and development of scientific potential and education.

In the space of one hundred and seventy-six years the Lower Mississippi has shortened itself two hundred and forty-two miles. That is an average of a trifle over one mile and a third per year. Therefore, any calm person, who is not blind or idiotic, can see that in the old Oolitic Silurian Period, must a million years ago next November, the Lower Mississippi River was upward of one million three hundred thousand miles long, and stuck out over the Gulf of Mexico like a fishing-rod. And by the same token any person can see that seven hundred and forty-two years from now the Lower Mississippi will be only a mile and three-quarters long, and Cairo and New Orleans will have their streets joined together, and be plodding comfortably along under a single mayor and a mutual board of aldermen. There is something fascinating about science. One gets such wholesale returns of conjecture out of such a trifling investment of fact.

No other subject has such clear-cut or unanimously accepted standards, and the men who are remembered are almost always the men who merit it. Mathematical fame, if you have the cash to pay for it, is one of the soundest and steadiest of investments.

Of all investments into the future, the conquest of space demands the greatest efforts and the longest-term commitment but it also offers the greatest reward: none less than a universe.

That a shutdown of existing reactors would be catastrophic I believe is self-evident. It is not only the energy that we would lose, it is the $100 billion investment whose write-off would cause a violent shock to our financial institutions.

There is no plea which will justify the use of high-tension and alternating currents, either in a scientific or a commercial sense. They are employed solely to reduce investment in copper wire and real estate.

Unavoidably, physics is usually expensive, and too many physicists find themselves with outdated or incomplete apparatus. The average factory worker in the United States has his productivity supported by a capital investment of $25,000 in machines and equipment. If physicists engaged in small science were as well supported as the average factory worker, they would share a total of ¾ billion dollars of depreciated equipment. I seriously doubt that they are that well supported.