... [I]nfectious disease is merely a disagreeable instance of a widely prevalent tendency of all living creatures to save themselves the bother of building, by their own efforts, the things they require. Whenever they find it possible to take advantage of the constructive labors of others, this is the path of least resistance. The plant does the work with its roots and its green leaves. The cow eats the plant. Man eats both of them; and bacteria (or investment bankers) eat the man. ... 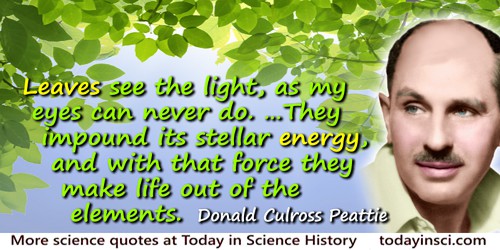 As the brain of man is the speck of dust in the universe that thinks, so the leavesthe fern and the needled pine and the latticed frond and the seaweed ribbonperceive the light in a fundamental and constructive sense.  Their leaves see the light, as my eyes can never do.  They impound its stellar energy, and with that force they make life out of the elements.

In the study of this membrane [the retina] I for the first time felt my faith in Darwinism (hypothesis of natural selection) weakened, being amazed and confounded by the supreme constructive ingenuity revealed not only in the retina and in the dioptric apparatus of the vertebrates but even in the meanest insect eye. ... I felt more profoundly than in any other subject of study the shuddering sensation of the unfathomable mystery of life.

It would be a mistake to suppose that a science consists entirely of strictly proved theses, and it would be unjust to require this. Only a disposition with a passion for authority will raise such a demand, someone with a craving to replace his religious catechism by another, though it is a scientific one. Science has only a few apodeictic propositions in its catechism: the rest are assertions promoted by it to some particular degree of probability. It is actually a sign of a scientific mode of thought to find satisfaction in these approximations to certainty and to be able to pursue constructive work further in spite of the absence of final confirmation.

In Introductory Lectures on Psycho-Analysis (1916-17).

Nothing that you do in science is guaranteed to result in benefits for mankind. Any discovery, I believe, is morally neutral and it can be turned either to constructive ends or destructive ends. Thats not the fault of science.

Our time is distinguished by wonderful achievements in the fields of scientific understanding and the technical application of those insights. Who would not be cheered by this? But let us not forget that human knowledge and skills alone cannot lead humanity to a happy and dignified life. Humanity has every reason to place the proclaimers of high moral standards and values above the discoverers of objective truth. What humanity owes to personalities like Buddha, Moses, and Jesus ranks for me higher than all the achievements of the inquiring constructive mind.

Science is in a literal sense constructive of new facts. It has no fixed body of facts passively awaiting explanation, for successful theories allow the construction of new instrumentselectron microscopes and deep space probesand the exploration of phenomena that were beyond descriptionthe behavior of transistors, recombinant DNA, and elementary particles, for example. This is a key point in the progressive nature of sciencenot only are there more elegant or accurate analyses of phenomena already known, but there is also extension of the range of phenomena that exist to be described and explained.
Co-author with Michael A. Arbib, English-born professor of computer science and biomedical engineering (1940-)

Superstition may be defined as constructive religion which has grown incongruous with intelligence.

The question of the origin of the hypothesis belongs to a domain in which no very general rules can be given; experiment, analogy and constructive intuition play their part here. But once the correct hypothesis is formulated, the principle of mathematical induction is often sufficient to provide the proof.

We find that one of the most rewarding features of being scientists these days ... is the common bond which the search for truth provides to scholars of many tongues and many heritages. In the long run, that spirit will inevitably have a constructive effect on the benefits which man can derive from knowledge of himself and his environment.

Who has studied the works of such men as Euler, Lagrange, Cauchy, Riemann, Sophus Lie, and Weierstrass, can doubt that a great mathematician is a great artist? The faculties possessed by such men, varying greatly in kind and degree with the individual, are analogous with those requisite for constructive art. Not every mathematician possesses in a specially high degree that critical faculty which finds its employment in the perfection of form, in conformity with the ideal of logical completeness; but every great mathematician possesses the rarer faculty of constructive imagination.

Widespread intellectual and moral docility may be convenient for leaders in the short term, but it is suicidal for nations in the long term. One of the criteria for national leadership should therefore be a talent for understanding, encouraging, and making constructive use of vigorous criticism.

Billions and Billions: Thoughts on Life and Death at the Brink of the Millenium (1998), 189.