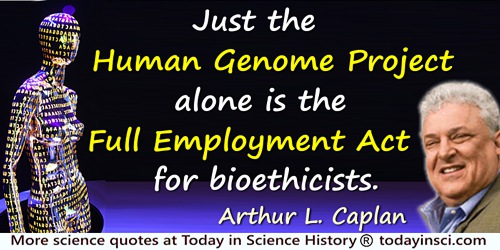 A moral principle in genetic testing is that it should always be done with the consent of the individual. No one wants someone snooping into his DNA.

If people think that the parts are treated like commodities, bought and sold, they may be much less willing to give. Bodies aren't the same as Coca-Cola cans.
Commenting on the discovery of five human heads in a leaking package by a parcel carrier company during transit from Philadelphia to Denver.

It might be argued that a genetically enhanced athlete, like a drug-enhanced one, would have an unfair advantage over his unenhanced competitors. But the fairness argument against enhancement has a fatal flaw: it has always been the case that some athletes are better endowed genetically than others, and yet we do not consider this to undermine the fairness of competitive sports. From the standpoint of fairness, enhanced genetic differences would be no worse than natural ones, assuming they were safe and made available to all. If genetic enhancement in sports is morally objectionable, it must be for reasons other than fairness.

Just the Human Genome Project alone is the Full Employment Act for bioethicists.

Nothing that you do in science is guaranteed to result in benefits for mankind. Any discovery, I believe, is morally neutral and it can be turned either to constructive ends or destructive ends. Thats not the fault of science.

People ask, Is the science going to run ahead of the ethics? I don't think thats always the problem. I think its that the science runs ahead of the politics. Bioethics can alert people to something coming down the road, but it doesn't mean policy and politicians are going to pay attention. They tend to respond when theres an immediate crisis. The job of the ethicist, in some ways, is to warn or be prophetic. You can yell loudly, but you cant necessarily get everybody to leave the cinema, so to speak.

Interview by Karen Pallarito in The Scientist (Jan 2008), supplement, 74.

Some see a clear line between genetic enhancement and other ways that people seek improvement in their children and themselves. Genetic manipulation seems somehow worsemore intrusive, more sinisterthan other ways of enhancing performance and seeking success. But, morally speaking, the difference is less significant than it seems. Bioengineering gives us reason to question the low-tech, high-pressure child-rearing practices we commonly accept. The hyperparenting familiar in our time represents an anxious excess of mastery and dominion that misses the sense of life as a gift. This draws it disturbingly close to eugenics... Was the old eugenics objectionable only insofar as it was coercive? Or is there something inherently wrong with the resolve to deliberately design our progenys traits... But removing coercion does not vindicate eugenics. The problem with eugenics and genetic engineering is that they represent a one-sided triumph of willfulness over giftedness, of dominion over reverence, of molding over beholding.

The challenge is for bioethicists to position themselves to be on panels, boards and other decision making bodies where public policy positions will be establishedwhere the exploding changes in health care that are now underway will be addressed.

The use of fetuses as organ and tissue donors is a ticking time bomb of bioethics.

There has never been just 'coach class' health care, but with these amenities you are seeing people get priorities according to your ability to pay. It's one thing to say you get perks; it's another to say you can buy your way to the head of the line.

When you're talking deaths in clinical trials, mistakes are not an option. It's just an area where we have to have absolute, foolproof reporting in place.