Original French quoted in René Vallery-Radot, La Vie de Pasteur (1901), 209. Translation by Google translate, tweaked by Webmaster. The English version of the book, omits this passage, except for Science, which brings man nearer to God. In The Life of Pasteur (1902), Vol. 1, 194.

Energy is the inherent effort of every multiplicity to become unity.

Human societies are everywhere complex, for living at peace with ourselves requires a vast multiplicity of rules.

Epigraph in Isaac Asimovs Book of Science and Nature Quotations (1988), 18.

I believed that, instead of the multiplicity of rules that comprise logic, I would have enough in the following four, as long as I made a firm and steadfast resolution never to fail to observe them.
The first was never to accept anything as true if I did not know clearly that it was so; that is, carefully to avoid prejudice and jumping to conclusions, and to include nothing in my judgments apart from whatever appeared so clearly and distinctly to my mind that I had no opportunity to cast doubt upon it.
The second was to subdivide each on the problems I was about to examine: into as many parts as would be possible and necessary to resolve them better.
The third was to guide my thoughts in an orderly way by beginning, as if by steps, to knowledge of the most complex, and even by assuming an order of the most complex, and even by assuming an order among objects in! cases where there is no natural order among them.
And the final rule was: in all cases, to make such comprehensive enumerations and such general review that I was certain not to omit anything.
The long chains of inferences, all of them simple and easy, that geometers normally use to construct their most difficult demonstrations had given me an opportunity to think that all the things that can fall within the scope of human knowledge follow from each other in a similar way, and as long as one avoids accepting something as true which is not so, and as long as one always observes the order required to deduce them from each other, there cannot be anything so remote that it cannot be reached nor anything so hidden that it cannot be uncovered.

I have said that mathematics is the oldest of the sciences; a glance at its more recent history will show that it has the energy of perpetual youth. The output of contributions to the advance of the science during the last century and more has been so enormous that it is difficult to say whether pride in the greatness of achievement in this subject, or despair at his inability to cope with the multiplicity of its detailed developments, should be the dominant feeling of the mathematician. Few people outside of the small circle of mathematical specialists have any idea of the vast growth of mathematical literature. The Royal Society Catalogue contains a list of nearly thirty- nine thousand papers on subjects of Pure Mathematics alone, which have appeared in seven hundred serials during the nineteenth century. This represents only a portion of the total output, the very large number of treatises, dissertations, and monographs published during the century being omitted.

In Presidential Address British Association for the Advancement of Science, Sheffield, Section A, Nature (1 Sep 1910), 84, 285.

I should like to compare this rearrangement which the proteins undergo in the animal or vegetable organism to the making up of a railroad train. In their passage through the body parts of the whole may be left behind, and here and there new parts added on. In order to understand fully the change we must remember that the proteins are composed of Bausteine united in very different ways. Some of them contain Bausteine of many kinds. The multiplicity of the proteins is determined by many causes, first through the differences in the nature of the constituent Bausteine; and secondly, through differences in the arrangement of them. The number of Bausteine which may take part in the formation of the proteins is about as large as the number of letters in the alphabet. When we consider that through the combination of letters an infinitely large number of thoughts may be expressed, we can understand how vast a number of the properties of the organism may be recorded in the small space which is occupied by the protein molecules. It enables us to understand how it is possible for the proteins of the sex-cells to contain, to a certain extent, a complete description of the species and even of the individual. We may also comprehend how great and important the task is to determine the structure of the proteins, and why the biochemist has devoted himself with so much industry to their analysis.

Know, oh Brother (May God assist thee and us by the Spirit from Him) that God, Exalted Be His Praise, when He created all creatures and brought all things into being, arranged them and brought them into existence by a process similar to the process of generation of numbers from one, so that the multiplicity [of numbers] should be a witness to his Oneness, and their classification and order an indication of the perfection of His wisdom in creation. And this would be a witness to the fact, too, that they [creatures] are related to Him who created them, in the same way as the numbers are related to the One which is prior to two, and which is the principle, origin and source of numbers, as we have shown in our treatise on arithmetic.

Multiplicity is only apparent, in truth, there is only one mind.

The humanities and science are not in inherent conflict but have become separated in the twentieth century. Now their essential unity must be re-emphasized so that 20th Century multiplicity may become 20th Century unity.

The mathematical intellectualism is henceforth a positive doctrine, but one that inverts the usual doctrines of positivism: in place of originating progress in order, dynamics in statics, its goal is to make logical order the product of intellectual progress. The science of the future is not enwombed, as Comte would have had it, as Kant had wished it, in the forms of the science already existing; the structure of these forms reveals an original dynamism whose onward sweep is prolonged by the synthetic generation of more and more complicated forms. No speculation on number considered as a category a priori enables one to account for the questions set by modern mathematics  space affirms only the possibility of applying to a multiplicity of any elements whatever, relations whose type the intellect does not undertake to determine in advance, but, on the contrary, it asserts their existence and nourishes their unlimited development.

The multiplicity is only apparent. This is the doctrine of the Upanishads. And not of the Upanishads only. The mystical experience of the union with God regularly leads to this view, unless strong prejudices stand in the West.

There is obviously only one alternative, namely the unification of minds or consciousnesses. Their multiplicity is only apparent, in truth there is only one mind. 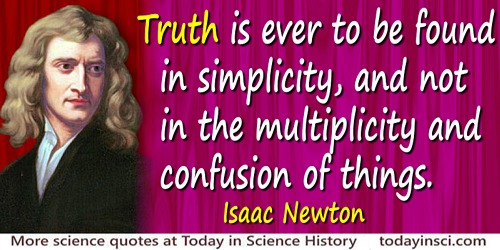 Truth is ever to be found in simplicity, and not in the multiplicity and confusion of things.