[When recording electrical impulses from a frog nerve-muscle preparation seemed to show a tiresomely oscillating electrical artefactbut only when the muscle was hanging unsupported.] The explanation suddenly dawned on me ... a muscle hanging under its own weight ought, if you come to think of it, to be sending sensory impulses up the nerves coming from the muscle spindles ... That particular days work, I think, had all the elements that one could wish for. The new apparatus seemed to be misbehaving very badly indeed, and I suddenly found it was behaving so well that it was opening up an entire new range of data ... it didnt involve any particular hard work, or any particular intelligence on my part. It was just one of those things which sometimes happens in a laboratory if you stick apparatus together and see what results you get. 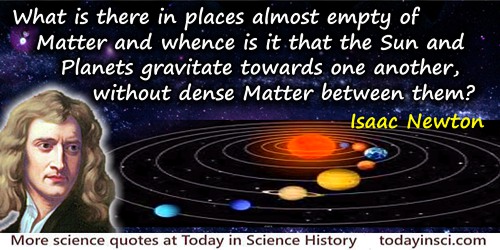 And for rejecting such a Medium, we have the Authority of those the oldest and most celebrated Philosophers of Greece and Phoenicia, who made a Vacuum, and Atoms, and the Gravity of Atoms, the first Principles of their Philosophy; tacitly attributing Gravity to some other Cause than dense Matter. Later Philosophers banish the Consideration of such a Cause out of natural Philosophy, feigning Hypotheses for explaining all things mechanically, and referring other Causes to Metaphysicks: Whereas the main Business of natural Philosophy is to argue from Phaenomena without feigning Hypotheses, and to deduce Causes from Effects, till we come to the very first Cause, which certainly is not mechanical; and not only to unfold the Mechanism of the World, but chiefly to resolve these and such like Questions. What is there in places almost empty of Matter, and whence is it that the Sun and Planets gravitate towards one another, without dense Matter between them? Whence is it that Nature doth nothing in vain; and whence arises all that Order and Beauty which we see in the World? ... does it not appear from phaenomena that there is a Being incorporeal, living, intelligent, omnipresent, who in infinite space, as it were in his Sensory, sees the things themselves intimately, and thoroughly perceives them, and comprehends them wholly by their immediate presence to himself.

Casting off the dark fog of verbal philosophy and vulgar medicine, which inculcate names alone ... I tried a series of experiments to explain more clearly many phenomena, particularly those of physiology. In order that I might subject as far as possible the reasonings of the Galenists and Peripatetics to sensory criteria, I began, after trying experiments, to write dialogues in which a Galenist adduced the better-known and stronger reasons and arguments; these a mechanist surgeon refuted by citing to the contrary the experiments I had tried, and a third, neutral interlocutor weighed the reasons advanced by both and provided an opportunity for further progress.

I have never had reason, up to now, to give up the concept which I have always stressed, that nerve cells, instead of working individually, act together, so that we must think that several groups of elements exercise a cumulative effect on the peripheral organs through whole bundles of fibres. It is understood that this concept implies another regarding the opposite action of sensory functions. However opposed it may seem to the popular tendency to individualize the elements, I cannot abandon the idea of a unitary action of the nervous system, without bothering if, by that, I approach old conceptions.

It is my thesis that the physical functioning of the living individual and the operation of some of the newer communication machines are precisely parallel in their analogous attempts to control entropy through feedback. Both of them have sensory receptors as one stage in their cycle of operation: that is, in both of them there exists a special apparatus for collecting information from the outer world at low energy levels, and for making it available in the operation of the individual or of the machine. In both cases these external messages are not taken neat, but through the internal transforming powers of the apparatus, whether it be alive or dead. The information is then turned into a new form available for the further stages of performance. In both the animal and the machine this performance is made to be effective on the outer world. In both of them, their performed action on the outer world, and not merely their intended aetion, is reported back to the central regulatory apparatus.

Let us suppose that an ichthyologist is exploring the life of the ocean. He casts a net into the water and brings up a fishy assortment. Surveying his catch, he proceeds in the usual manner of a scientist to systematise what it reveals. He arrives at two generalisations:
(1) No sea-creature is less than two inches long.
(2) All sea-creatures have gills.
These are both true of his catch, and he assumes tentatively that they will remain true however often he repeats it.
In applying this analogy, the catch stands for the body of knowledge which constitutes physical science, and the net for the sensory and intellectual equipment which we use in obtaining it. The casting of the net corresponds to observation; for knowledge which has not been or could not be obtained by observation is not admitted into physical science.
An onlooker may object that the first generalisation is wrong. There are plenty of sea-creatures under two inches long, only your net is not adapted to catch them. The icthyologist dismisses this objection contemptuously. Anything uncatchable by my net is ipso facto outside the scope of icthyological knowledge. In short, what my net can't catch isn't fish. Orto translate the analogyIf you are not simply guessing, you are claiming a knowledge of the physical universe discovered in some other way than by the methods of physical science, and admittedly unverifiable by such methods. You are a metaphysician. Bah!

Scientific discovery, or the formulation of scientific theory, starts in with the unvarnished and unembroidered evidence of the senses. It starts with simple observationsimple, unbiased, unprejudiced, naive, or innocent observationand out of this sensory evidence, embodied in the form of simple propositions or declarations of fact, generalizations will grow up and take shape, almost as if some process of crystallization or condensation were taking place. Out of a disorderly array of facts, an orderly theory, an orderly general statement, will somehow emerge.

There are children playing in the street who could solve some of my top problems in physics, because they have modes of sensory perception that I lost long ago.

Unless the structure of the nucleus has a surprise in store for us, the conclusion seems plainthere is nothing in the whole system if laws of physics that cannot be deduced unambiguously from epistemological considerations. An intelligence, unacquainted with our universe, but acquainted with the system of thought by which the human mind interprets to itself the contents of its sensory experience, and should be able to attain all the knowledge of physics that we have attained by experiment.

In Clive William Kilmister, Eddington's Search for a Fundamental Theory (1994), 202.

What distinguishes the language of science from language as we ordinarily understand the word?  What science strives for is an utmost acuteness and clarity of concepts as regards their mutual relation and their correspondence to sensory data.

When carbon (C), Oxygen (o) and hydrogen (H) atoms bond in a certain way to form sugar, the resulting compound has a sweet taste. The sweetness resides neither in the C, nor in the O, nor in the H; it resides in the pattern that emerges from their interaction. It is an emergent property. Moreover, strictly speaking, is not a property of the chemical bonds. It is a sensory experience that arises when the sugar molecules interact with the chemistry of our taste buds, which in turns causes a set of neurons to fire in a certain way. The experience of sweetness emerges from that neural activity.

When external objects are impressed on the sensory nerves, they excite vibrations in the aether residing in the pores of these nerves... Thus it seems that light affects both the optic nerve and the aether and ... the affections of the aether are communicated to the optic nerve, and vice versa. And the same may be observed of frictions of the skin, taste, smells and sounds... Vibrations in the aether will agitate the small particles of the medullary substance of the sensory nerves with synchronous vibrations... up to the brain... These vibrations are motions backwards and forwards of small particles, of the same kind with the oscillations of pendulums, and the tremblings of the particles of the sounding bodies (but) exceedingly short and small, so as not to have the least efficacy to disturb or move the whole bodies of the nerves... That the nerves themselves should vibrate like musical strings is highly absurd.

(T)he same cause, such as electricity, can simultaneously affect all sensory organs, since they are all sensitive to it; and yet, every sensory nerve reacts to it differently; one nerve perceives it as light, another hears its sound, another one smells it; another tastes the electricity, and another one feels it as pain and shock. One nerve perceives a luminous picture through mechanical irritation, another one hears it as buzzing, another one senses it as pain He who feels compelled to consider the consequences of these facts cannot but realize that the specific sensibility of nerves for certain impressions is not enough, since all nerves are sensitive to the same cause but react to the same cause in different ways (S)ensation is not the conduction of a quality or state of external bodies to consciousness, but the conduction of a quality or state of our nerves to consciousness, excited by an external cause.
Law of Specific Nerve Energies.