...sometimes a scream is better than a thesis.

Quoted in Leidraad (1985), 2. (This is a periodical of the University of Leiden, Holland.)

History without the history of science, to alter slightly an apothegm of Lord Bacon, resembles a statue of Polyphemus without his eyethat very feature being left out which most marks the spirit and life of the person. My own thesis is complementary: science taught ... without a sense of history is robbed of those very qualities that make it worth teaching to the student of the humanities and the social sciences.

I could almost wish, at this point, that I were in the habit of expressing myself in theological terms, for if I were, I might be able to compress my entire thesis into a sentence. All knowledge of every variety (I might say) is in the mind of Godand the human intellect, even the best, in trying to pluck it forth can but see through a glass, darkly.

It is my thesis that the physical functioning of the living individual and the operation of some of the newer communication machines are precisely parallel in their analogous attempts to control entropy through feedback. Both of them have sensory receptors as one stage in their cycle of operation: that is, in both of them there exists a special apparatus for collecting information from the outer world at low energy levels, and for making it available in the operation of the individual or of the machine. In both cases these external messages are not taken neat, but through the internal transforming powers of the apparatus, whether it be alive or dead. The information is then turned into a new form available for the further stages of performance. In both the animal and the machine this performance is made to be effective on the outer world. In both of them, their performed action on the outer world, and not merely their intended aetion, is reported back to the central regulatory apparatus.

My main thesis will be that in the study of the intermediate processes of metabolism we have to deal not with complex substances which elude ordinary chemical methods, but with the simple substances undergoing comprehensible reactions... I intend also to emphasise the fact that it is not alone with the separation and identification of products from the animal that our present studies deal; but with their reactions in the body; with the dynamic side of biochemical phenomena.

My thesis is that what we call 'science' is differentiated from the older myths not by being something distinct from a myth, but by being accompanied by a second-order traditionthat of critically discussing the myth.  In a certain sense, science is myth-making just as religion is. 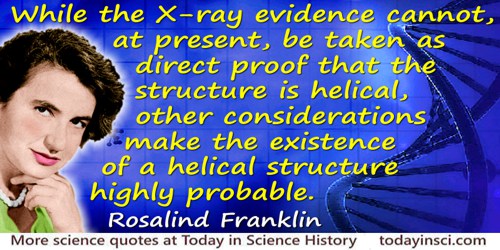 Sodium thymonucleate fibres give two distinct types of X-ray diagram  [structures A and B]. The X-ray diagram of structure B (see photograph) shows in striking manner the features characteristic of helical structures, first worked out in this laboratory by Stokes (unpublished) and by Crick, Cochran and Vand2. Stokes and Wilkins were the first to propose such structures for nucleic acid as a result of direct studies of nucleic acid fibres, although a helical structure had been previously suggested by Furberg (thesis, London, 1949) on the basis of X-ray studies of nucleosides and nucleotides.
While the X-ray evidence cannot, at present, be taken as direct proof that the structure is helical, other considerations discussed below make the existence of a helical structure highly probable.

The authors of literary works may not have intended all the subtleties, complexities, undertones, and overtones that are attributed to them by critics and by students writing doctoral theses. Thats what God says about geologists, I told him...

The average Ph.D. thesis is nothing but a transference of bones from one graveyard to another.

The basic thesis of gestalt theory might be formulated thus: there are contexts in which what is happening in the whole cannot be deduced from the characteristics of the separate pieces, but conversely; what happens to a part of the whole is, in clearcut cases, determined by the laws of the inner structure of its whole.

The difference between a good observer and one who is not good is that the former is quick to take a hint from the facts, from his early efforts to develop skill in handling them, and quick to acknowledge the need to revise or alter the conceptual framework of his thinking. The otherthe poor observercontinues dogmatically onward with his original thesis, lost in a maze of correlations, long after the facts have shrieked in protest against the interpretation put upon them.

In The Social Problems of an Industrial Civilization (1945).

The thesis which I venture to sustain, within limits, is simply this, that the savage state in some measure represents an early condition of mankind, out of which the higher culture has gradually been developed or evolved, by processes still in regular operation as of old, the result showing that, on the whole, progress has far prevailed over relapse. 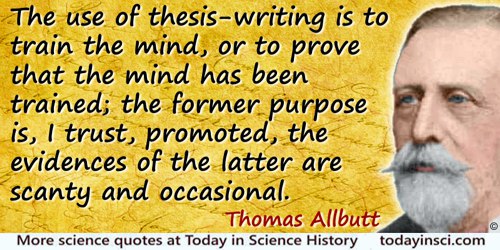 The use of thesis-writing is to train the mind, or to prove that the mind has been trained; the former purpose is, I trust, promoted, the evidences of the latter are scanty and occasional.

From Preface to First Edition to Notes on the Composition of Scientific Papers (1904), v.

Theres a touch of the priesthood in the academic world, a sense that a scholar should not be distracted by the mundane tasks of day-to-day living. I used to have great stretches of time to work. Now I have research thoughts while making peanut butter and jelly sandwiches. Sure its impossible to write down ideas while reading Curious George to a two-year-old. On the other hand, as my husband was leaving graduate school for his first job, his thesis advisor told him, You may wonder how a professor gets any research done when one has to teach, advise students, serve on committees, referee papers, write letters of recommendation, interview prospective faculty. Well, I take long showers.