A good notation has a subtlety and suggestiveness which at times make it almost seem like a live teacher. ŌĆ” a perfect notation would be a substitute for thought.

A mathematician of the first rank, Laplace quickly revealed himself as only a mediocre administrator; from his first work we saw that we had been deceived. Laplace saw no question from its true point of view; he sought subtleties everywhere; had only doubtful ideas, and finally carried the spirit of the infinitely small into administration.

As quoted in E.T. Bell, Men of Mathematics (1937, 1965), 182. Without citation, except, ŌĆ£As it is often quoted as ŌĆ” NapoleonŌĆÖs famous estimate of Laplace, of which he is reported to have delivered himself while he was a prisoner at St. Helena.ŌĆØ Laplace had a six-week tenure in the Ministry of the Interior. 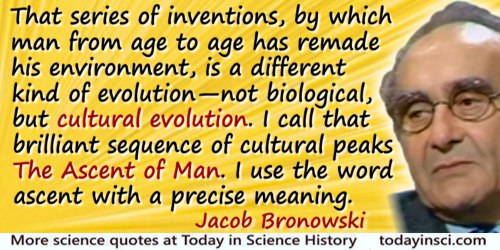 Among the multitude of animals which scamper, fly, burrow and swim around us, man is the only one who is not locked into his environment. His imagination, his reason, his emotional subtlety and toughness, make it possible for him not to accept the environment, but to change it. And that series of inventions, by which man from age to age has remade his environment, is a different kind of evolution—not biological, but cultural evolution. I call that brilliant sequence of cultural peaks The Ascent of Man. I use the word ascent with a precise meaning. Man is distinguished from other animals by his imaginative gifts. He makes plans, inventions, new discoveries, by putting different talents together; and his discoveries become more subtle and penetrating, as he learns to combine his talents in more complex and intimate ways. So the great discoveries of different ages and different cultures, in technique, in science, in the arts, express in their progression a richer and more intricate conjunction of human faculties, an ascending trellis of his gifts.

And when with excellent Microscopes I discern in otherwise invisible Objects the Inimitable Subtlety of NatureŌĆÖs Curious Workmanship; And when, in a word, by the help of Anatomicall Knives, and the light of Chymicall Furnaces, I study the Book of Nature, and consult the Glosses of Aristotle, Epicurus, Paracelsus, Harvey, Helmont, and other learn'd Expositors of that instructive Volumne; I find my self oftentimes reducŌĆÖd to exclaim with the Psalmist, How manifold are thy works, O Lord? In wisdom hast thou made them all.

For many parts of Nature can neither be invented with sufficient subtlety, nor demonstrated with sufficient perspicuity, nor accommodated to use with sufficient dexterity, without the aid and intervention of Mathematic: of which sort are Perspective, Music, Astronomy, cosmography, Architecture, Machinery, and some others.

In De Augmentis, Bk. 3; The Advancement of Learning (1605), Book 3. As translated in Francis Bacon, ‎James Spedding and ‎Robert Leslie Ellis, 'Of the great Appendix of Natural Philosophy, both Speculative and Operative, namely Mathematic; and that it ought rather to be placed among Appendices than among Substantive Sciences. Division of Mathematic into Pure and Mixed', The Works of Francis Bacon (1858), Vol. 4, Chap. 6, 371.

I esteem his understanding and subtlety highly, but I consider that they have been put to ill use in the greater part of his work, where the author studies things of little use or when he builds on the improbable principle of attraction.
Writing about Newton's Principia. Huygens had some time earlier indicated he did not believe the theory of universal gravitation, saying it 'appears to me absurd.'

I have often been amused by our vulgar tendency to take complex issues, with solutions at neither extreme of a continuum of possibilities, and break them into dichotomies, assigning one group to one pole and the other to an opposite end, with no acknowledgment of subtleties and intermediate positionsŌĆōand nearly always with moral opprobrium attached to opponents.

In some respects, science has far surpassed religion in delivering awe. How is it that hardly any major religion has looked at science and concluded, “This is better than we thought! The Universe is much bigger than our prophets said, grander, more subtle, more elegant. God must be even greater than we dreamed”? Instead they say, 'No, no, no! My god is a little god, and I want him to stay that way.'

It cannot be that axioms established by argumentation should avail for the discovery of new works, since the subtlety of nature is greater many times over than the subtlety of argument. But axioms duly and orderly formed from particulars easily discover the way to new particulars, and thus render sciences active.

From Novum Organum (1620), Book 1, Aphorism 24. Translated as The New Organon: Aphorisms Concerning the Interpretation of Nature and the Kingdom of Man), collected in James Spedding, Robert Ellis and Douglas Heath (eds.), The Works of Francis Bacon (1857), Vol. 4, 51.

It pays to be obvious, especially if you have a reputation for subtlety.

Science is not only compatible with spirituality; it is a profound source of spirituality. When we recognize our place in an immensity of light-years and in the passage of ages, when we grasp the intricacy, beauty, and subtlety of life, then that soaring feeling, that sense of elation and humility combined, is surely spiritual ... The notion that science and spirituality are somehow mutually exclusive does a disservice to both.

Subtlety is not a proof of wisdom. Fools and even madmen are at times extraordinarily subtle. One can add that subtlety rarely combines with genius, which is usually ingenuous, or with greatness of character, which is always frank.

The authors of literary works may not have intended all the subtleties, complexities, undertones, and overtones that are attributed to them by critics and by students writing doctoral theses.ŌĆØ ThatŌĆÖs what God says about geologists, I told him...

In Book Review 'Pulling the Strings,' of Lawrence Krauss's Hiding in the Mirror: The Mysterious Lure of Extra Dimensions, from Plato to String Theory and Beyond in Nature (22 Dec 2005), 438, 1082.

The real problem in speech is not precise language. The problem is clear language. The desire is to have the idea clearly communicated to the other person. [But] precise language is not precise in any sense if you deal with the real objects of the world, and is overly pedantic and quite confusing to use it unless there are some special subtleties which have to be carefully distinguished.

Criticizing ŌĆ£overly pedanticŌĆØ language in proposed textbooks for a modified arithmetic course for grades 1-8 in California schools. In article, 'New Textbooks for the ŌĆśNewŌĆÖ Mathematics', Engineering and Science (Mar 1965), 28, No. 6. Collected in Perfectly Reasonable Deviations from the Beaten Track: The Letters of Richard Feynman (2008), 454. He was writing as a member of the California State Curriculum Committee

There are many things akin to highest deity that are still obscure. Some may be too subtle for our powers of comprehension, others imperceptible to us because such exalted majesty conceals itself in the holiest part of its sanctuary, forbidding access to any power save that of the spirit. How many heavenly bodies revolve unseen by human eye!

We pass with admiration along the great series of mathematicians, by whom the science of theoretical mechanics has been cultivated, from the time of Newton to our own. There is no group of men of science whose fame is higher or brighter. The great discoveries of Copernicus, Galileo, Newton, had fixed all eyes on those portions of human knowledge on which their successors employed their labors. The certainty belonging to this line of speculation seemed to elevate mathematicians above the students of other subjects; and the beauty of mathematical relations and the subtlety of intellect which may be shown in dealing with them, were fitted to win unbounded applause. The successors of Newton and the Bernoullis, as Euler, Clairaut, DŌĆÖAlembert, Lagrange, Laplace, not to introduce living names, have been some of the most remarkable men of talent which the world has seen.

[About the great synthesis of atomic physics in the 1920s:] It was a heroic time. It was not the doing of any one man; it involved the collaboration of scores of scientists from many different lands. But from the first to last the deeply creative, subtle and critical spirit of Niels Bohr guided, restrained, deepened and finally transmuted the enterprise.