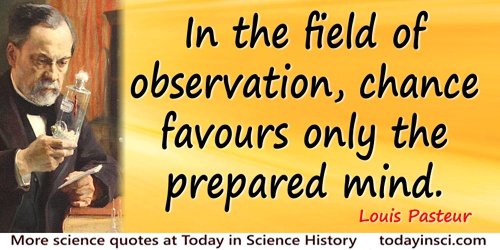 Inaugural Address as newly appointed Professor and Dean (Sep 1854) at the opening of the new Faculté des Sciences at Lille (7 Dec 1854). In René Vallery-Radot, The Life of Pasteur, translated by Mrs. R. L. Devonshire (1919), 76.

[Elementary student, laying a cocoon on the teacher's desk:] That is serendipity. The caterpillar thinks it is dying but it is really being born.

[When recording electrical impulses from a frog nerve-muscle preparation seemed to show a tiresomely oscillating electrical artefactbut only when the muscle was hanging unsupported.] The explanation suddenly dawned on me ... a muscle hanging under its own weight ought, if you come to think of it, to be sending sensory impulses up the nerves coming from the muscle spindles ... That particular days work, I think, had all the elements that one could wish for. The new apparatus seemed to be misbehaving very badly indeed, and I suddenly found it was behaving so well that it was opening up an entire new range of data ... it didnt involve any particular hard work, or any particular intelligence on my part. It was just one of those things which sometimes happens in a laboratory if you stick apparatus together and see what results you get.

Although I must say that research problems I worked on were frequently the result of serendipity and often grew out of my interest in some species or some environment which I found to be particularly appealingmarine birds and tropical islands for example.

Applied research generates improvements, not breakthroughs. Great scientific advances spring from pure research. Even scientists renowned for their useful applied discoveries often achieved success only when they abandoned their ostensible applied-science goal and allowed their minds to soaras when Alexander Fleming, just playing about, refrained from throwing away green molds that had ruined his experiment, studied them, and discovered penicillin. Or when C. A. Clarke, a physician affiliated with the University of Liverpool, became intrigued in the 1950s by genetically created color patterns that emerged when he cross-bred butterflies as a hobby. His fascination led himby the pleasant route of pursuing idle curiosityto the successful idea for preventing the sometimes fatal anemia that threatened babies born of a positive-Rhesus-factor father and a negative-Rhesus-factor mother.

In Jacques Cousteau and Susan Schiefelbein, The Human, the Orchid, and the Octopus: Exploring and Conserving Our Natural World (2007), 214-215.

Chance throws peculiar conditions in everyone's way. If we apply intelligence, patience and special vision, we are rewarded with new creative breakthroughs.

Told to his Harvard students. As quoted, without citation, by Marcus Bach, 'Serendiptiy in the Business World', in The Rotarian (Oct 1981), 139, No. 4, 40. If you know a primary source, please contact Webmaster.

How did I discover saccharin? Well, it was partly by accident and partly by study. I had worked a long time on the compound radicals and substitution products of coal tar... One evening I was so interested in my laboratory that I forgot about my supper till quite late, and then rushed off for a meal without stopping to wash my hands. I sat down, broke a piece of bread, and put it to my lips. It tasted unspeakably sweet. I did not ask why it was so, probably because I thought it was some cake or sweetmeat. I rinsed my mouth with water, and dried my moustache with my napkin, when, to my surprise the napkin tasted sweeter than the bread. Then I was puzzled. I again raised my goblet, and, as fortune would have it, applied my mouth where my fingers had touched it before. The water seemed syrup. It flashed on me that I was the cause of the singular universal sweetness, and I accordingly tasted the end of my thumb, and found it surpassed any confectionery I had ever eaten. I saw the whole thing at once. I had discovered some coal tar substance which out-sugared sugar. I dropped my dinner, and ran back to the laboratory. There, in my excitement, I tasted the contents of every beaker and evaporating dish on the table.

Many of the things that have happened in the laboratory have happened in ways it would have been impossible to foresee, but not impossible to plan for in a sense. I do not think Dr. Whitney deliberately plans his serendipity but he is built that way; he has the artan instinctive way of preparing himself by his curiosity and by his interest in people and in all kinds of things and in nature, so that the things he learns react on one another and thereby accomplish things that would be impossible to foresee and plan.

Remember the Three Princes of Serendip who went out looking for treasure? They didn't find what they were looking for, but they kept finding things just as valuable. That's serendipity, and our business [drugs] is full of it.

The chances for favorable serendipity are increased if one studies an animal that is not one of the common laboratory species. Atypical animals, or preparations, force one to use non-standard approaches and non-standard techniques, and even to think nonstandard ideas. My own preference is to seek out species which show some extreme of adaptation. Such organisms often force one to abandon standard methods and standard points of view. Almost inevitably they lead one to ask new questions, and most importantly in trying to comprehend their special and often unusual adaptations one often serendipitously stumbles upon new insights.

The progress of science depends less than is usually believed on the efforts and performance of the individual genius ... many important discoveries have been made by men of ordinary talents, simply because chance had made them, at the proper time and in the proper place and circumstances, recipients of a body of doctrines, facts and techniques that rendered almost inevitable the recognition of an important phenomenon. It is surprising that some historian has not taken malicious pleasure in writing an anthology of 'one discovery' scientists. Many exciting facts have been discovered as a result of loose thinking and unimaginative experimentation, and described in wrappings of empty words. One great discovery does not betoken a great scientist; science now and then selects insignificant standard bearers to display its banners.

The seeds of great discoveries are constantly floating around us, but they only take root in minds well-prepared to receive them.

From presidential address (24 Nov 1877) to the Philosophical Society of Washington. As cited by L.A. Bauer in his retiring president address (5 Dec 1908), 'The Instruments and Methods of Research', published in Philosophical Society of Washington Bulletin, 15, 103. Reprinted in William Crookes (ed.) The Chemical News and Journal of Industrial Science (30 Jul 1909), 59.

There may be instances of mere accidental discovery; but, setting these aside, the great advances made in the inductive sciences are, for the most part, preceded by a more or less probable hypothesis. The imagination, having some small light to guide it, goes first. Further observation, experiment, and reason follow.

This discovery, indeed, is almost of that kind which I call serendipity, a very expressive word, which as I have nothing better to tell you, I shall endeavour to explain to you: you will understand it better by the derivation than by the definition. I once read a silly fairy tale, called The Three Princes of Serendip: as their highnesses travelled, they were always making discoveries, by accidents and sagacity, of things which they were not in quest of: for instance, one of them discovered that a mule blind of the right eye had travelled the same road lately, because the grass was eaten only on the left side, where it was worse than on the rightnow do you understand serendipity?

[In the case of research director, Willis R. Whitney, whose style was to give talented investigators as much freedom as possible, you may define serendipity as] the art of profiting from unexpected occurrences. When you do things in that way you get unexpected results. Then you do something else and you get unexpected results in another line, and you do that on a third line and then all of a sudden you see that one of these lines has something to do with the other. Then you make a discovery that you never could have made by going on a direct road.