As for France and England, with all their pre-eminence in science, the one is a den of robbers, and the other of pirates. If science produces no better fruits than tyranny, murder, rapine, and destitution of national morality, I would rather wish our country to be ignorant, honest, and estimable as our neighboring savages are.

Few intellectual tyrannies can be more recalcitrant than the truths that everybody knows and nearly no one can defend with any decent data (for who needs proof of anything so obvious). And few intellectual activities can be more salutary than attempts to find out whether these rocks of ages might crumble at the slightest tap of an informational hammer.

I belonged to a small minority of boys who were lacking in physical strength and athletic prowess. ... We found our refuge in science. ... We learned that science is a revenge of victims against oppressors, that science is a territory of freedom and friendship in the midst of tyranny and hatred.
[Referring to the science club he founded to escape bullying at his preparatory school.]

It is excellent
To have a giant's strength, but it is tyrannous
To use it like a giant. 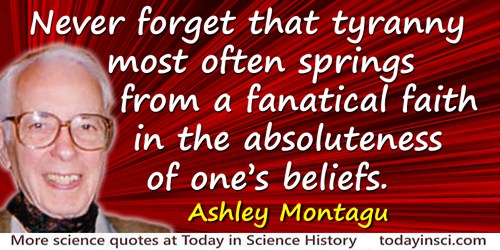 Never forget that tyranny most often springs from a fanatical faith in the absoluteness of ones beliefs.

Philosophy, though unable to tell us with certainty what is the true answer to the doubts which it raises, is able to suggest many possibilities which enlarge our thoughts and free them from the tyranny of custom.

Politics is a pendulum whose swings between anarchy and tyranny are fueled by perennially rejuvenated illusions.

Some of the worst tyrannies of our day genuinely are vowed to the service of mankind, yet can function only by pitting neighbor against neighbor. The all-seeing eye of a totalitarian regime is usually the watchful eye of the next-door neighbor. In a Communist state love of neighbor may be classed as counter-revolutionary.

The Arts & Sciences are the Destruction of Tyrannies or Bad Governments. Why should a good government endeavour to depress what is its chief and only support.

The longest tyranny that ever swayd
Was that wherein our ancestors betrayd
Their free-born reason to the Stagirite [Aristotle],
And made his torch their universal light.
So truth, while only one suppli'd the state,
Grew scarce, and dear, and yet sophisticate.

There it was that I found and visited the famous Galileo, grown old, a prisner to the inquisition, for thinking in astronomy otherwise than the Franciscan and Dominican licencers thought.
Recounting the tyranny of the inquisition that Milton had seen for himself in Italy. When he visited in 1640, he was age 30, and Galileo was age 77 and nearly blind.

'Proof.The servile condition of learning in Italy, the home of licencing.' Areopagitica; A Speech of Mr John Milton to the Parlament of England (24 Nov 1644), editted by Edward Arber (1868), 60.

These Disciplines [mathematics] serve to inure and corroborate the Mind to a constant Diligence in Study; to undergo the Trouble of an attentive Meditation, and cheerfully contend with such Difficulties as lie in the Way. They wholly deliver us from a credulous Simplicity, most strongly fortify us against the Vanity of Scepticism, effectually restrain from a rash Presumption, most easily incline us to a due Assent, perfectly subject us to the Government of right Reason, and inspire us with Resolution to wrestle against the unjust Tyranny of false Prejudices. If the Fancy be unstable and fluctuating, it is to be poized by this Ballast, and steadied by this Anchor, if the Wit be blunt it is sharpened upon this Whetstone; if luxuriant it is pared by this Knife; if headstrong it is restrained by this Bridle; and if dull it is rouzed by this Spur. The Steps are guided by no Lamp more clearly through the dark Mazes of Nature, by no Thread more surely through the intricate Labyrinths of Philosophy, nor lastly is the Bottom of Truth sounded more happily by any other Line. I will not mention how plentiful a Stock of Knowledge the Mind is furnished from these, with what wholesome Food it is nourished, and what sincere Pleasure it enjoys. But if I speak farther, I shall neither be the only Person, nor the first, who affirms it; that while the Mind is abstracted and elevated from sensible Matter, distinctly views pure Forms, conceives the Beauty of Ideas, and investigates the Harmony of Proportions; the Manners themselves are sensibly corrected and improved, the Affections composed and rectified, the Fancy calmed and settled, and the Understanding raised and excited to more divine Contemplations. All which I might defend by Authority, and confirm by the Suffrages of the greatest Philosophers.

Though he may not always recognise his bondage, modern man lives under a tyranny of numbers.

The Tyranny of Numbers; Mismeasurement and Misrule (1995), 1.