How many times did the sun shine, how many times did the wind howl over the desolate tundras, over the bleak immensity of the Siberian taigas, over the brown deserts where the Earths salt shines, over the high peaks capped with silver, over the shivering jungles, over the undulating forests of the tropics! Day after day, through infinite time, the scenery has changed in imperceptible features. Let us smile at the illusion of eternity that appears in these things, and while so many temporary aspects fade away, let us listen to the ancient hymn, the spectacular song of the seas, that has saluted so many chains rising to the light.

I built the solenoid and with great expectations late one evening I pressed the switch which sent a current of 40 amperes through the coil. The result was spectaculara deafening explosion, the apparatus disappeared, all windows were blown in or out, a wall caved in, and thus ended my pioneering experiment on liquid hydrogen cooled coils! [Recalling the result of his experiment, on 31 Mar 1930, to maximize the magnetic field by cooling the coils of an electromagnet in liquid hydrogen to reduce their resistance.]

I would much prefer to have Goddard interested in real scientific development than to have him primarily interested in more spectacular achievements [Goddards rocket research] of less real value.

Let us sum up the three possible explanations of the decision to drop the bomb and its timing. The first that it was a clever and highly successful move in the field of power politics, is almost certainly correct; the second, that the timing was coincidental, convicts the American government of a hardly credible tactlessness [towards the Soviet Union]; and the third, the Roman holiday theory [a spectacular event to justify the cost of the Manhattan Project], convicts them of an equally incredible irresponsibility.

In The Political and Military Consequences of Atomic Energy (1948), 126. As cited by Maurice W. Kirby and Jonathan Rosenhead, 'Patrick Blackett (1897)' in Arjang A. Assad (ed.) and Saul I. Gass (ed.),Profiles in Operations Research: Pioneers and Innovators (2011), 17. Blackett regarded the dropping of the atomic bombs on Japan as unnecessary because a Japanese surrender was inevitable.

Like the furtive collectors of stolen art, we [cell biologists] are forced to be lonely admirers of spectacular architecture, exquisite symmetry, dramas of violence and death, mobility, self-sacrifice and, yes, rococo sex.

Post-operatively the transplanted kidney functioned immediately with a dramatic improvement in the patients renal and cardiopulmonary status. This spectacular success was a clear demonstration that organ transplantation could be life-saving. In a way, it was spying into the future because we had achieved our long-term goal by bypassing, but not solving, the issue of biological incompatibility.

Referring to the pioneering first kidney transplant. It was well-matched since it was between twins. In Nobel Lecture (8 Dec 1990). Printed in Tore Frängsmyr and Jan Lindsten (eds.), Nobel Lectures, Physiology or Medicine 1981-1990 (1993).

The advances of biology during the past 20 years have been breathtaking, particularly in cracking the mystery of heredity. Nevertheless, the greatest and most difficult problems still lie ahead. The discoveries of the 1970s about the chemical roots of memory in nerve cells or the basis of learning, about the complex behavior of man and animals, the nature of growth, development, disease and aging will be at least as fundamental and spectacular as those of the recent past.

The discovery in 1846 of the planet Neptune was a dramatic and spectacular achievement of mathematical astronomy. The very existence of this new member of the solar system, and its exact location, were demonstrated with pencil and paper; there was left to observers only the routine task of pointing their telescopes at the spot the mathematicians had marked.

The essence of engineering consists not so much in the mere construction of the spectacular layouts or developments, but in the invention requiredthe analysis of the problem, the design, the solution by the mind which directs it all.

The faith of scientists in the power and truth of mathematics is so implicit that their work has gradually become less and less observation, and more and more calculation. The promiscuous collection and tabulation of data have given way to a process of assigning possible meanings, merely supposed real entities, to mathematical terms, working out the logical results, and then staging certain crucial experiments to check the hypothesis against the actual empirical results. But the facts which are accepted by virtue of these tests are not actually observed at all. With the advance of mathematical technique in physics, the tangible results of experiment have become less and less spectacular; on the other hand, their significance has grown in inverse proportion. The men in the laboratory have departed so far from the old forms of experimentationtypified by Galileo's weights and Franklin's kitethat they cannot be said to observe the actual objects of their curiosity at all; instead, they are watching index needles, revolving drums, and sensitive plates. No psychology of 'association' of sense-experiences can relate these data to the objects they signify, for in most cases the objects have never been experienced. Observation has become almost entirely indirect; and readings take the place of genuine witness. 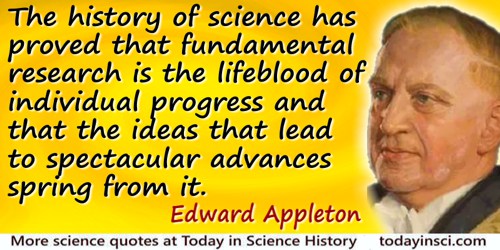 The history of science has proved that fundamental research is the lifeblood of individual progress and that the ideas that lead to spectacular advances spring from it.

In J. Edwin Holmström, Records and Research in Engineering and Industrial Science (1956), 7.

The living world is a unique and spectacular marvel. Billions of individuals, and millions of kinds of plants and animals . Working together to benefit from the energy of the sun and the minerals of the earth. Leading lives that interlock in such a way that they sustain each other. We rely entirely on this finely tuned life-support machine. And it relies on its biodiversity to run smoothly. Yet the way we humans live on Earth now is sending biodiversity into a decline.

From introductory narration to Netflix TV program, A Life on Our Planet: My Witness Statement and a Vision for the Future (4 Oct 2020).

The spectacular thing about Johnny [von Neumann] was not his power as a mathematician, which was great, or his insight and his clarity, but his rapidity; he was very, very fast. And like the modern computer, which no longer bothers to retrieve the logarithm of 11 from its memory (but, instead, computes the logarithm of 11 each time it is needed), Johnny didnt bother to remember things. He computed them. You asked him a question, and if he didnt know the answer, he thought for three seconds and would produce and answer.

The view of the moon that weve been having recently is really spectacular. It fills about three-quarters of the hatch window, and of course we can see the entire circumference even though part of it is in complete shadow and part of it is in earthshine. Its a view worth the price of the trip.

We are a spectacular, splendid manifestation of life. We have language We have affection. We have genes for usefulness, and usefulness is about as close to a common goal for all of nature as I can guess at.