Dogbert: Scientists have discovered the gene that makes some people love golf.
Dilbert: How can they tell itŌĆÖs the golf gene?
Dogbert: ItŌĆÖs plaid and it lies.

A persistent and age-old instinct makes us want to wander
Into regions yet untrod
And read what is still unread
In the manuscripts of God.

Address upon receiving the Perkin Medal Award, 'The Big Things in Chemistry', The Journal of Industrial and Engineering Chemistry (Feb 1921), 13, No. 2, 163. These lines concluded his remarks, without citation, and since Webmaster has found no other source has assumed the words are his own. Contact Webmaster if you know a different primary source.

An evolution is a series of events that in itself as series is purely physical, ŌĆö a set of necessary occurrences in the world of space and time. An egg develops into a chick; ŌĆ” a planet condenses from the fluid state, and develops the life that for millions of years makes it so wondrous a place. Look upon all these things descriptively, and you shall see nothing but matter moving instant after instant, each instant containing in its full description the necessity of passing over into the next. ŌĆ” But look at the whole appreciatively, historically, synthetically, as a musician listens to a symphony, as a spectator watches a drama. Now you shall seem to have seen, in phenomenal form, a story.

Stated without naming the source as ŌĆ£A great writer has said,ŌĆØ by Daniel Bedinger Lucas in Nicaragua: War of the Filibusters (1896), 151. Please contact Webmaster if you can cite the writer.

I was a kind of a one-man army. I could solder circuits together, I could turn out things on the lathe, I could work with rockets and balloons. IŌĆÖm a kind of a hybrid between an engineer and a physicist and astronomer.

Characterizing the self-reliance of scientists of his day, contrasted to the complexities of scientific undertakings today, when ŌĆ£the pattern is much more a team of peopleŌĆØ who are ŌĆ£backed up by a technical staff that does most of these things.ŌĆØ In interview, Rushworth M. Kidder, 'Grounded in Space Science', Christian Science Monitor (22 Dec 1989).

If you ask me whether science has solved, or is likely to solve, the problem of this universe, I must shake my head in doubt. We have been talking of matter and force; but whence came matter, and whence came force? You remember the first NapoleonŌĆÖs question, when the savans who accompanied him to Egypt discussed in his presence the problem of the universe, and solved it to their apparent satisfaction. He looked aloft to the starry heavens, and saidŌĆöŌĆ£It is all very well, gentlemen, but who made all these!ŌĆØ That question still remains unanswered, and science makes no attempt to answer it.

Lecture 'On Matter and Force', to nearly 3,000 working men, at the Dundee Meeting of the British Association for the Advancement of Science (Sep 1867), reported in 'Dundee Meeting, 1867', Chemical News and Journal of Physical Science (Nov 1867)

As quoted, without citation, in Richard D Pepperman, The Eye is Quicker (2004), xv.

Never promote a man who hasnŌĆÖt made some bad mistakes, because you would be promoting someone who hasnŌĆÖt done much.

As quoted, without citation, in Ken Fisher and Aaron Anderson (ed.), 'The Other Dow Theory: January 4, 1993', The Making of a Market Guru: Forbes Presents 25 Years of Ken Fisher (2010), 187. The author, Ken Fisher, writes that when young and caught doing something wrong, his father ŌĆ£would quote Dow to me and then insist on analyzing what I had done wrong in the interest of learning from it.ŌĆØ 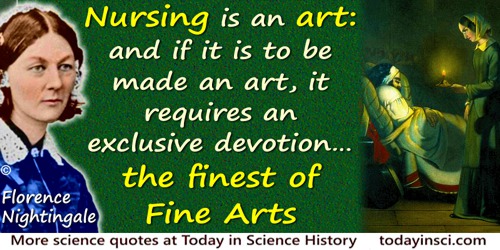 Nursing is an art: and if it is to be made an art, it requires an exclusive devotion as hard a preparation as any painterŌĆÖs or sculptorŌĆÖs work; for what is the having to do with dead canvas or dead marble, compared with having to do with the living body, the temple of GodŌĆÖs spirit? It is one of the Fine Arts: I had almost said, the finest of Fine Arts.

Obviously everyone wants to be successful, but I want to be looked back on as being very innovative, very trusted and ethical and ultimately making a big difference in the world.

One can claim that chemical engineering was practiced even by the ancient Greeks and Romans when they were making soap or wine, or treating ores in Lavrion or Sicily.

Perhaps the problem is the seeming need that people have of making black-and-white cutoffs when it comes to certain mysterious phenomena, such as life and consciousness. People seem to want there to be an absolute threshold between the living and the nonliving, and between the thinking and the ŌĆ£merely mechanical,ŌĆØ ... But the onward march of science seems to force us ever more clearly into accepting intermediate levels of such properties.

ŌĆśShades of Gray Along the Consciousness ContinuumŌĆÖ, Fluid Concepts & Creative Analogies: Computer Models of the Fundamental Mechanisms of Thought (1995), 310.

From Sermon, collected in The Pattern in the Mount and Other Sermons (1885), 6.

Realistic thinking accrues only after mistake making, which is the cosmic wisdom's most cogent way of teaching each of us how to carry on.

Rules are made for people who arenŌĆÖt willing to make up their own.

Science is beautiful when it makes simple explanations of phenomena or connections between different observations. Examples include the double helix in biology, and the fundamental equations of physics.
[Answer to question: What are the things you find most beautiful in science?]

The Patent-Office Commissioner knows that all machines in use have been invented and re-invented over and over; that the marinerŌĆÖs compass, the boat, the pendulum, glass, movable types, the kaleidoscope, the railway, the power-loom, etc., have been many times found and lost, from Egypt, China and Pompeii down; and if we have arts which Rome wanted, so also Rome had arts which we have lost; that the invention of yesterday of making wood indestructible by means of vapor of coal-oil or paraffine was suggested by the Egyptian method which has preserved its mummy-cases four thousand years.

The philosophy that I have worked under most of my life is that the serious study of natural history is an activity which has far-reaching effects in every aspect of a personŌĆÖs life. It ultimately makes people protective of the environment in a very committed way. It is my opinion that the study of natural history should be the primary avenue for creating environmentalists.

They look a little like the monster in ŌĆśAlien.ŌĆÖ TheyŌĆÖre horrifying to look at up close. ThatŌĆÖs sort of what makes them fun. [About his microscopic study of ants.]

We shall therefore say that a program has common sense if it automatically deduces for itself a sufficient wide class of immediate consequences of anything it is told and what it already knows. ... Our ultimate objective is to make programs that learn from their experience as effectively as humans do.

[It] is not the nature of things for any one man to make a sudden, violent discovery; science goes step by step and every man depends on the work of his predecessors. When you hear of a sudden unexpected discoveryŌĆöa bolt from the blueŌĆöyou can always be sure that it has grown up by the influence of one man or another, and it is the mutual influence which makes the enormous possibility of scientific advance. Scientists are not dependent on the ideas of a single man, but on the combined wisdom of thousands of men, all thinking of the same problem and each doing his little bit to add to the great structure of knowledge which is gradually being erected.

Concluding remark in Lecture ii (1936) on 'Forty Years of Physics', revised and prepared for publication by J.A. Ratcliffe, collected in Needham and Pagel (eds.), Background to Modern Science: Ten Lectures at Cambridge Arranged by the History of Science Committee, (1938), 73-74. Note that the words as prepared for publication may not be verbatim as spoken in the original lecture by the then late Lord Rutherford.