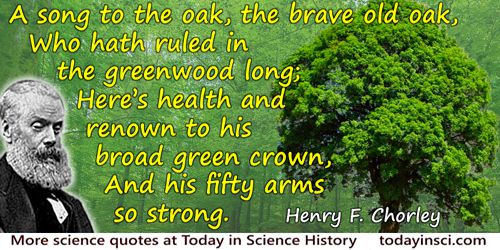 Blow, winds, and crack your cheeks! Rage, blow,
You cataracts and hurricanoes, spout
Till you have drenchd our steeples, drowned the cocks!
You sulph'rous and thought-executing fires,
Vaunt-couriers of oak-cleaving thunderbolts,
Singe my white head; and thou all-shaking thunder,
Strike flat the thick rotundity o'th' world,
Crack natures moulds, all germens spill at once
That makes ingrateful man.

Genius unexerted is no more genius than a bushel of acorns is a forest of oaks.

God bless all the precious little examples and all their cascading implications; without these gems, these tiny acorns bearing the blueprints of oak trees, essayists would be out of business.

Many a genius has been slow of growth. Oaks that flourish for a thousand years do not spring up into beauty like a reed.

No place affords a more striking conviction of the vanity of human hopes than a publick library; for who can see the wall crouded on every side by mighty volumes, the works of laborious meditation, and accurate inquiry, now scarcely known but by the catalogue, and preserved only to encrease the pomp of learning, without considering how many hours have been wasted in vain endeavours, how often imagination has anticipated the praises of futurity, how many statues have risen to the eye of vanity, how many ideal converts have elevated zeal, how often wit has exulted in the eternal infamy of his antagonists, and dogmatism has delighted in the gradual advances of his authority, the immutability of his decrees, and the perpetuity of his power.
Non unquam dedit
Documenta fors majora, quam fragili loco
Starent superbi.
Seneca, Troades, II, 4-6
Insulting chance ne'er call'd with louder voice,
On swelling mortals to be proud no more.
Of the innumerable authors whose performances are thus treasured up in magnificent obscurity, most are forgotten, because they never deserved to be remembered, and owed the honours which they have once obtained, not to judgment or to genius, to labour or to art, but to the prejudice of faction, the stratagem of intrigue, or the servility of adulation.
Nothing is more common than to find men whose works are now totally neglected, mentioned with praises by their contemporaries, as the oracles of their age, and the legislators of science. Curiosity is naturally excited, their volumes after long enquiry are found, but seldom reward the labour of the search. Every period of time has produced these bubbles of artificial fame, which are kept up a while by the breath of fashion and then break at once and are annihilated. The learned often bewail the loss of ancient writers whose characters have survived their works; but perhaps if we could now retrieve them we should find them only the Granvilles, Montagus, Stepneys, and Sheffields of their time, and wonder by what infatuation or caprice they could be raised to notice.
It cannot, however, be denied, that many have sunk into oblivion, whom it were unjust to number with this despicable class. Various kinds of literary fame seem destined to various measures of duration. Some spread into exuberance with a very speedy growth, but soon wither and decay; some rise more slowly, but last long. Parnassus has its flowers of transient fragrance as well as its oaks of towering height, and its laurels of eternal verdure.

Not one of them [formulae] can be shown to have any existence, so that the formula of one of the simplest of organic bodies is confused by the introduction of unexplained symbols for imaginary differences in the mode of combination of its elements It would be just as reasonable to describe an oak tree as composed of blocks and chips and shavings to which it may be reduced by the hatchet, as by Dr Kolbes formula to describe acetic acid as containing the products which may be obtained from it by destructive influences. A Kolbe botanist would say that half the chips are united with some of the blocks by the force parenthesis; the other half joined to this group in a different way, described by a buckle; shavings stuck on to these in a third manner, comma; and finally, a compound of shavings and blocks united together by a fourth force, juxtaposition, is joined to the main body by a fifth force, full stop.

ORGANIC LIFE beneath the shoreless waves
Was born and nurs'd in Ocean's pearly caves;
First, forms minute, unseen by spheric glass,
Move on the mud, or pierce the watery mass;
These, as successive generations bloom,
New powers acquire, and larger limbs assume;
Whence countless groups of vegetation spring,
And breathing realms of fin, and feet, and wing.
Thus the tall Oak, the giant of the wood,
Which bears Britannia's thunders on the flood;
The Whale, unmeasured monster of the main,
The lordly Lion, monarch of the plain,
The Eagle soaring in the realms of air,
Whose eye undazzled drinks the solar glare,
Imperious man, who rules the bestial crowd,
Of language, reason, and reflection proud,
With brow erect, who scorns this earthy sod,
And styles himself the image of his God;
Arose from rudiments of form and sense,
An embryon point, or microscopic ens!

The best time to plant a tree is twenty years ago. The second best time is now. 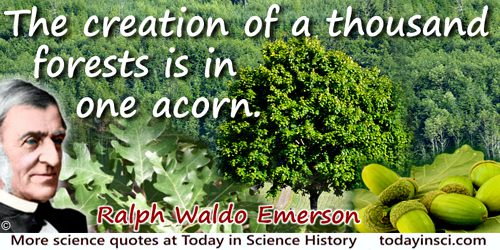 The creation of a thousand forests is in one acorn.

When you are famous it is hard to work on small problems. This is what did [Claude Elwood] Shannon in. After information theory, what do you do for an encore? The great scientists often make this error. They fail to continue to plant the little acorns from which the mighty oak trees grow. They try to get the big thing right off. And that isnt the way things go. So that is another reason why you find that when you get early recognition it seems to sterilize you.

'You and Your Research', Bell Communications Research Colloquium Seminar, 7 Mar 1986.

[My] numberless observations... made on the Strata... [have] made me confident of their uniformity throughout this Country & [have] led me to conclude that the same regularity... will be found to extend to every part of the Globe for Nature has done nothing by piecemeal. [T]here is no inconsistency in her productions. [T]he Horse never becomes an Ass nor the Crab an Apple by any intermixture or artificial combination whatever[. N]or will the Oak ever degenerate into an Ash or an Ash into an Elm. [H]owever varied by Soil or Climate the species will still be distinct on this ground. [T]hen I argue that what is found here may be found elsewhere[.] When proper allowances are made for such irregularities as often occur and the proper situation and natural agreement is well understood I am satisfied there will be no more difficulty in ascertaining the true quality of the Strata and the place of its possition [sic] than there is now in finding the true Class and Character of Plants by the Linean [sic] System.

Natural Order of the Strata in England and Wales Accurately Delineated and Described, unpublished manuscript, Department of Geology, University of Oxford, 1801, f. 7v.