A basis of physical science no more justifies dogmatism than a metaphysical basis does.

Dogmatism has only one eye, but bigotry is stone blind.

Every sentence I utter must be understood not as an affirmation but as a question.
[A caution he gives his students, to be wary of dogmatism.]

Great theories are expansive; failures mire us in dogmatism and tunnel vision.

If this critical openminded attitude  is wanted, the question at once arises, Is it science that should be studied in order to achieve it? Why not study law? A judge has to do everything that a scientist is exhorted to do in the way of withholding judgment until all the facts are in, and then judging impartially on the merits of the case as well as he can.  Why not a course in Sherlock Holmes? The detectives, or at least the detective-story writers, join with the scientists in excoriating dogmatic prejudice, lying, falsification of facts, and data, and willful fallacious reasoning.

It is the business of science to offer rational explanations for all the events in the real world, and any scientist who calls on God to explain something is falling down on his job. This applies as much to the start of the expansion as to any other event. If the explanation is not forthcoming at once, the scientist must suspend judgment: but if he is worth his salt he will always maintain that a rational explanation will eventually be found. This is the one piece of dogmatism that a scientist can allow himselfand without it science would be in danger of giving way to superstition every time that a problem defied solution for a few years.

It is true that physics gives a wonderful training in precise, logical thinking-about physics. It really does depend upon accurate reproducible experiments, and upon framing hypotheses with the greatest possible freedom from dogmatic prejudice. And if these were the really important things in life, physics would be an essential study for everybody.

No place affords a more striking conviction of the vanity of human hopes than a publick library; for who can see the wall crouded on every side by mighty volumes, the works of laborious meditation, and accurate inquiry, now scarcely known but by the catalogue, and preserved only to encrease the pomp of learning, without considering how many hours have been wasted in vain endeavours, how often imagination has anticipated the praises of futurity, how many statues have risen to the eye of vanity, how many ideal converts have elevated zeal, how often wit has exulted in the eternal infamy of his antagonists, and dogmatism has delighted in the gradual advances of his authority, the immutability of his decrees, and the perpetuity of his power.
Non unquam dedit
Documenta fors majora, quam fragili loco
Starent superbi.
Seneca, Troades, II, 4-6
Insulting chance ne'er call'd with louder voice,
On swelling mortals to be proud no more.
Of the innumerable authors whose performances are thus treasured up in magnificent obscurity, most are forgotten, because they never deserved to be remembered, and owed the honours which they have once obtained, not to judgment or to genius, to labour or to art, but to the prejudice of faction, the stratagem of intrigue, or the servility of adulation.
Nothing is more common than to find men whose works are now totally neglected, mentioned with praises by their contemporaries, as the oracles of their age, and the legislators of science. Curiosity is naturally excited, their volumes after long enquiry are found, but seldom reward the labour of the search. Every period of time has produced these bubbles of artificial fame, which are kept up a while by the breath of fashion and then break at once and are annihilated. The learned often bewail the loss of ancient writers whose characters have survived their works; but perhaps if we could now retrieve them we should find them only the Granvilles, Montagus, Stepneys, and Sheffields of their time, and wonder by what infatuation or caprice they could be raised to notice.
It cannot, however, be denied, that many have sunk into oblivion, whom it were unjust to number with this despicable class. Various kinds of literary fame seem destined to various measures of duration. Some spread into exuberance with a very speedy growth, but soon wither and decay; some rise more slowly, but last long. Parnassus has its flowers of transient fragrance as well as its oaks of towering height, and its laurels of eternal verdure.

Someday someone will write a pathology of experimental physics and bring to light all those swindles which subvert our reason, beguile our judgement and, what is worse, stand in the way of any practical progress. The phenomena must be freed once and for all from their grim torture chamber of empiricism, mechanism, and dogmatism; they must be brought before the jury of man's common sense. 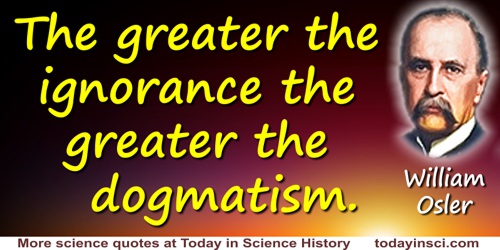 In Montréal Médical Journal (1902). Collected in Aequanimitas, with Other Addresses to Medical Students, Nurses and Practitioners of Medicine (1904), 279. Osler was referring to the ignorant dogmatism in literature from pharmaceutical houses and the hucksterism of some of their representatives.

The history of science alone can keep the physicist from the mad ambitions of dogmatism as well as the despair of pyrrhonian scepticism.

There was once an Editor of the Chemical Society, given to dogmatic expressions of opinion, who once duly said firmly that 'isomer' was wrong usage and 'isomeride' was correct, because the ending 'er' always meant a 'do-er'. 'As in water?' snapped Sidgwick.

While the dogmatist is harmful, the sceptic is useless ; one is certain of knowing, the other of not knowing. What philosophy should dissipate is certainty, whether of knowledge or of ignorance. Knowledge is not so precise a concept as is commonly thought. Instead of saying I know this, we ought to say I more or less know something more or less like this.  Knowledge in practical affairs has not the certainty or the precision of arithmetic.

Who sees the future? Let us have free scope for all directions of research; away with dogmatism, either atomistic or anti-atomistic!

Normal science, in Kuhns sense, exists. It is the activity of the non-revolutionary, or more precisely, the not-too-critical professional: of the science student who accepts the ruling dogma of the day in my view the 'normal' scientist, as Kuhn describes him, is a person one ought to be sorry for He has been taught in a dogmatic spirit: he is a victim of indoctrination I can only say that I see a very great danger in it and in the possibility of its becoming normal a danger to science and, indeed, to our civilization. And this shows why I regard Kuhns emphasis on the existence of this kind of science as so important.