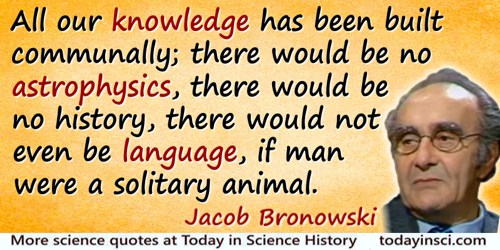 All our knowledge has been built communally; there would be no astrophysics, there would be no history, there would not even be language, if man were a solitary animal. What follows? It follows that we must be able to rely on other people; we must be able to trust their word. That is, it follows that there is a principle, which binds society together because without it the individual would be helpless to tell the truth from the false. This principle is truthfulness.

Any artist or novelist would understandsome of us do not produce their best when directed. We expect the artist, the novelist and the composer to lead solitary lives, often working at home. While a few of these creative individuals exist in institutions or universities, the idea of a majority of established novelists or painters working at the National Institute for Painting and Fine Art or a university Department of Creative Composition seems mildly amusing. By contrast, alarm greets the idea of a creative scientist working at home. A lone scientist is as unusual as a solitary termite and regarded as irresponsible or worse.

Charles Darwin [is my personal favorite Fellow of the Royal Society]. I suppose as a physical scientist I ought to have chosen Newton. He would have won hands down in an IQ test, but if you ask who was the most attractive personality then Darwin is the one you'd wish to meet. Newton was solitary and reclusive, even vain and vindictive in his later years when he was president of the society.

I have a boundless admiration for the solitary genius which enabled [Hermann Oberth] to bring into focus all of the essential elements of a gigantic concept, together with the human greatness which allowed him, in shy reserve, to bear with equanimity the crucify hims as well as the hosannas of public opinion. I myself owe him a debt of gratitude not only for being the guiding light of my life, but also for my first contact with the theoretical and practical aspects of rocket technology and space travel.

If man were by nature a solitary animal, the passions of the soul by which he was conformed to things so as to have knowledge of them would be sufficient for him; but since he is by nature a political and social animal it was necessary that his conceptions be made known to others. This he does through vocal sound. Therefore there had to be significant vocal sounds in order that men might live together. Whence those who speak different languages find it difficult to live together in social unity.

If the Easter pilgrims in Piazza San Pietro were to represent the carriers in a metal, then an insulator would resemble the Antarctic with one solitary traveller. In the abundance of carriers there is an enormous gap between conductors and insulators.

In her starry shade
Of dim and solitary loveliness,
I learn the language of another world.

It is therefore easy to see why the churches have always fought science and persecuted its devotees. On the other hand, I maintain that the cosmic religious feeling is the strongest and noblest motive for scientific research. Only those who realize the immense efforts and, above all, the devotion without which pioneer work in theoretical science cannot be achieved are able to grasp the strength of the emotion out of which alone such work, remote as it is from the immediate realities of life, can issue. What a deep conviction of the rationality of the universe and what a yearning to understand, were it but a feeble reflection of the mind revealed in this world, Kepler and Newton must have had to enable them to spend years of solitary labor in disentangling the principles of celestial mechanics! Those whose acquaintance with scientific research is derived chiefly from its practical results easily develop a completely false notion of the mentality of the men who, surrounded by a skeptical world, have shown the way to kindred spirits scattered wide through the world and through the centuries. Only one who has devoted his life to similar ends can have a vivid realization of what has inspired these men and given them the strength to remain true to their purpose in spite of countless failures. It is cosmic religious feeling that gives a man such strength. A contemporary has said, not unjustly, that in this materialistic age of ours the serious scientific workers are the only profoundly religious people.

Life was born and propagates itself on the earth as a solitary pulsation.

Most people regard scientists as explorers  Imagine a handful of people shipwrecked on a strange island and setting out to explore it. One of them cuts a solitary path through the jungle, going on and on until he is exhausted or lost or both. He eventually returns to his companions, and they listen to him with goggling eyes as he describes what he saw; what he fell into, and what bit him. After a rest he demands more supplies and sets off again to explore the unknown. Many of his companions will be doing the same, each choosing his own direction and pursuing his pioneering path.

Secret, and self-contained, and solitary as an oyster.

The essence of modernity is that progress no longer waits on genius; instead we have learned to put our faith in the organized efforts of ordinary men. Science is as old as the race, but the effective organization of science is new. Ancient science, like placer mining, was a pursuit of solitary prospectors. Nuggets of truth were found, but the total wealth of knowledge increased slowly. Modern man began to transform this world when he began to mine the hidden veins of knowledge systematically.