A man who has once looked with the archaeological eye will never see quite normally. He will be wounded by what other men call trifles. It is possible to refine the sense of time until an old shoe in the bunch grass or a pile of nineteenth century beer bottles in an abandoned mining town tolls in ones head like a hall clock.

Almost daily we shudder as prophets of doom announce the impending end of civilization and universe. We are being asphyxiated, they say, by the smoke of the industry; we are suffocating in the ever growing mountain of rubbish. Every new project depicts its measureable effects and is denounced by protesters screaming about catastrophe, the upsetting of the land, the assault on nature. If we accepted this new mythology we would have to stop pushing roads through the forest, harnessing rivers to produce the electricity, breaking grounds to extract metals, enriching the soil with chemicals, killing insects, combating viruses  But progressbasically, an effort to organise a corner of land and make it more favourable for human lifecannot be baited. Without the science of pomiculture, for example, trees will bear fruits that are small, bitter, hard, indigestible, and sour. Progress is desirable.

And so many think incorrectly that everything was created by the Creator in the beginning as it is seen, that not only the mountains, valleys, and waters, but also various types of minerals occurred together with the rest of the world, and therefore it is said that it is unnecessary to investigate the reasons why they differ in their internal properties and their locations. Such considerations are very dangerous for the growth of all the sciences, and hence for natural knowledge of the Earth, particularly the art of mining, though it is very easy for those clever people to be philosophers, having learnt by heart the three words 'God so created' and to give them in reply in place of all reasons.

For mining I cannot say much good except that its operations are generally short-lived. The extractable wealth is taken and the shafts, the tailings, and the ruins left, and in a dry country such as the American West the wounds men make in the earth do not quickly heal.

He said, Americans look upon water as an inexhaustible resource. Its not, if youre mining it. Arizona is mining groundwater.

I have known in Cornwall a work with three lifts of about 18 feet each, lift and carry a 3½-inch bore; that cost forty-two shillings a day. I dare undertake that my engine shall raise you as much water for eight-pence as will cost you a shilling to raise the like with your old engines in coal pits.

Quoted from the Miners Friend in Francis Trevithick, Life of Richard Trevithick: With an Account of His Inventions (1872), Vol. 1, 3.

It must not be thought that it is ever possible to reach the interior earth by any perseverance in mining: both because the exterior earth is too thick, in comparison with human strength; and especially because of the intermediate waters, which would gush forth with greater impetus, the deeper the place in which their veins were first opened; and which would drown all miners. 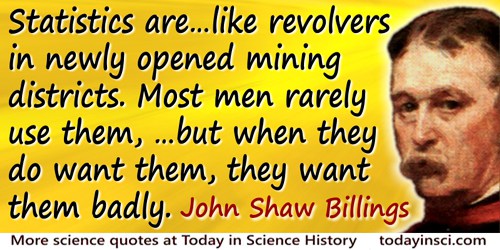 Statistics are somewhat like old medical journals, or like revolvers in newly opened mining districts. Most men rarely use them, and find it troublesome to preserve them so as to have them easy of access; but when they do want them, they want them badly.

The breaking up of the terrestrial globe, this it is we witness. It doubtless began a long time ago, and the brevity of human life enables us to contemplate it without dismay. It is not only in the great mountain ranges that the traces of this process are found. Great segments of the earth's crust have sunk hundreds, in some cases, even thousands, of feet deep, and not the slightest inequality of the surface remains to indicate the fracture; the different nature of the rocks and the discoveries made in mining alone reveal its presence. Time has levelled all.

The Chinese  use fossil teeth as one of their principal medicines. Some Chinese families have for centuries been in the business of mining fossils to supply the drug trade.

The essence of modernity is that progress no longer waits on genius; instead we have learned to put our faith in the organized efforts of ordinary men. Science is as old as the race, but the effective organization of science is new. Ancient science, like placer mining, was a pursuit of solitary prospectors. Nuggets of truth were found, but the total wealth of knowledge increased slowly. Modern man began to transform this world when he began to mine the hidden veins of knowledge systematically.

The feudal model of agriculture collided, first, with environmental limits and then with a massive external shock  the Black Death. After that, there was a demographic shock: too few workers for the land, which raised their wages and made the old feudal obligation system impossible to enforce. The labour shortage also forced technological innovation. The new technologies that underpinned the rise of merchant capitalism were the ones that stimulated commerce (printing and accountancy), the creation of tradeable wealth (mining, the compass and fast ships) and productivity (mathematics and the scientific method).

The mortality of those who dig minerals is very great, and women who marry men of this sort marry again and again. According to Agricola, at the mines in the Carpathian mountains, women have been known to marry seven times.

The personal adventures of a geologist would form an amusing narrative. He is trudging along, dusty and weather­beaten, with his wallet at his back, and his hammer on his shoulder, and he is taken for a stone-mason travelling in search of work. In mining-countries, he is supposed to be in quest of mines, and receives many tempting offers of shares in the Wheel Dream, or the Golden Venture;he has been watched as a smuggler; it is well if he has not been committed as a vagrant, or apprehended as a spy, for he has been refused admittance to an inn, or has been ushered into the room appropriated to ostlers and postilions. When his fame has spread among the more enlightened part of the community of a district which he has been exploring, and inquiries are made of the peasantry as to the habits and pursuits of the great philosopher who has been among them, and with whom they have become familiar, it is found that the importance attached by him to shells and stones, and such like trumpery, is looked upon as a species of derangement, but they speak with delight of his affability, sprightliness, and good-humour. They respect the strength of his arm, and the weight of his hammer, as they point to marks which he inflicted on the rocks, and they recount with wonder his pedestrian performances, and the voracious appetite with which, at the close of a long days work he would devour the coarsest food that was set before him.

In Practical Geology and Mineralogy: With Instructions for the Qualitative Analysis of Minerals (1841), 31-2.

This is the patent-age of new inventions
For killing bodies, and for saving souls,
All propagated with the best intentions;
Sir Humphrey Davy's lantern, by which coals
Are safely mined for in the mode he mentions,
Tombuctoo travels, voyages to the Poles,
Are ways to benefit mankind, as true,
Perhaps, as shooting them at Waterloo.

Throughout history, engineers have served their neighbours, their towns and their countries by making tools, machines and countless other things that improve every aspect of life. From information technology to medical science and mining, from building roads to space travel, engineers are working to make a difference to our standard of living, and with it our health, wealth and happiness. At its heart, engineering is about using science to find creative, practical solutions. It is a noble profession.

[The effect of deep-sea mining is] to essentially clear-cut the deep ocean.