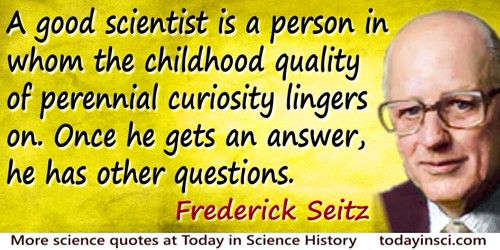 A good scientist is a person in whom the childhood quality of perennial curiosity lingers on. Once he gets an answer, he has other questions.

Widely circulated without citation, for example, in Ashton Applewhite, William R. Evans III and Andrew Frothingham, And I Quote (1991), 471. If you know the primary source, please contact Webmaster.

All over the world there lingers on the memory of a giant tree, the primal tree, rising up from the centre of the Earth to the heavens and ordering the universe around it. It united the three worlds: its roots plunged down into subterranean abysses, Its loftiest branches touched the empyrean. Thanks to the Tree, it became possible to breathe the air; to all the creatures that then appeared on Earth it dispensed its fruit, ripened by the sun and nourished by the water which it drew from the soil. From the sky it attracted the lightning from which man made fire and, beckoning skyward, where clouds gathered around its fall. The Tree was the source of all life, and of all regeneration. Small wonder then that tree-worship was so prevalent in ancient times.

As we descend deeper and deeper into this region, the inhabitants become more and more modified, and fewer and fewer, indicating our approach to an abyss where life is either extinguished, or exhibits but a few sparks to mark its lingering presence.

Go on, fair Science; soon to thee
Shall Nature yield her idle boast;
Her vulgar lingers formed a tree,
But thou hast trained it to a post.

Mankind have been slow to believe that order reigns in the universethat the world is a cosmos and a chaos.
The divinities of heathen superstition still linger in one form or another in the faith of the ignorant, and even intelligent men shrink from the contemplation of one supreme will acting regularly, not fortuitously, through laws beautiful and simple rather than through a fitful and capricious system of intervention.
... The scientific spirit has cast out the demons, and presented us with nature clothed in her right mind and living under the reign of law. It has given us, for the sorceries of the alchemist, the beautiful laws of chemistry; for the dreams of the astrologer, the sublime truths of astronomy; for the wild visions of cosmogony, the monumental records of geology; for the anarchy of diabolism, the laws of God.

Speech (16 Dec 1867) given while a member of the U.S. House of Representatives, introducing resolution for the appointment of a committee to examine the necessities for legislation upon the subject of the ninth census to be taken the following year. Quoted in John Clark Ridpath, The Life and Work of James A. Garfield (1881), 216.

Epistle IV, to Albius Tibullus, translated by Christopher Smart in The Works of Horace (1861), 237. Also seen translated as, To linger silently among the healthful woods, musing on such things as are worthy of a wise and good man.

Science moves, but slowly, slowly, creeping on from point to point. ...
Yet I doubt not through the ages one increasing purpose runs,
And the thoughts of men are widened with the process of the suns.
Knowledge comes, but wisdom lingers

Since Britain lies far north toward the pole, the nights are short in summer, and at midnight it is hard to tell whether the evening twilight still lingers or whether dawn is approaching, since the sun at night passes not far below the earth in its journey round the north back to the east. Consequently the days are long in summer, as are the nights in winter when the sun withdraws into African regions.

That small word “Force,” they make a barber's block,
Ready to put on
Meanings most strange and various, fit to shock
Pupils of Newton....
The phrases of last century in this
Linger to play tricks—
Vis viva and Vis Mortua and Vis Acceleratrix:—
Those long-nebbed words that to our text books still
Cling by their titles,
And from them creep, as entozoa will,
Into our vitals.
But see! Tait writes in lucid symbols clear
One small equation;
And Force becomes of Energy a mere
Space-variation.

'Report on Tait's Lecture on Force:— B.A., 1876', reproduced in Bruce Clarke, Energy Forms: Allegory and Science in the Era of Classical Thermodynamics (2001), 19. Maxwell's verse was inspired by a paper delivered at the British Association (B.A.. He was satirizing a “considerable cofusion of nomenclature” at the time, and supported his friend Tait's desire to establish a redefinition of energy on a thermnodynamic basis.

When I needed an apparatus to help me linger below the surface of the sea, Émile Gagnan and I used well-known scientific principles about compressed gases to invent the Aqualung; we applied science. The Aqualung is only a tool. The point of the Aqualungof the computer, the CAT scan, the vaccine, radar, the rocket, the bomb, and all other applied scienceis utility.

In Jacques Cousteau and Susan Schiefelbein, The Human, the Orchid, and the Octopus: Exploring and Conserving Our Natural World (2007), 181.