Nec fas est proprius mortali attingere divos.
It is not lawful for mortals to approach divinity nearer than this.

Last hexameter of the Latin verses, 'In viri praestantissimi isaaci newtoni opus hocce mathematico-physicum saeculi gentisque nostrae decus egregium' by which Edmond Halley expressed his admiration of Isaac Newtons work. These were prefixed to Newtons Principia, for which Halley supervised the publication. Translation as given in Peter Gay, The Enlightenment: The Science of Freedom (1996), 131.

A thorough advocate in a just cause, a penetrating mathematician facing the starry heavens, both alike bear the semblance of divinity

As for those wingy mysteries in divinity, and airy subtleties in religion, which have unhinged the brains of better heads, they never stretched the pia mater of mine: methinks there be not impossibilities enough in Religion for an active faith.

But to proceed; as in order and place, so also in matter of her Creation, Woman far excells Man. things receive their value from the matter they are made of, and the excellent skill of their maker: Pots of common clay must not contend with China-dishes, nor pewter utensils vye dignity with those of silver. Woman was not composed of any inanimate or vile dirt, but of a more refined and purified substance, enlivened and actuated by a Rational Soul, whose operations speak it a beam, or bright ray of Divinity.

Could Hamlet have been written by a committee, or the “Mona Lisa” painted by a club? Could the New Testament have been composed as a conference report? Creative ideas do not spring from groups. They spring from individuals. The divine spark leaps from the finger of God to the finger of Adam, whether it takes ultimate shape in a law of physics or a law of the land, a poem or a policy, a sonata or a mechanical computer.

Even a speck of dust is pervaded by divinity.

Evolution: At the Mind's Cinema
I turn the handle and the story starts:
Reel after reel is all astronomy,
Till life, enkindled in a niche of sky,
Leaps on the stage to play a million parts.
Life leaves the slime and through all ocean darts;
She conquers earth, and raises wings to fly;
Then spirit blooms, and learns how not to die,-
Nesting beyond the grave in others' hearts.
I turn the handle: other men like me
Have made the film: and now I sit and look
In quiet, privileged like Divinity
To read the roaring world as in a book.
If this thy past, where shall they future climb,
O Spirit, built of Elements and Time?

Forests were the first temples of the Divinity, and it is in the forests that men have grasped the first idea of architecture.

I have always looked upon alchemy in natural philosophy to be like enthusiasm in divinity, and to have troubled the world much to the same.

If Newton had flourished in ancient Greece, he would have been worshipped as a Divinity.

Men who are occupied in the restoration of health to other men, by the joint exertion of skill and humanity, are above all the great of the earth. They even partake of divinity, since to preserve and renew is almost as noble as to create.

My view of our planet was a glimpse of divinity.

Nature is full of genius, full of the divinity; so that not a snowflake escapes its fashioning hand.

Nothing is accidental in the universe this is one of my Laws of Physicsexcept the entire universe itself, which is Pure Accident, pure divinity.

Science ... in other words, knowledgeis not the enemy of religion; for, if so, then religion would mean ignorance. But it is often the antagonist of school-divinity. 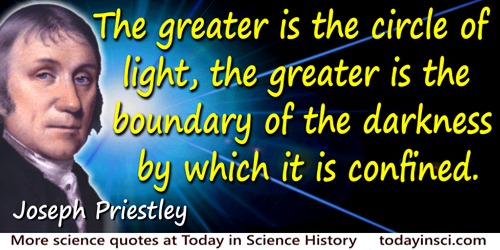 The greater is the circle of light, the greater is the boundary of the darkness by which it is confined. But, notwithstanding this, the more light we get, the more thankful we ought to be, for by this means we have the greater range for satisfactory contemplation. In time the bounds of light will be still farther extended; and from the infinity of the divine nature, and the divine works, we may promise ourselves an endless progress in our investigation of them: a prospect truly sublime and glorious.

From Ain-i-Akbery (c.1590). As translated from the original Persian, by Francis Gladwin in 'Akbars Conduct and Administrative Rules', 'Regulations For Teaching in the Public Schools', Ayeen Akbery: Or, The Institutes of the Emperor Akber (1783), Vol. 1, 290. Note: Akbar (Akber) was a great ruler; he was an enlightened statesman. He instituted a great system for general education. 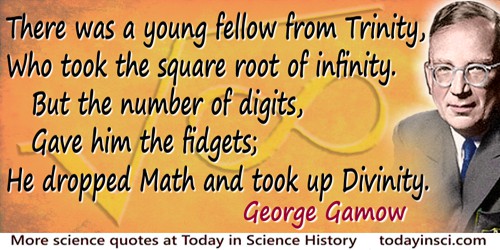 There was a young fellow from Trinity,
Who took the square root of infinity.
But the number of digits,
Gave him the fidgets;
He dropped Math and took up Divinity.

Epigraph on title page of One, Two, Three Infinity: Facts and Speculations of Science (1947, 1988), i. The original text shows symbols instead of the words which appear above as square root of infinity.

In Of Proficience and Advancement of Learning Divine and Human (1605), collected in The Works of Francis Bacon (1711), Vol. 2, 417. Charles Darwin placed this quote on the title page of his On the Origin of Species.