All over the world there lingers on the memory of a giant tree, the primal tree, rising up from the centre of the Earth to the heavens and ordering the universe around it. It united the three worlds: its roots plunged down into subterranean abysses, Its loftiest branches touched the empyrean. Thanks to the Tree, it became possible to breathe the air; to all the creatures that then appeared on Earth it dispensed its fruit, ripened by the sun and nourished by the water which it drew from the soil. From the sky it attracted the lightning from which man made fire and, beckoning skyward, where clouds gathered around its fall. The Tree was the source of all life, and of all regeneration. Small wonder then that tree-worship was so prevalent in ancient times.

All truth passes through three stages. First, it is ridiculed. Second, it is violently opposed. Third, it is accepted as being self-evident. [Caution: expressed in this wording, it is likely misattributed.]

Schopenhauer did write a different reflection with this theme, much less tersely, on how the acceptance of truth has only one short victory celebration is granted between the two long periods where it is despised as paradox and condemned as trivial. See the Introduction to The World as Will and Representation (1819), xvi. The three stages quote is included here so it may be found with this caution: it is questionable that Schopenhauer expressed this idea with this wording. Although widely repeated, Webmaster has not yet found any citation to a primary source for these words. (Schopenhauer was German, so any quote in English represents a translation.) According to Ralph Keys, diligent search by scholars has found no written source in German, either. The sentiment has been variously restated and attributed to other authors. A somewhat better-documented version of the three stages of truth is attributed to Louis Agassiz, though still with only second-person references. See Ralph Keyes, The Quote Verifier (2006), 225-226.

Certainlie these things agree,
The Priest, the Lawyer, & Death all three:
Death takes both the weak and the strong.
The lawyer takes from both right and wrong,
And the priest from living and dead has his Fee.

If nature had arranged that husbands and wives should have children alternatively, there would never be more than three in a family.

Attributed without further citation. In Edmund Fuller, Thesaurus of Quotations (1941), 154.

The mathematics of cooperation of men and tools is interesting. Separated men trying their individual experiments contribute in proportion to their numbers and their work may be called mathematically additive. The effect of a single piece of apparatus given to one man is also additive only, but when a group of men are cooperating, as distinct from merely operating, their work raises with some higher power of the number than the first power. It approaches the square for two men and the cube for three. Two men cooperating with two different pieces of apparatus, say a special furnace and a pyrometer or a hydraulic press and new chemical substances, are more powerful than their arithmetical sum. These facts doubtless assist as assets of a research laboratory.

Quoted from a speech delivered at the fiftieth anniversary of granting of M.I.T's charter, in Guy Suits, 'Willis Rodney Whitney', National Academy of Sciences, Biographical Memoirs (1960), 352.

The most remarkable feature about the magnitude scale was that it worked at all and that it could be extended on a worldwide basis. It was originally envisaged as a rather rough-and-ready procedure by which we could grade earthquakes. We would have been happy if we could have assigned just three categories, large, medium, and small; the point is, we wanted to avoid personal judgments. It actually turned out to be quite a finely tuned scale. 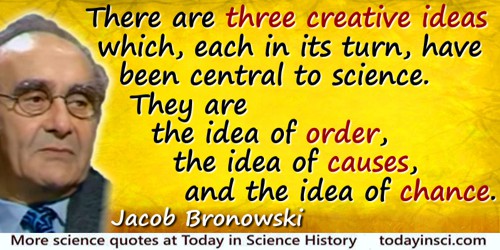 There are three creative ideas which, each in its turn, have been central to science. They are the idea of order, the idea of causes, and the idea of chance.