A short, broad man of tremendous vitality, the physical type of Hereward, the last of the English, and his brother-in-arms, Winter, Sylvesterâ€™s capacious head was ever lost in the highest cloud-lands of pure mathematics. Often in the dead of night he would get his favorite pupil, that he might communicate the very last product of his creative thought. Everything he saw suggested to him something new in the higher algebra. This transmutation of everything into new mathematics was a revelation to those who knew him intimately. They began to do it themselves. His ease and fertility of invention proved a constant encouragement, while his contempt for provincial stupidities, such as the American hieroglyphics for π and e, which have even found their way into Websterâ€™s Dictionary, made each young worker apply to himself the strictest tests.

De Morgan was explaining to an actuary what was the chance that a certain proportion of some group of people would at the end of a given time be alive; and quoted the actuarial formula, involving p [pi], which, in answer to a question, he explained stood for the ratio of the circumference of a circle to its diameter. His acquaintance, who had so far listened to the explanation with interest, interrupted him and exclaimed, â€śMy dear friend, that must be a delusion, what can a circle have to do with the number of people alive at a given time?â€ť

A special case of a formula published by Euler in his Introductio ad analysin infinitorum (1748), Vol. 1. However, he did not print it, either there or elsewhere. An early printing, maybe the first, is due to J. F. FranĂ§ais in Annales des mathematique pures et appliquĂ©es 1813-1814, 4, 66. The formula was also highlighted by the American mathematician Benjamin Peirce around 1840. But its rise to 'fame' remains obscure.

If pi wasnâ€™t around, there would be no round pies!

Recalling his own comment made at age 10, used as an epigraph in In Praise of Simple Physics: The Science and Mathematics behind Everyday Questions (2016), 11.

It can be of no practical use to know that Pi is irrational, but if we can know, it surely would be intolerable not to know.

Once when lecturing to a class he [Lord Kelvin] used the word â€śmathematician,â€ť and then interrupting himself asked his class: â€śDo you know what a mathematician is?â€ť Stepping to the blackboard he wrote upon it:â€” [an integral expression equal to the square root of pi]
Then putting his finger on what he had written, he turned to his class and said: â€śA mathematician is one to whom that is as obvious as that twice two makes four is to you. Liouville was a mathematician.â€ť

Piphobia is an irrational fear.

The Biblical value of pi, by comparison, is exactly three, as is clear from a verse in 1 Kings vii 23: 'and he made a molten sea, ten cubits from brim to brim, and his height was five cubit; and a line of thirty cubits did encompass him round about.' 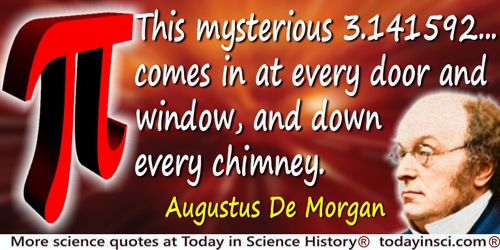 This mysterious 3.141592..., which comes in at every door and window, and down every chimney, calling itself the circumference to a unit of diameter.

In 'A Budget of Paradoxes', AthenĂ¦um Journal (14 Oct 1865). As cited in John Harris, Kuklos, an Experimental Investigation Into the Relationship of Certain Lines (1870), 9.

What good your beautiful proof on [the transcendence of] π? Why investigate such problems, given that irrational numbers do not even exist?

[As a youth, fiddling in my home laboratory] I discovered a formula for the frequency of a resonant circuit which was 2π x sqrt(LC) where L is the inductance and C the capacitance of the circuit. And there was π, and where was the circle? â€¦ I still donâ€™t quite know where that circle is, where that π comes from.

From address to the National Science Teachersâ€™ Association convention (Apr 1966), 'What Is Science?', collected in Richard Phillips Feynman and Jeffrey Robbins (ed.), The Pleasure of Finding Things Out: The Best Short Works of Richard P. Feynman (1999, 2005), 177.