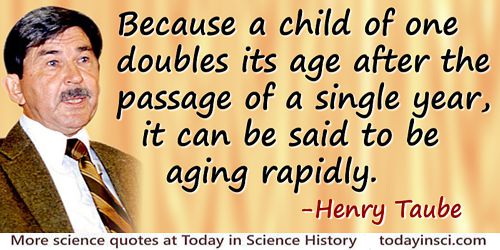 Because a child of one doubles its age after the passage of a single year, it can be said to be aging rapidly.

Circles to square and cubes to double
Would give a man excessive trouble.
The longitude uncertain roams,
In spite of Whiston and his bombs.

In 'Alma', Canto III, in Samuel Johnson, The Works of the English Poets, from Chaucer to Cowper (1810), 203. The reference to longitude reflects the difficulty of its determination at sea, and the public interest in the attempts to win the prize instituted by the British government in 1714 for a successful way to find longitude at sea (eventually won by John Harrison's chronometer). In this poem, William Whiston (who succeeded Isaac Newton as Lucasian Professor at Cambridge) is being satirized for what many thought was a crack-brained scheme to find the longitude. This proposed, with Humphrey Ditton, the use of widely separated ships firing off shells programmed to explode at a set time, and calculation of distance between them made from the time-lag between the observed sounds of the explosions using the known speed of sound.

For all these years you were merely
A smear of light through our telescopes
On the clearest, coldest night; a hint
Of a glint, just a few pixels wide
On even your most perfectly-framed portraits.
But now, now we see you!
Swimming out of the dark - a great
Stone shark, your star-tanned skin pitted
And pocked, scarred after eons of drifting
Silently through the endless ocean of space.
Here on Earth our faces lit up as we saw
You clearly for the first time; eyes wide
With wonder we traced the strangely familiar
Grooves raked across your sides,
Wondering if Rosetta had doubled back to Mars
And raced past Phobos by mistake 
Then you were gone, falling back into the black,
Not to be seen by human eyes again for a thousand
Blue Moons or more. But we know you now,
We know you; youll never be just a speck of light again.

He that borrows the aid of an equal understanding, doubles his own; he that uses that of a superior elevates his own to the stature of that he contemplates.

If the earths population continues to double every 50 years (as it is now doing) then by 2550 A.D. it will have increased 3,000-fold.  by 2800 A.D., it would reach 630,000 billion! Our planet would have standing room only, for there would be only two-and-a-half square feet per person on the entire land surface, including Greenland and Antarctica. In fact, if the human species could be imagined as continuing to multiply further at the same rate, by 4200 A.D. the total mass of human tissue would be equal to the mass of the earth.

Once in a cycle the comet
Doubles its lonesome track.
Enriched with the tears of a thousand years,
Aeschylus wanders back.

One day a math-deficient frog was sitting on a tiny lily pad in a big ponda lily pad that doubled in size each nightand on this day the pad covered just one-eighth of the pond. The frog still saw the vast majority of his beloved water and so was unconcerned. Then, just three days later, he woke to find the pond had vanished while he slept.

Epigraph, without citation, 'A sad cautionary tale for frogs with their heads in the sand.' in In Praise of Simple Physics: The Science and Mathematics behind Everyday Questions (2016), 11.

Population, when unchecked, goes on doubling itself every twenty-five years, or increases in a geometrical ratio.  The means of subsistence, under circumstances the most favorable to human industry, could not possibly be made to increase faster than in an arithmetical ratio.

The Sun is no lonelier than its neighbors; indeed, it is a very common-place star,dwarfish, though not minute,like hundreds, nay thousands, of others. By accident the brighter component of Alpha Centauri (which is double) is almost the Sun's twin in brightness, mass, and size. Could this Earth be transported to its vicinity by some supernatural power, and set revolving about it, at a little less than a hundred million miles' distance, the star would heat and light the world just as the Sun does, and life and civilization might go on with no radical change. The Milky Way would girdle the heavens as before; some of our familiar constellations, such as Orion, would be little changed, though others would be greatly altered by the shifting of the nearer stars. An unfamiliar brilliant star, between Cassiopeia and Perseus would bethe Sun. Looking back at it with our telescopes, we could photograph its spectrum, observe its motion among the stars, and convince ourselves that it was the same old Sun; but what had happened to the rest of our planetary system we would not know.

What vexes me most is, that my female friends, who could bear me very well a dozen years ago, have now forsaken me, although I am not so old in proportion to them as I formerly was: which I can prove by arithmetic, for then I was double their age, which now I am not.