And God said, āLet the earth put forth vegetation, plants yielding seed, and fruit trees bearing fruit in which is their seed, each according to its kind.ā And God saw that it was good. And there was evening and there was morning, a third day. 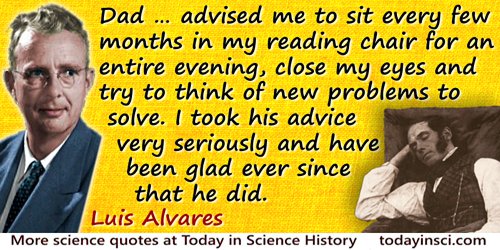 Dad [Walter C. Alvarez] ā¦ advised me to sit every few months in my reading chair for an entire evening, close my eyes and try to think of new problems to solve. I took his advice very seriously and have been glad ever since that he did.

Every 12 years Jupiter returns to the same position in the sky; every 370 days it disappears in the fire of the Sun in the evening to the west, 30 days later it reappears in the morning to the east...[Observation in 4th century B.C.]

In the lost book Suixing Jing (Treatise on Jupiter), quoted in the extensive compilation Kaiyuan Zhanjing, (The Kaiyuan Treatise on Astrology (compiled 718-726). Quotation as given in Norman K. Glendenning, Our Place in the Universe (2007), 126. Source cited in Helaine Selin, Encyclopaedia of the History of Science, Technology, and Medicine in Non-Western Cultures (1997), 342.

Gas Lights - Without Oil, Tallow, Wicks or Smoke. It is not necessary to invite attention to the gas lights by which my salon of paintings is now illuminated; those who have seen the ring beset with gems of light are sufficiently disposed to spread their reputation; the purpose of this notice is merely to say that the Museum will be illuminated every evening until the public curiosity be gratified.
[Promoting the gas lights Peale installed to attract paying visitors to his museum of portraits and natural history exhibits.]

I begin my work at about nine or ten o'clock in the evening and continue until four or five in the morning. Night is a more quiet time to work. It aids thought.

In Orison Swett Marden, 'Bell Telephone Talk: Hints on Success by Alexander G. Bell', How They Succeeded: Life Stories of Successful Men Told by Themselves (1901), 31.

In the year of chan yan..., Jupiter was in [the Zodiacal Division of] Zi, it rose in the morning and went under in the evening together with the Lunar Mansions Xunu, Xu and Wei. It was very large and bright. Apparently, there was a small reddish (chi) star appended (fu) to its side. This is called “an alliance” (tong meng).

It is a happy world after all. The air, the earth, the water teem with delighted existence. In a spring noon, or a summer evening, on whichever side I turn my eyes, myriads of happy beings crowd upon my view. āThe insect youth are on the wing.ā Swarms of new-born flies are trying their pinions in the air. Their sportive motions, their wanton mazes, their gratuitous activity testify their joy and the exultation they feel in their lately discovered faculties ā¦ The whole winged insect tribe, it is probable, are equally intent upon their proper employments, and under every variety of constitution, gratified, and perhaps equally gratified, by the offices which the author of their nature has assigned to them.

Natural Theology: or, Evidences of the Existence and Attributes of The Deity, Collected from the Appearances of Nature (1802), 490-1.

My fatherās collection of fossils was practically unnamed, but the appearance of Phillipsā book [Geology of the Yorkshire Coast], in which most of our specimens were figured, enabled us to remedy this defect. Every evening was devoted by us to accomplishing the work. This was my first introduction to true scientific study. ā¦ Phillipsā accurate volume initiated an entirely new order of things. Many a time did I mourn over the publication of this book, and the consequences immediately resulting from it. Instead of indulging in the games and idleness to which most lads are prone, my evenings throughout a long winter were devoted to the detested labour of naming these miserable stones. Such is the short-sightedness of boyhood. Pursuing this uncongenial work gave me in my thirteenth year a thorough practical familiarity with the palaeontological treasures of Eastern Yorkshire. This early acquisition happily moulded the entire course of my future life.

On Breaking Habits. To begin knocking off the habit in the evening, then the afternoon as well and, finally, the morning too is better than to begin cutting it off in the morning and then go on to the afternoon and evening. I speak from experience as regards smoking and can say that when one comes to within an hour or two of smoke-time one begins to be impatient for it, whereas there will be no impatience after the time for knocking off has been confirmed as a habit.

On May 15, 1957 Linus Pauling made an extraordinary speech to the students of Washington University. ... It was at this time that the idea of the scientists' petition against nuclear weapons tests was born. That evening we discussed it at length after dinner at my house and various ones of those present were scribbling and suggesting paragraphs. But it was Linus Pauling himself who contributed the simple prose of the petition that was much superior to any of the suggestions we were making.

The forests in his strength rejoice;
Hark! on the evening breeze,
As once of old, the Lord God's voice
Is heard among the trees.

The history of aĆ«ronautic adventure affords a curious illustration of the same [dip of the horizon] principle. The late Mr. Sadler, the celebrated aeronaut, ascended on one occasion in a balloon from Dublin, and was wafted across the Irish Channel, when, on his approach to the Welsh coast, the balloon descended nearly to the surface of the sea. By this time the sun was set, and the shades of evening began to close in. He threw out nearly all his ballast, and suddenly sprang upwards to a great height, and by so doing brought his horizon to dip below the sun, producing the whole phenomenon of a western sunrise. Subsequently descending in Wales, he of course witnessed a second sunset on the same evening.

This describes how a rapidly ascending balloonist can see more of a setting sun, from the top down, as the viewer gradually rises more and thus sees further, beyond the curvature of the earth. The sun gradually appears as if at sunrise. It is the reverse of the view of a ship sailing toward the horizon which disappears from its hull up to the tip of the mast. In Outlines of Astronomy (1849), 20. A similar description appeared earlier, in Astronomy (1833), 36, which also footnoted Herschel's comment that he had this anecdote from Dr. Lardner, who was present at the ascent