Macbeth: How does your patient, doctor?
Doctor: Not so sick, my lord,
As she is troubled with thick-coming fancies,
That keep her from her rest.
Macbeth: Cure her of that.
Canst thou not minister to a mind diseased,
Pluck from the memory a rooted sorrow,
Raze out the written troubles of the brain,
And with some sweet oblivious antidote
Cleanse the stuffed bosom of that perilous stuff
Which weighs upon the heart?
Doctor: Therein the patient
Must minister to himself.
Macbeth: Throw physic to the dogs; I'll none of it.

A mind which has once imbibed a taste for scientific enquiry, and has learnt the habit of applying its principles readily to the cases which occur, has within itself an inexhaustable source of pure and exciting contemplations: One would think that Shakespeare had such a mind in view when he describes a contemplative man as finding
Tongues in treesbooks in running brooks
Sermons in stonesand good in everything.
Accustomed to trace the operations of general causes and the exemplification of general laws, in circumstances where the uninformed and uninquiring eye, perceives neither novelty nor beauty, he walks in the midst of wonders; every object which falls in his way elucidates some principle, affords some instruction and impresses him with a sense of harmony and order. Nor is it a mere passive pleasure which is thus communicated. A thousand questions are continually arising in his mind, a thousand objects of enquiry presenting themselves, which keep his faculties in constant exercise, and his thoughts perpetually on the wing, so that lassitude is excluded from his life, and that craving after artificial excitement and dissipation of the mind, which leads so many into frivolous, unworthy, and destructive pursuits, is altogether eradicated from his bosom.

A rose is the visible result of an infinitude of complicated goings on in the bosom of the earth and in the air above, and similarly a work of art is the product of strange activities in the human mind.

I think that I shall never see
A poem as lovely as a tree.
A tree whose hungry mouth is prest
Against the earths sweet flowing breast;
A tree that looks at God all day,
And lifts her leafy arms to pray;
A tree that may in Summer wear
A nest of robins in her hair;
Upon whose bosom snow has lain;
Who intimately lives with rain.
Poems are made by fools like me,
But only God can make a tree.

Let him look at that dazzling light hung aloft as an eternal lamp to lighten the universe; let him behold the earth, a mere dot compared with the vast circuit which that orb describes, and stand amazed to find that the vast circuit itself is but a very fine point compared with the orbit traced by the stars as they roll their course on high. But if our vision halts there, let imagination pass beyond; it will fail to form a conception long before Nature fails to supply material. The whole visible world is but an imperceptible speck in the ample bosom of Nature. No notion comes near it. Though we may extend our thought beyond imaginable space, yet compared with reality we bring to birth mere atoms. Nature is an infinite sphere whereof the centre is everywhere, the circumference nowhere. In short, imagination is brought to silence at the thought, and that is the most perceptible sign of the all-power of God.
Let man reawake and consider what he is compared with the reality of things; regard himself lost in this remote corner of Nature; and from the tiny cell where he lodges, to wit the Universe, weigh at their true worth earth, kingdoms, towns, himself. What is a man face to face with infinity?

The living and dead look well together in woods. Trees receive a most beautiful burial. Nature takes fallen trees gently to her bosomat rest from storms. They seem to have been called home out of the sky to sleep now.

In Linnie Marsh Wolfe (ed.), John of the Mountains: The Unpublished Journals of John Muir (1938 1979), 313. Entered in journal while on sled trip exploring Muir Glacier, its boundaries and tributaries; Hemlock Mountain (11-21 Jul 1890). 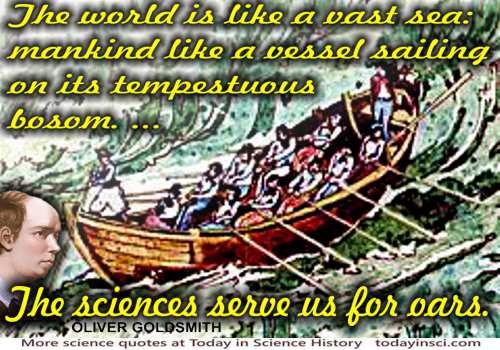 The world is like a vast sea: mankind like a vessel sailing on its tempestuous bosom.  [T]he sciences serve us for oars.

From concluding paragraph, 'Letters from a Chinese Philosopher', LXXXIII, first published in journal The Public Ledger collected in The Miscellaneous Works of Oliver Goldsmith (1762, 1809), 41.

This is the forest primeval. The murmuring pines and the hemlocks,
Bearded with moss, and in garments green, indistinct in the twilight,
Stand like Druids of eld, with voices sad and prophetic,
Stand like harpers hoar, with beards that rest on their bosoms.
Loud from its rocky caverns, the deep-voiced neighboring ocean
Speaks, and in accents disconsolate answers the wail of the forest.

Thus the great drama of universal life is perpetually sustained; and though the individual actors undergo continual change, the same parts are ever filled by another and another generation; renewing the face of the earth, and the bosom of the deep, with endless successions of life and happiness.

Geology and Mineralogy, Considered with Reference to Natural Theology (1836), Vol. I, 134.

What clearer evidence could we have had of the different formation of these rocks, and of the long interval which separated their formation, had we actually seen them emerging from the bosom of the deep?  The mind seemed to grow giddy by looking so far into the abyss of time.