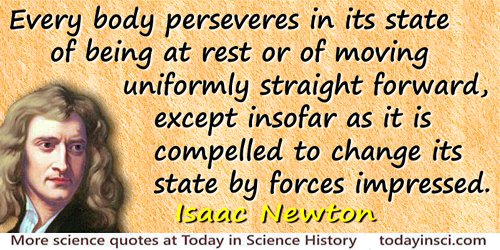 And thus Nature will be very conformable to her self and very simple, performing all the great Motions of the heavenly Bodies by the Attraction of Gravity which intercedes those Bodies, and almost all the small ones of their Particles by some other attractive and repelling Powers which intercede the Particles. The Vis inertiae is a passive Principle by which Bodies persist in their Motion or Rest, receive Motion in proportion to the Force impressing it, and resist as much as they are resisted. By this Principle alone there never could have been any Motion in the World. Some other Principle was necessary for putting Bodies into Motion; and now they are in Motion, some other Principle is necessary for conserving the Motion.

Ax: 100 Every thing doth naturally persevere in yt state in wch it is unlesse it bee interrupted by some externall cause, hence [a] body once moved will always keepe ye same celerity, quantity & determination of its motion.

Every body perseveres in its state of being at rest or of moving uniformly straight forward, except insofar as it is compelled to change its state by forces impressed. 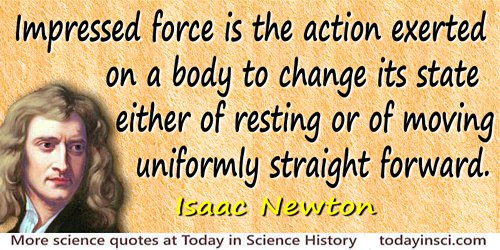 Impressed force is the action exerted on a body to change its state either of resting or of moving uniformly straight forward. 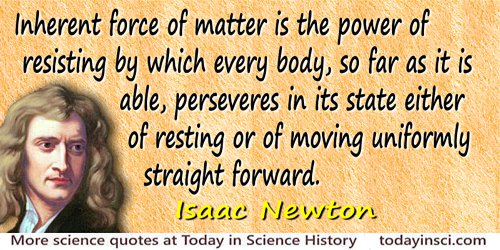 Inherent force of matter is the power of resisting by which every body, so far as it is able, perseveres in its state either of resting or of moving uniformly straight forward.

It is a peculiar feature in the fortune of principles of such high elementary generality and simplicity as characterise the laws of motion, that when they are once firmly established, or supposed to be so, men turn with weariness and impatience from all questionings of the grounds and nature of their authority. We often feel disposed to believe that truths so clear and comprehensive are necessary conditions, rather than empirical attributes of their subjects: that they are legible by their own axiomatic light, like the first truths of geometry, rather than discovered by the blind gropings of experience.

It seems to me farther, that these Particles have not only a Vis inertiae, accompanied with such passive Laws of Motion as naturally result from that Force, but also that they are moved by certain active Principles, such as that of Gravity, and that which causes Fermentation, and the Cohesion of Bodies. These Principles I consider, not as occult Qualities, supposed to result from the specifick Forms of Things, but as general Laws of Nature, by which the Things themselves are form'd; their Truth appearing to us by Phaenomena, though their Causes be not yet discover'd. For these are manifest Qualities, and their Causes only are occult. 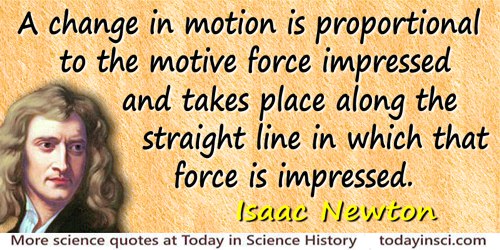 Law 2: A change in motion is proportional to the motive force impressed and takes place along the straight line in which that force is impressed.

Macaulay somewhere says, that it is extraordinary that, whereas the laws of the motions of the heavenly bodies, far removed as they are from us, are perfectly well understood, the laws of the human mind, which are under our observation all day and every day, are no better understood than they were two thousand years ago.

Newtons laws of motion made it possible to state on one page facts about nature which would otherwise require whole libraries. Maxwells laws of electricity and magnetism also had an abbreviating effect.

The great Sir Isaac Newton,
He once made a valid proclamation,
That the forces equal to a nominated mass,
when multiplied by acceleration
That was the law of motion.

From lyrics of song Sods Law.

The persons who have been employed on these problems of applying the properties of matter and the laws of motion to the explanation of the phenomena of the world, and who have brought to them the high and admirable qualities which such an office requires, have justly excited in a very eminent degree the admiration which mankind feels for great intellectual powers. Their names occupy a distinguished place in literary history; and probably there are no scientific reputations of the last century higher, and none more merited, than those earned by great mathematicians who have laboured with such wonderful success in unfolding the mechanism of the heavens; such for instance as D Alembert, Clairaut, Euler, Lagrange, Laplace.

To any action there is always an opposite and equal reaction; in other words, the actions of two bodies upon each other are always equal and always opposite in direction.