1839ŌĆöThe fermentation satire
THE MYSTERY OF ALCOHOLIC FERMENTATION RESOLVED
(Preliminary Report by Letter) Schwindler
I am about to develop a new theory of wine fermentation ŌĆ” Depending on the weight, these seeds carry fermentation to completion somewhat less than as in the beginning, which is understandable ŌĆ” I shall develop a new theory of wine fermentation [showing] what simple means Nature employs in creating the most amazing phenomena. I owe it to the use of an excellent microscope designed by Pistorius.
When brewerŌĆÖs yeast is mixed with water the microscope reveals that the yeast dissolves into endless small balls, which are scarcely 1/800th of a line in diameter ŌĆ” If these small balls are placed in sugar water, it can be seen that they consist of the eggs of animals. As they expand, they burst, and from them develop small creatures that multiply with unbelievable rapidity in a most unheard of way. The form of these animals differs from all of the 600 types described up until now. They possess the shape of a Beinsdorff still (without the cooling apparatus). The head of the tube is a sort of proboscis, the inside of which is filled with fine bristles 1/2000th of a line long. Teeth and eyes are not discernible; however, a stomach, intestinal canal, anus (a rose red dot), and organs for secretion of urine are plainly discernible. From the moment they are released from the egg one can see these animals swallow the sugar from the solution and pass it to the stomach. It is digested immediately, a process recognized easily by the resultant evacuation of excrements. In a word, these infusors eat sugar, evacuate ethyl alcohol from the intestinal canal, and carbon dioxide from the urinary organs. The bladder, in the filled state, has the form of a champagne bottle; when empty, it is a small button ŌĆ” As soon as the animals find no more sugar present, they eat each other up, which occurs through a peculiar manipulation; everything is digested down to the eggs which pass unchanged through the intestinal canal. Finally, one again fermentable yeast, namely the seed of the animals, which remain over.

And let me adde, that he that throughly understands the nature of Ferments and Fermentations, shall probably be much better able than he that Ignores them, to give a fair account of divers Ph├”nomena of severall diseases (as well Feavers and others) which will perhaps be never throughly understood, without an insight into the doctrine of Fermentation.

Essay 2, 'Offering some Particulars relating to the Pathologicall Part of Physick', in the Second Part of Some Considerations Touching The Usefulnesse of Naturall Philosophy (1663, 1664), 43.

But nothing of a nature foreign to the duties of my profession [clergyman] engaged my attention while I was at Leeds so much as the, prosecution of my experiments relating to electricity, and especially the doctrine of air. The last I was led into a consequence of inhabiting a house adjoining to a public brewery, where first amused myself with making experiments on fixed air [carbon dioxide] which found ready made in the process of fermentation. When I removed from that house, I was under the necessity making the fixed air for myself; and one experiment leading to another, as I have distinctly and faithfully noted in my various publications on the subject, I by degrees contrived a convenient apparatus for the purpose, but of the cheapest kind. When I began these experiments I knew very little of chemistry, and had in a manner no idea on the subject before I attended a course of chymical lectures delivered in the Academy at Warrington by Dr. Turner of Liverpool. But I have often thought that upon the whole, this circumstance was no disadvantage to me; as in this situation I was led to devise an apparatus and processes of my own, adapted to my peculiar views. Whereas, if I had been previously accustomed to the usual chemical processes, I should not have so easily thought of any other; and without new modes of operation I should hardly have discovered anything materially new.

Discoveries are not generally made in the order of their scientific arrangement: their connexions and relations are made out gradually; and it is only when the fermentation of invention has subsided that the whole clears into simplicity and order.

In 'The Equilibrium of Forces on a Point', Elementary Treatise on Mechanics (1819), Vol. 1, Preface, iii.

Fermentation is the exhalation of a substance through the admixture of a ferment which, by virtue of its spirit, penetrates the mass and transforms it into its own nature.

I have wished to see chemistry applied to domestic objects, to malting, for instance, brewing, making cider, to fermentation and distillation generally, to the making of bread, butter, cheese, soap, to the incubation of eggs, &c.

I will now direct the attention of scientists to a previously unnoticed cause which brings about the metamorphosis and decomposition phenomena which are usually called decay, putrefaction, rotting, fermentation and moldering. This cause is the ability possessed by a body engaged in decomposition or combination, i.e. in chemical action, to give rise in a body in contact with it the same ability to undergo the same change which it experiences itself.

In general, art has preceded science. Men have executed great, and curious, and beautiful works before they had a scientific insight into the principles on which the success of their labours was founded. There were good artificers in brass and iron before the principles of the chemistry of metals were known; there was wine among men before there was a philosophy of vinous fermentation; there were mighty masses raised into the air, cyclopean walls and cromlechs, obelisks and pyramidsŌĆöprobably gigantic Doric pillars and entablaturesŌĆöbefore there was a theory of the mechanical powers. ŌĆ” Art was the mother of Science.

It seems to me farther, that these Particles have not only a Vis inertiae, accompanied with such passive Laws of Motion as naturally result from that Force, but also that they are moved by certain active Principles, such as that of Gravity, and that which causes Fermentation, and the Cohesion of Bodies. These Principles I consider, not as occult Qualities, supposed to result from the specifick Forms of Things, but as general Laws of Nature, by which the Things themselves are form'd; their Truth appearing to us by Phaenomena, though their Causes be not yet discover'd. For these are manifest Qualities, and their Causes only are occult.

My present and most fixed opinion regarding the nature of alcoholic fermentation is this: The chemical act of fermentation is essentially a phenomenon correlative with a vital act, beginning and ending with the latter. I believe that there is never any alcoholic fermentation without their being simultaneously the organization, development, multiplication of the globules, or the pursued, continued life of globules which are already formed.

Seeing therefore the variety of Motion which we find in the World is always decreasing, there is a necessity of conserving and recruiting it by active Principles, such as are the cause of Gravity, by which Planets and Comets keep their Motions in their Orbs, and Bodies acquire great Motion in falling; and the cause of Fermentation, by which the Heart and Blood of Animals are kept in perpetual Motion and Heat; the inward Parts of the Earth are constantly warm'd, and in some places grow very hot; Bodies burn and shine, Mountains take fire, the Caverns of the Earth are blown up, and the Sun continues violently hot and lucid, and warms all things by his Light. For we meet with very little Motion in the World, besides what is owing to these active Principles. 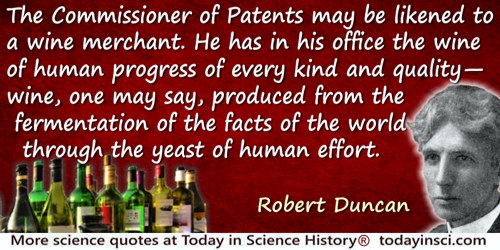 The Commissioner of Patents may be likened to a wine merchant. He has in his office the wine of human progress of every kind and qualityŌĆöwine, one may say, produced from the fermentation of the facts of the world through the yeast of human effort. Sometimes the yeast is ŌĆ£wildŌĆØ and sometimes the ŌĆ£mustŌĆØ is poor, and while it all lies there shining with its due measure of the sparkle of divine effort, it is but occasionally that one finds a wine whose bouquet is the result of a pure culture on the true fruit of knowledge. But it is this true, pure wine of discovery that is alone of lasting significance.

The initiation of the fermentation process does not require so complicated an apparatus as is represented by the living cell. The agent responsible for the fermenting action of the press juice is rather to be regarded as a dissolved substance, doubtless a protein; this will be denoted zymase.

We are now witnessing, after the slow fermentation of fifty years, a concentration of technical power aimed at the essential determinants of heredity, development and disease. This concentration is made possible by the common function of nucleic acids as the molecular midwife of all reproductive particles. Indeed it is the nucleic acids which, in spite of their chemical obscurity, are giving to biology a unity which has so far been lacking, a chemical unity.