...I may say that in my opinion true Science and true Religion neither are nor could be opposed.

All true science must aim at objective truth, and that means that the human observer must never allow himself to get emotionally mixed up with his subject-matter. His concern is to understand the universe, not to improve it. Detachment is obligatory.

Astronomers and physicists, dealing habitually with objects and quantities far beyond the reach of the senses, even with the aid of the most powerful aids that ingenuity has been able to devise, tend almost inevitably to fall into the ways of thinking of men dealing with objects and quantities that do not exist at all, e.g., theologians and metaphysicians. Thus their speculations tend almost inevitably to depart from the field of true science, which is that of precise observation, and to become mere soaring in the empyrean. The process works backward, too. That is to say, their reports of what they pretend actually to see are often very unreliable. It is thus no wonder that, of all men of science, they are the most given to flirting with theology. Nor is it remarkable that, in the popular belief, most astronomers end by losing their minds.

False interpretation of the Bible has often clashed with science, as false science has with true interpretation; but true science is the natural ally of religion, for both are from God.

For between true Science, and erroneous Doctrines, Ignorance is in the middle. Naturall sense and imagination, are not subject to absurdity. Nature it selfe cannot erre: and as men abound in copiousnesses of language; so they become more wise, or more mad than ordinary. Nor is it possible without Letters for any man to become either excellently wise, or (unless his memory be hurt by disease, or ill constitution of organs) excellently foolish. For words are wise men's counters, they do but reckon by them; but they are the money of fools that value them by the authority of an Aristotle, a Cicero, or a Thomas, or any other Doctor whatsoever, if but a man.

I always rejoice to hear of your being still employed in experimental researches into nature, and of the success you meet with. The rapid progress true science now makes, occasions my regretting sometimes that I was born so soon: it is impossible to imagine the height to which may be carried, in a thousand years, the power of man over matter; we may perhaps learn to deprive large masses of their gravity, and give them absolute levity for the sake of easy transport. Agriculture may diminish its labour and double its produce; all diseases may by sure means be prevented or cured (not excepting even that of old age), and our lives lengthened at pleasure even beyond the antediluvian standard. Oh! that moral science were in as fair a way of improvement; that men would cease to be wolves to one another; and that human beings would at length learn what they now improperly call humanity!

I think chemistry is being frittered away by the hairsplitting of the organic chemists; we have new compounds discovered, which scarcely differ from the known ones and when discovered are valueless—very illustrations perhaps of their refinements in analysis, but very little aiding the progress of true science.

In order to turn natural history into a true science, one would have to devote oneself to investigations capable of telling us not the particular shape of such and such an animal, but the general procedures of nature in the animal's production and preservation.

No Geologist worth anything is permanently bound to a desk or laboratory, but the charming notion that true science can only be based on unbiased observation of nature in the raw is mythology. Creative work, in geology and anywhere else, is interaction and synthesis: half-baked ideas from a bar room, rocks in the field, chains of thought from lonely walks, numbers squeezed from rocks in a laboratory, numbers from a calculator riveted to a desk, fancy equipment usually malfunctioning on expensive ships, cheap equipment in the human cranium, arguments before a road cut.

The dreadful cocksureness that is characteristic of scientists in bulk is not only quite foreign to the spirit of true science, it is not even justified by a superficial view.

The fairest thing we can experience is the mysterious. It is the fundamental emotion which stands at the cradle of true art and true science. He who knows it not and can no longer wonder, no longer feel amazement, is as good as dead, a snuffed-out candle. It was the experience of mysteryâ€“even if mixed with fearâ€“that engendered religion. A knowledge of the existence of something we cannot penetrate, of the manifestations of the profoundest reason and the most radiant beauty, which are only accessible to our reason in their most elementary formsâ€“it is this knowledge and this emotion that constitute the truly religious attitude; in this sense, and in this alone, I am a deeply religious man.

The fairest thing we can experience is the mysterious. It is the fundamental emotion which stands at the cradle of true science. He who knows it not, and can no longer wonder, no longer feel amazement, is as good as dead. We all had this priceless talent when we were young. But as time goes by, many of us lose it. The true scientist never loses the faculty of amazement. It is the essence of his being.

The finest emotion of which we are capable is the mystic emotion. Herein lies the germ of all art and all true science.

True science and true religion are twin sisters, and the separation of either from the other is sure to prove the death of both. Science prospers exactly in proportion as it is religious; and religion flourishes in exact proportion to the scientific depth and firmness of its basis.

As quoted from the close of a recent lecture by Huxley in 'What Knowledge is of Most Worth'. Lectures in Education, by Herbert Spencer, delivered at the Royal Institution (1855). In The Westminster Review (Jul 1859), 22. Collected in Essays on Education and Kindred Subjects (1911), 41.

True science investigates and brings to human perception such truths and such knowledge as the people of a given time and society consider most important. Art transmits these truths from the region of perception to the region of emotion. 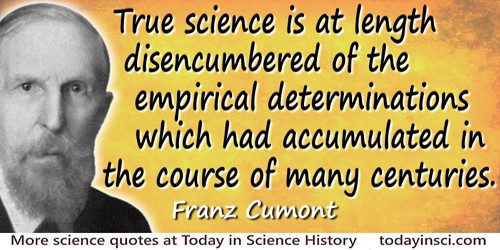 True science is at length disencumbered of the empirical determinations which had accumulated in the course of many centuries.

True science is distinctively the study of useless things. For the useful things will get studied without the aid of scientific men. To employ these rare minds on such work is like running a steam engine by burning diamonds.

True science is never speculative; it employs hypotheses as suggesting points for inquiry, but it never adopts the hypotheses as though they were demonstrated propositions.

True science teaches us to doubt and, in ignorance, to refrain.

True science teaches, above all, to doubt and to be ignorant.