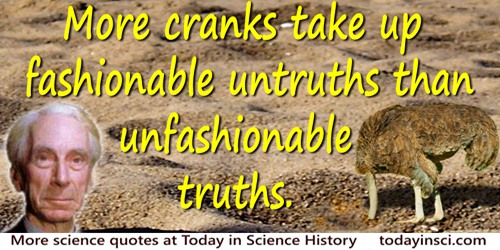 A man with a new idea is a crank until he succeeds.

And so to those of you who may be vitalists I would make this prophecy: what everyone believed yesterday, and you believe today, only cranks will believe tomorrow.

As we discern a fine line between crank and genius, so also (and unfortunately) we must acknowledge an equally graded trajectory from crank to demagogue. When people learn no tools of judgment and merely follow their hopes, the seeds of political manipulation are sown.

For, in mathematics or symbolic logic, reason can crank out the answer from the symboled equationseven a calculating machine can often do sobut it cannot alone set up the equations. Imagination resides in the words which define and connect the symbolssubtract them from the most aridly rigorous mathematical treatise and all meaning vanishes. Was it Eddington who said that we once thought if we understood 1 we understood 2, for 1 and 1 are 2, but we have since found we must learn a good deal more about and?

Gardner writes about various kinds of cranks with the conscious superiority of the scientist. He asserts that the scientist, unlike the crank, does his best to remain open-minded, so how can he be so sure that no sane person has ever seen a flying saucer?  A.J. Ayer once remarked wryly I wish I was as certain of anything as he seems to be about everything.

Had I been present at the Creation, I would have given some useful hints for the better ordering of the universe.
Remarking on the complexity of Ptolemaic model of the universe after it was explained to him.
Footnote: Carlyle says, in his History of Frederick the Great, book ii. chap. vii. that this saying of Alphonso about Ptolemy's astronomy, 'that it seemed a crank machine; that it was pity the Creator had not taken advice,' is still remembered by mankind,  this and no other of his many sayings.

In John Bartlett and Nathan Haskell Dole (Ed.), Familiar Quotations: A Collection of Passages, Phrases, and Proverbs Traced to Their Sources (1914), 954.

If the man doesnt believe as we do, we say he is a crank, and that settles it. I mean, it does nowadays, because now we cant burn him.

It is unworthy of excellent men to lose hours like slaves in the labour of calculation which could safely be relegated to anyone else if machines were used.
Describing, in 1685, the value to astronomers of the hand-cranked calculating machine he had invented in 1673.

From 'Machina Arithmetica in qua non Aditio tantum Subtractio', as translated by Mark Kormes in David Eugene Smith, A Source Book in Mathematics (1929), 181.

Mr. Thomas A. Edison recently came into this office, placed a little machine on our desk, turned a crank, and the machine enquired as to our health, asked how we liked the phonograph, informed us that it was well, and bid us a cordial good night. These remarks were not only perfectly audible to ourselves, but to a dozen or more persons gathered around.

Students of the heavens are separable into astronomers and astrologers as readily as the minor domestic ruminants into sheep and goats, but the separation of philosophers into sages and cranks seems to be more sensitive to frames of reference.

Thanks to the freedom of our press and the electronic media, the voices of cranks are often louder and clearer than the voices of genuine scientists. Crank bookson how to lose weight without cutting down on calories, on how to talk to plants, on how to cure your ailments by rubbing your feet, on how to apply horoscopes to your pets, on how to use ESP in making business decisions, on how to sharpen razor blades by putting them under little models of the great Pyramid of Egyptfar outsell many books I reserve the right of moral indignation.

As quoted, without citation, in obituary by Morton Schatzman, 'Martin Gardner: Scientific and Philosophical Writer Celebrated for his Ingenious Mathematical Puzzles and Games', Independent (28 May 2010).

The so-called crank may be quite original in his ideas.  Invention, however, in the engineering sense involves originality; but not that alone, if the results are to be of value. There is imagination more or less fertile, but with it a knowledge of what has been done before, carried perhaps by the memory, together with a sense of the present or prospective needs in art or industry. Necessity is not always the mother of invention. It may be prevision.

There are infinite possibilities of error, and more cranks take up fashionable untruths than unfashionable truths.

When you get up here in space and you go into the weightlessness environment, your body is not sure what really just happened to it. So your stomach, intestines, and that stuff kind of shuts down for a few hours to figure out what is going on and during that timeframe your body is not doing much with your food. After your body figures out that it can handle the new environment, everything cranks back up and your food, stomach and intestines and all start working like normal.

[In] the evolution of ideas New ideas are thrown up spontaneously like mutations; the vast majority of them are useless crank theories, the equivalent of biological freaks without survival-value.

True is it, my incorporate friends, quoth he, That I receive the general food at first, Which you do live upon; and fit it is, Because I am the storehouse and the shop Of the whole body. But, if you do remember, I send it through the rivers of your blood, Even to the court, the heart, to th seat o th brain; And, through the cranks and offices of man, The strongest nerves and small inferior veins From me receive that natural competency Whereby they live. And though that all at once You, good friends, this says the belly, mark me.

[Told as a fable, this is the bellys answer to a complaint from the other members of the body that it received all the food but did no work.] In Coriolanus (1623), Act 1, Scene 1, line 130-141. Webmasters note: The Fable of the Belly has its roots in antiquity. William Harvey delivered a lecture in Apr 1616 on his discovery the circulation of blood in the body, but did not publish until 1628.