Air Chief Marshal Harris [objecting to a change in strategy recommended by statisticians]: Are we fighting this war with weapons or the slide rule?
Churchill [after puffing on his cigar]: That's a good idea. Let's try the slide rule.

During World War II, Britain lost the advantage when enemy U-boats began listening in to the aircraft radar, were forewarned, and would dive. U-boat sinkings fell to zero. Physicist Patrick S. Blackett with his Operational Research colleagues came up with a solution. Concentrate sufficient aircraft in certain areas, causing the subs to dive so frequently their air supply and batteries were exhausted, forcing them to remain on the surface and be vulnerable to attack. The strategy required diverting several squadrons from Bomber Command to Coastal Command. Bomber Harris voiced his objection to Churchill, who made the right choice, proved by successful results. As described by R.V. Jones, 'Churchill and Science', in Robert Blake and Wm. Roger Louis (eds.), Churchill (1996), 437.

The Charms of Statistics.It is difficult to understand why statisticians commonly limit their inquiries to Averages, and do not revel in more comprehensive views. Their souls seem as dull to the charm of variety as that of the native of one of our flat English counties, whose retrospect of Switzerland was that, if its mountains could be thrown into its lakes, two nuisances would be got rid of at once. An Average is but a solitary fact, whereas if a single other fact be added to it, an entire Normal Scheme, which nearly corresponds to the observed one, starts potentially into existence. Some people hate the very name of statistics, but I find them full of beauty and interest. Whenever they are not brutalised, but delicately handled by the higher methods, and are warily interpreted, their power of dealing with complicated phenomena is extraordinary. They are the only tools by which an opening can be cut through the formidable thicket of difficulties that bars the path of those who pursue the Science of man.

A statistician carefully assembles the facts and figures for others who carefully misinterpret them.

A statistician is a person who believes that if you put your head in a furnace and your feet in a bucket of iced water, on the average you should feel reasonably comfortable.

Found, for example, in Planning a Prevention Program: A Handbook for the Youth Worker in an Alcohol Service Agency (1977), 3.

A statistician is one who has learned how to get valid evidence from statistics and how (usually) to avoid being misled by irrelevant facts. Its too bad that we apply the same name to this kind of person that we use for those who only tabulate. Its as if we had the same name for barbers and brain surgeons because they both work on the head.

A statistician is someone who is good with numbers but lacks the personality to be an accountant.
[Or economist]

Found, for example, in A Prairie Home Companion Pretty Good Joke Book (4th ed., 2005), 216. Also seen as defining an Economist in Eighteen Annual Institute on Securities Regulation (1987), 131, which quotes it as Tim Wirth used to say. 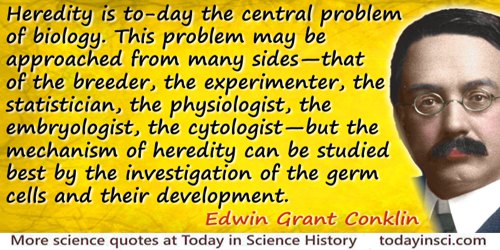 Heredity is to-day the central problem of biology. This problem may be approached from many sidesthat of the breeder, the experimenter, the statistician, the physiologist, the embryologist, the cytologistbut the mechanism of heredity can be studied best by the investigation of the germ cells and their development.

If your result needs a statistician then you should design a better experiment.

In India, theres lack of appreciation of the need to cross-examine data, the responsibility of a statistician.

Like the statistician who was drowned in a lake of average depth six inches.

Statistician: A man who believes figures don't lie but admits that, under analysis some of them won't stand up either.

Statistician: A man who believes figures dont lie, but admits that under analysis some of them wont stand up either.

Statistician: One who knows which numbers to use in any eventuality.

Statisticians tell us that for many years the death-rate from cancer has been slowly but steadily rising: and not unnaturally, many people conclude from this that for some reason or other we are becoming more susceptible to cancer. Actually, that conclusion does not follow at all. The rise in the cancer death-rate is probably due entirely to the fact that other causes of death have been reduced. Numbers of people who, if they had been born a century earlier, would have died in their twenties of typhoid or smallpox, say, are now living on into their seventies and dying of cancer. 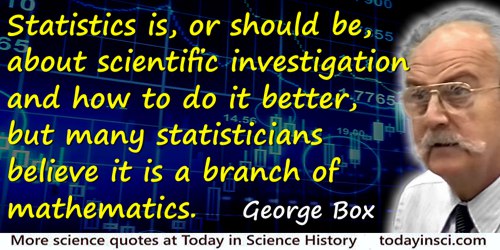 Statistics is, or should be, about scientific investigation and how to do it better, but many statisticians believe it is a branch of mathematics.

The best thing about being a statistician is that you get to play in everyones backyard.

The frequent allegation that the selective processes in the human species are no longer 'natural' is due to persistence of the obsolete nineteenth-century concept of 'natural' selection. The error of this view is made clear when we ask its proponents such questions as, why should the 'surviving fittest' be able to withstand cold and inclement weather without the benefit of fire and clothing? Is it not ludicrous to expect selection to make us good at defending ourselves against wild beasts when wild beasts are getting to be so rare that it is a privilege to see one outside of a zoo? Is it necessary to eliminate everyone who has poor teeth when our dentists stand ready to provide us with artificial ones? Is it a great virtue to be able to endure pain when anaesthetics are available?
[Co-author with American statistician Gordon Allen]

The investigation of causal relations between economic phenomena presents many problems of peculiar difficulty, and offers many opportunities for fallacious conclusions. Since the statistician can seldom or never make experiments for himself, he has to accept the data of daily experience, and discuss as best he can the relations of a whole group of changes; he cannot, like the physicist, narrow down the issue to the effect of one variation at a time. The problems of statistics are in this sense far more complex than the problems of physics.

The outlook seems grim. Natural selection under civilized conditions may lead mankind to evolve towards a state of genetic overspecialization for living in gadget-ridden environments. It is certainly up to man to decide whether this direction of his evolution is or is not desirable. If it is not, man has, or soon will have, the knowledge requisite to redirect the evolution of his species pretty much as he sees fit. Perhaps we should not be too dogmatic about this choice of direction. We may be awfully soft compared to paleolithic men when it comes to struggling, unaided by gadgets, with climatic difficulties and wild beasts. Most of us feel most of the time that this is not a very great loss. If our remote descendants grow to be even more effete than we are, they may conceivably be compensated by acquiring genotypes conducive to kindlier dispositions and greater intellectual capacities than those prevalent in mankind today.
[Co-author with American statistician Gordon Allen.] 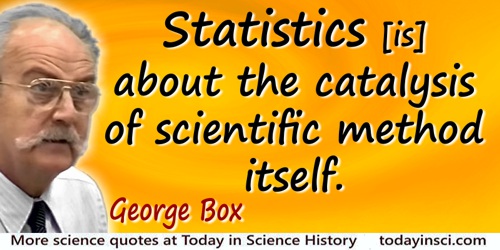 The reason that, having started as a chemist, I became a statistician was that Statistics seemed to me of much greater importance. It was about the catalysis of scientific method itself.

The statistician cannot excuse himself from the duty of getting his head clear on the principles of scientific inference, but equally no other thinking man can avoid a like obligation.

There is more than a germ of truth in the suggestion that, in a society where statisticians thrive, liberty and individuality are likely to be emasculated.

Thou shalt not answer questionnaires
Or quizzes upon World-Affairs,
Nor with compliance
Take any test. Thou shalt not sit
With statisticians nor commit
A social science.

Stanza from the Phi Beta Kappa poem 'Under Which Lyre (A Reactionary Tract for the Times)', which Auden wrote and delivered at the 1946 Victory Commencement of Harvard University (Jun 1946). Quoted in Adam Kirsch, 'A Poet's Warning', Harvard Magazine (Nov-Dec 2007) which gives more background on the poem. Also in Collected Poems of W.H. Auden (1976), 262.

To call in the statistician after the experiment is done may be no more than asking him to perform a postmortem examination: he may be able to say what the experiment died of.

Winwood Reade  remarks that while a man is an insoluble puzzle, in the aggregate he becomes a mathematical certainty. You can, for example, never foretell what any one man will do, but you can say with precision what an average number will be up to. Individuals vary, but percentages remain constant. So says the statistician.

Character Sherlock Holmes recommends Winwood Reades book The Martyrdom of Man to Dr. Watson in The Sign of the Four (1890), 196. Earlier in the novel, Holmes calls Reades book one of the most remarkable ever penned. Reade is a real person and his book was published in 1872. The actual statement in it reads: As a single atom man is an enigma: as a whole he is a mathematical problem.

[Florence Nightingale] was a great administrator, and to reach excellence here is impossible without being an ardent student of statistics. Florence Nightingale has been rightly termed the Passionate Statistician. Her statistics were more than a study, they were indeed her religion. For her, Quetelet was the hero as scientist, and the presentation copy of his Physique Sociale is annotated by her on every page. Florence Nightingale believedand in all the actions of her life acted upon that beliefthat the administrator could only be successful if he were guided by statistical knowledge. The legislatorto say nothing of the politiciantoo often failed for want of this knowledge. Nay, she went further: she held that the universeincluding human communitieswas evolving in accordance with a divine plan; that it was man's business to endeavour to understand this plan and guide his actions in sympathy with it. But to understand God's thoughts, she held we must study statistics, for these are the measure of his purpose. Thus the study of statistics was for her a religious duty.

Whats the collective noun for a group of statisticians?
"A quarrel."

In Sharon Bertsch McGrayne, The Theory that Would Not Die: How Bayes Rule Cracked the Enigma Code, Hunted Down Russian Submarines, and Emerged Triumphant from Two Centuries of Controversy (2011), 51. The author cryptically footnotes the source as Tukey, according to Brillinger e-mail. Presumably, these would be John W. Tukey (1915-2000) and his student David R. Brillinger (1937-)