Judicial astrology, pretended to foretell the fates of nations and individuals. Astrologer, One who pretends to foretell events, etc.

Astronomy may be revolutionized more than any other field of science by observations from above the atmosphere. Study of the planets, the Sun, the stars, and the rarified matter in space should all be profoundly influenced by measurements from balloons, rockets, probes and satellites. ... In a new adventure of discovery no one can foretell what will be found, and it is probably safe to predict that the most important new discovery that will be made with flying telescopes will be quite unexpected and unforeseen. (1961)

Early Greek astronomers, derived their first knowledge from the Egyptians, and these from the Chaldeans, among whom the science was studied, at a very early period. Their knowledge of astronomy, which gave their learned men the name of Magi, wise men, afterwards degenerated into astrology, or the art of consulting the position of the stars to foretel eventsand hence sprung the silly occupation of sooth saying, for which the Chaldeans were noted to a proverb, in later ages.

In the year 1456 ... a Comet was seen passing Retrograde between the Earth and the sun... Hence I dare venture to foretell, that it will return again in the year 1758. 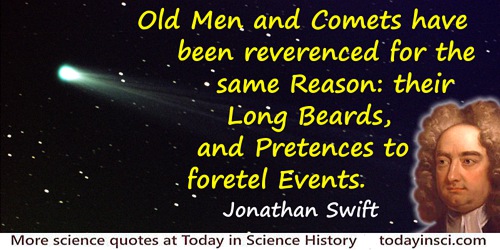 Old Men and Comets have been reverenced for the same Reason: their Long Beards, and Pretences to foretel Events.

The determining cause of most wars in the past has been, and probably will be of all wars in the future, the uncertainty of the result; war is acknowledged to be a challenge to the Unknown, it is often spoken of as an appeal to the God of Battles. The province of science is to foretell; this is true of every department of science. And the time must comehow soon we do not knowwhen the real science of war, something quite different from the application of science to the means of war, will make it possible to foresee with certainty the issue of a projected war. That will mark the end of battles; for however strong the spirit of contention, no nation will spend its money in a fight in which it knows it must lose.

The doctrine called Philosophical Necessity is simply this: that, given the motives which are present to an individuals mind, and given likewise the character and disposition of the individual, the manner in which he will act might be unerringly inferred: that if we knew the person thoroughly, and knew all the inducements which are acting upon him, we could foretell his conduct with as much certainty as we can predict any physical event.

The hypotheses which we accept ought to explain phenomena which we have observed. But they ought to do more than this; our hypotheses ought to foretell phenomena which have not yet been observed; ... because if the rule prevails, it includes all cases; and will determine them all, if we can only calculate its real consequences. Hence it will predict the results of new combinations, as well as explain the appearances which have occurred in old ones. And that it does this with certainty and correctness, is one mode in which the hypothesis is to be verified as right and useful.

The value of history is, indeed, not scientific but moral: by liberalizing the mind, by deepening the sympathies, by fortifying the will, it enables us to control, not society, but ourselvesa much more important thing; it prepares us to live more humanely in the present and to meet rather than to foretell the future.

In 'A New Philosophy of History', The Dial (2 Sep 1915), 148. This is Beckers concluding remark in his review of a book by L. Cecil Jane, The Interpretation of History. Becker refutes Janes idea that the value of history lies in whether it consists in furnishing some clue as to what the future will bring.

Till facts be grouped and called there can be no prediction. The only advantage of discovering laws is to foretell what will happen and to see the bearing of scattered facts.

Winwood Reade  remarks that while a man is an insoluble puzzle, in the aggregate he becomes a mathematical certainty. You can, for example, never foretell what any one man will do, but you can say with precision what an average number will be up to. Individuals vary, but percentages remain constant. So says the statistician.

Character Sherlock Holmes recommends Winwood Reades book The Martyrdom of Man to Dr. Watson in The Sign of the Four (1890), 196. Earlier in the novel, Holmes calls Reades book one of the most remarkable ever penned. Reade is a real person and his book was published in 1872. The actual statement in it reads: As a single atom man is an enigma: as a whole he is a mathematical problem.