A living organism must be studied from two distinct aspects. One of these is the causal-analytic aspect which is so fruitfully applicable to ontogeny. The other is the historical descriptive aspect which is unravelling lines of phylogeny with ever-increasing precision. Each of these aspects may make suggestions concerning the possible significance of events seen under the other, but does not explain or translate them into simpler terms.

All that stuff I was taught about evolution, embryology, Big Bang theory, all that is lies straight from the pit of hell. Its lies to try to keep me and all the folks who are taught that from understanding that they need a savior.
[Revealing his anti-science views, contrary to the qualifications needed to make important public policy on matters of science.] 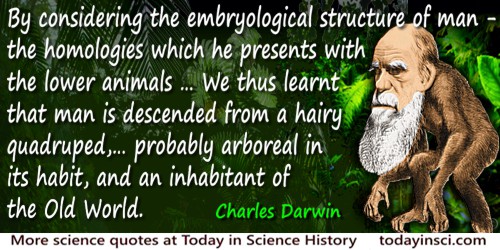 By considering the embryological structure of man - the homologies which he presents with the lower animals - the rudiments which he retains - and the reversions to which he is liable, we can partly recall in imagination the former condition of our early progenitors; and we can approximately place them in their proper position in the zoological series. We thus learnt that man is descended from a hairy quadruped, furnished with a tail and pointed ears, probably arboreal in its habit, and an inhabitant of the Old World. This creature, if its whole structure had been examined by a naturalist, would have been classed among the Quadrumana, as surely as would be the common and still more ancient progenitor of the Old and New World monkeys. 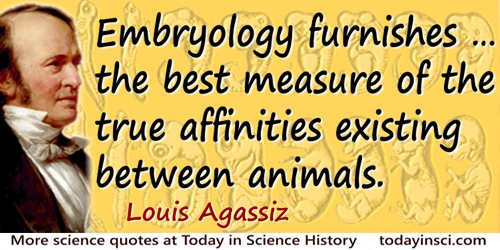 Embryology furnishes  the best measure of the true affinities existing between animals.

In 'Essay on Classification', Contributions to the Natural History of the United States of America (1857), Pt. 1, 85.

Embryology will often reveal to us the structure, in some degree obscured, of the prototype of each great class.

My only wish would be to have ten more lives to live on this planet. If that were possible, Id spend one lifetime each in embryology, genetics, physics, astronomy and geology. The other lifetimes would be as a pianist, backwoodsman, tennis player, or writer for the National Geographic.  Id like to keep open the option for another lifetime as a surgeon-scientist.

Shortened expression of the original statement in Ernst Haeckel and E. Ray Lankester (trans.), The History of Creation (1876), Vol. 2, 33. The original paragraph is elsewhere on this webpage with comment that Haeckel was incorrect.

The embryological record is almost always abbreviated in accordance with the tendency of nature (to be explained on the principle of survival of the fittest) to attain her needs by the easiest means.

The embryos of mammals, of birds, lizards, and snakes are, in their earliest states, exceedingly like one another, both as a whole and in the mode of development of their parts, indeed we can often distinguish such embryos only by their size. I have two little embryos in spirit [alcohol] to which I have omitted to attach the names. I am now quite unable to say to what class they belong.

The fertilized ovum of a mouse and a whale look much alike, but differences quickly show up in the course of their development. If we could study their molecules with the naked eyes, we would see the differences from the start.

Epigraph in Isaac Asimovs Book of Science and Nature Quotations (1988), 73.

The generation of seeds ... is therefore marvelous and analogous to the other productions of living things. For first of all an umbilicus appears. ... Its extremity gradually expands and after gathering a colliquamentous ichor becomes analogous to an amnion. ... In the course of time the seed or fetus begins to become visible.

The seed of a tree has the nature of a branch or twig or bud. While it grows upon the tree it is a part of the tree: but if separated and set in the earth to be better nourished, the embryo or young tree contained in it takes root and grows into a new tree.

As quoted in Roderick W. Home, Electricity and Experimental Physics in Eighteenth-century Europe (1992), 112.

We spend long hours discussing the curious situation that the two great bodies of biological knowledge, genetics and embryology, which were obviously intimately interrelated in development, had never been brought together in any revealing way. An obvious difficulty was that the most favorable organisms for genetics, Drosophila as a prime example, were not well suited for embryological study, and the classical objects of embryological study, sea urchins and frogs as examples, were not easily investigated genetically. What might we do about it? There were two obvious approaches: one to learn more about the genetics of an embryologically favourable organism, the other to better understand the development of Drosophila. We resolved to gamble up to a year of our lives on the latter approach, this in Ephrussis laboratory in Paris which was admirably equipped for tissue culture, tissue or organ transplantation, and related techniques.

[Other than fossils,] the most important of these other records of creation is, without doubt, ontogeny, that is, the history of the developmment of the organic individual (embryology and motamorphology). It briefly repeats in great and marked features the series of forms which the ancestors of the respective individuals have passed through from the beginning of their tribe. We have designated the palaeontological history of the development of the ancestors of a living form as the history of a tribe, or phylogeny, and we may therefore thus enunciate this exceedingly important biogenetic fundamental principle: Ontogeny is a short and quick repetition, or recapitulation, of Phylogeny, determined by the laws of Inheritance and Adaptation.

In Ernst Haeckel and E. Ray Lankester (trans.), The History of Creation (1876), Vol. 2, 33. Seen shortened to Ontogeny recapitulates phylogeny. This was Haeckel's (incorrect) answer to the vexing question of his time: what is the relationship between individual development (ontogeny) and the evolution of species and lineages (phylogeny)?