[About Sir Roderick Impey Murchison:] The enjoyments of elegant life you early chose to abandon, preferring to wander for many successive years over the rudest portions of Europe and Asiaregions new to Sciencein the hope, happily realized, of winning new truths.
By a rare union of favourable circumstances, and of personal qualifications equally rare, you have thus been enabled to become the recognized Interpreter and Historian (not without illustrious aid) of the Silurian Period.

A critic is a man who creates nothing and thereby feels qualified to judge the work of creative men. There is logic in this; he is unbiasedhe hates all creative people equally.

All that stuff I was taught about evolution, embryology, Big Bang theory, all that is lies straight from the pit of hell. Its lies to try to keep me and all the folks who are taught that from understanding that they need a savior.
[Revealing his anti-science views, contrary to the qualifications needed to make important public policy on matters of science.]

Because intelligence is our own most distinctive feature, we may incline to ascribe superior intelligence to the basic primate plan, or to the basic plan of the mammals in general, but this point requires some careful consideration. There is no question at all that most mammals of today are more intelligent than most reptiles of today. I am not going to try to define intelligence or to argue with those who deny thought or consciousness to any animal except man. It seems both common and scientific sense to admit that ability to learn, modification of action according to the situation, and other observable elements of behavior in animals reflect their degrees of intelligence and permit us, if only roughly, to compare these degrees. In spite of all difficulties and all the qualifications with which the expert (quite properly) hedges his conclusions, it also seems sensible to conclude that by and large an animal is likely to be more intelligent if it has a larger brain at a given body size and especially if its brain shows greater development of those areas and structures best developed in our own brains. After all, we know we are intelligent, even though we wish we were more so.

I might, as a Rustick, omit the Ceremony of a Preface, were it not reasonable to expect, that an Apology will be required for writing and publishing a Book without the usual Qualifications of an Author.  I was so far from being inclined to the Scribbling Disease, that I had disused Writing for above twenty Years, before I was prevaild on to commit my Thoughts upon Husbandry, and the Descriptions of my Engines to Paper.

In the early days of dealing with climate change, I wouldnt go out on a limb one way or another, because I dont have the qualifications there. But I do have the qualifications to measure the scientific community and see what the consensus is about climate change. I remember the moment when I suddenly thought it was incontrovertible. There was a lecture given by a distinguished American expert in atmospheric science and he showed a series of graphs about the temperature changes in the upper atmosphere. He plotted time against population growth and industrialisation. It was incontrovertible, and once you think its really totally incontrovertible, then you have a responsibility to say so. 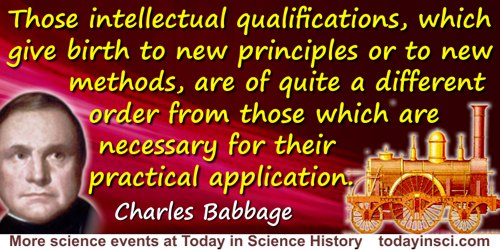 Make it compulsory for a doctor using a brass plate to have inscribed on it, in addition to the letters indicating his qualifications, the words Remember that I too am mortal.

Science, history and politics are not suited for discussion except by experts. Others are simply in the position of requiring more information; and, till they have acquired all available information, cannot do anything but accept on authority the opinions of those better qualified.

The Foundations of Mathematics and Other Logical Essays (1931), Epilogue, 287-8.

The general mental qualification necessary for scientific advancement is that which is usually denominated common sense, though added to this, imagination, induction, and trained logic, either of common language or of mathematics, are important adjuncts.

From presidential address (24 Nov 1877) to the Philosophical Society of Washington. As cited by L.A. Bauer in his retiring president address (5 Dec 1908), 'The Instruments and Methods of Research', published in Philosophical Society of Washington Bulletin, 15, 103. Reprinted in William Crookes (ed.) The Chemical News and Journal of Industrial Science (30 Jul 1909), 59.

The value of mathematical instruction as a preparation for those more difficult investigations, consists in the applicability not of its doctrines but of its methods. Mathematics will ever remain the past perfect type of the deductive method in general; and the applications of mathematics to the simpler branches of physics furnish the only school in which philosophers can effectually learn the most difficult and important of their art, the employment of the laws of simpler phenomena for explaining and predicting those of the more complex. These grounds are quite sufficient for deeming mathematical training an indispensable basis of real scientific education, and regarding with Plato, one who is  as wanting in one of the most essential qualifications for the successful cultivation of the higher branches of philosophy

We must avoid the impression that the qualification for election is that the prostate is larger than the brain.

Speaking on the age of election of fellows at the Australian Academy of Science, 1980.

When the war finally came to an end, 1 was at a loss as to what to do. ... I took stock of my qualifications. A not-very-good degree, redeemed somewhat by my achievements at the Admiralty. A knowledge of certain restricted parts of magnetism and hydrodynamics, neither of them subjects for which I felt the least bit of enthusiasm.
No published papers at all  [Only gradually did I realize that this lack of qualification could be an advantage. By the time most scientists have reached age thirty they are trapped by their own expertise. They have invested so much effort in one particular field that it is often extremely difficult, at that time in their careers, to make a radical change. I, on the other hand, knew nothing, except for a basic training in somewhat old-fashioned physics and mathematics and an ability to turn my hand to new things.  Since I essentially knew nothing, I had an almost completely free choice.

[Louis Rendu, Bishop of Annecy] collects observations, makes experiments, and tries to obtain numerical results; always taking care, however, so to state his premises and qualify his conclusions that nobody shall be led to ascribe to his numbers a greater accuracy than they merit. It is impossible to read his work, and not feel that he was a man of essentially truthful mind and that science missed an ornament when he was appropriated by the Church.