... one of the main functions of an analogy or model is to suggest extensions of the theory by considering extensions of the analogy, since more is known about the analogy than is known about the subject matter of the theory itself  A collection of observable concepts in a purely formal hypothesis suggesting no analogy with anything would consequently not suggest either any directions for its own development.

'Operational Definition and Analogy in Physical Theories', British Journal for the Philosophy of Science (Feb 1952), 2, No. 8, 291. 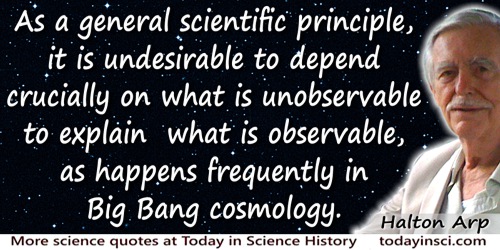 As a general scientific principle, it is undesirable to depend crucially on what is unobservable to explain what is observable, as happens frequently in Big Bang cosmology.

Because intelligence is our own most distinctive feature, we may incline to ascribe superior intelligence to the basic primate plan, or to the basic plan of the mammals in general, but this point requires some careful consideration. There is no question at all that most mammals of today are more intelligent than most reptiles of today. I am not going to try to define intelligence or to argue with those who deny thought or consciousness to any animal except man. It seems both common and scientific sense to admit that ability to learn, modification of action according to the situation, and other observable elements of behavior in animals reflect their degrees of intelligence and permit us, if only roughly, to compare these degrees. In spite of all difficulties and all the qualifications with which the expert (quite properly) hedges his conclusions, it also seems sensible to conclude that by and large an animal is likely to be more intelligent if it has a larger brain at a given body size and especially if its brain shows greater development of those areas and structures best developed in our own brains. After all, we know we are intelligent, even though we wish we were more so.

Cosmology is a science which has only a few observable facts to work with. The discovery of the cosmic microwave background radiation added onethe present radiation temperature of the universe. This, however, was a significant increase in our knowledge since it requires a cosmology with a source for the radiation at an early epoch and is a new probe of that epoch. More sensitive measurements of the background radiation in the future will allow us to discover additional facts about the universe.

'Discovery of the Cosmic Microwave Background', in B. Bertotti (ed.) Modern Cosmology in Retrospect (1990), 304.

Every living language, like the perspiring bodies of living creatures, is in perpetual motion and alteration; some words go off, and become obsolete; others are taken in, and by degrees grow into common use; or the same word is inverted to a new sense and notion, which in tract of time makes as observable a change in the air and features of a language as age makes in the lines and mien of a face.

If the universe is measurably curved today, cosmologists must accept the miraculous fact that this is so for the first time in the 1010-year history of the universe; if it had been measurably non-flat at much earlier times, it would be much more obviously curved today than it is. This line of reasoning suggests that the observable universe is essentially exactly flat: that it contains precisely the critical density of mass.

(1986). As quoted in Isaac Asimov's Book of Science and Nature Quotations.

If we consider that part of the theory of relativity which may nowadays in a sense be regarded as bone fide scientific knowledge, we note two aspects which have a major bearing on this theory. The whole development of the theory turns on the question of whether there are physically preferred states of motion in Nature (physical relativity problem). Also, concepts and distinctions are only admissible to the extent that observable facts can be assigned to them without ambiguity (stipulation that concepts and distinctions should have meaning). This postulate, pertaining to epistemology, proves to be of fundamental importance.

It is always observable that the physical and the exact sciences are the last to suffer under despotisms.

It seems sensible to discard all hope of observing hitherto unobservable quantities, such as the position and period of the electron... Instead it seems more reasonable to try to establish a theoretical quantum mechanics, analogous to classical mechanics, but in which only relations between observable quantities occur.

In Helge Kragh, Quantum Generations: A History of Physics in the Twentieth Century (1999), 161.

Our experience shows that not everything that is observable and measurable is predictable, no matter how complete our past observations may have been.

Science has to be understood in its broadest sense, as a method for apprehending all observable reality, and not merely as an instrument for acquiring specialized knowledge.

In Alfred Armand Montapert, Words of Wisdom to Live By: An Encyclopedia of Wisdom in Condensed Form (1986), 217, without citation. If you know the primary source, please contact Webmaster.

Since science's competence extends to observable and measurable phenomena, not to the inner being of things, and to the means, not to the ends of human life, it would be nonsense to expect that the progress of science will provide men with a new type of metaphysics, ethics, or religion.

The experiment serves two purposes, often independent one from the other: it allows the observation of new facts, hitherto either unsuspected, or not yet well defined; and it determines whether a working hypothesis fits the world of observable facts.

The hypothetical character of continual creation has been pointed out, but why is it more of a hypothesis to say that creation is taking place now than that it took place in the past? On the contrary, the hypothesis of continual creation is more fertile in that it answers more questions and yields more results, and results that are, at least in principle, observable. To push the entire question of creation into the past is to restrict science to a discussion of what happened after creation while forbidding it to examine creation itself. This is a counsel of despair to be taken only if everything else fails.

The King saw them with no common satisfaction, expressing his desire in no particular to have yt Stellar fish engraven and printed. We wish very much, Sir, yt you could procure for us a particular description of yesd Fish, viz. whether it be common there; what is observable in it when alive; what colour it then hath; what kind of motion in the water; what use it maketh of all that curious workmanship, wch Nature hath adorn'd it with?

The plan followed by nature in producing animals clearly comprises a predominant prime cause. This endows animal life with the power to make organization gradually more complex, and to bring increasing complexity and perfection not only to the total organization but also to each individual apparatus when it comes to be established by animal life. This progressive complication of organisms was in effect accomplished by the said principal cause in all existing animals. Occasionally a foreign, accidental, and therefore variable cause has interfered with the execution of the plan, without, however, destroying it. This has created gaps in the series, in the form either of terminal branches that depart from the series in several points and alter its simplicity, or of anomalies observable in specific apparatuses of various organisms.

The varieties of chemical substances actually found in living things are vastly more restricted than the possible varieties. A striking illustration is that if one molecule each of all the possible types of proteins were made, they would together weigh more than the observable universe. Obviously there are a fantastically large number of protein types that are not made by living cells.

There is no end of hypotheses about consciousness, particularly by philosophers. But most of these are not what we might call principled scientific theories, based on observables and related to the functions of the brain and body. Several theories of consciousness based on functionalism and on the machine model of the mind... have recently been proposed. These generally come in two flavors: one in which consciousness is assumed to be efficacious, and another in which it is considered an epiphenomenon. In the first, consciousness is likened to the executive in a computer systems program, and in the second, to a fascinating but more or less useless by-product of computation.

Today scientists describe the universe in terms of two basic partial theories—the general theory of relativity and quantum mechanics. They are the great intellectual achievements of the first half of this century. The general theory of relativity describes the force of gravity and the large-scale structure of the universe, that is, the structure on scales from only a few miles to as large as a million million million million (1 with twenty-four zeros after it) miles, the size of the observable universe. Quantum mechanics, on the other hand, deals with phenomena on extremely small scales, such as a millionth of a millionth of an inch. Unfortunately, however, these two theories are known to be inconsistent with each other—they cannot both be correct.

What the use of P [the significance level] implies, therefore, is that a hypothesis that may be true may be rejected because it has not predicted observable results that have not occurred.

certain conditions under which the observable thing is perceived are tacitly assumed ... for the possibility that we deal with hallucinations or a dream can never be excluded.