A first-rate laboratory is one in which mediocre scientists can produce outstanding work.

After that, I thought about what a proposition generally needs in order to be true and certain because, since I had just found one that I knew was such, I thought I should also know what this certainty consists in. Having noticed that there is nothing at all in the proposition I think, therefore I am [cogito ergo sum] which convinces me that I speak the truth, apart from the fact that I see very clearly that one has to exist in order to think, I judged that I could adopt as a general rule that those things we conceive very clearly and distinctly are all true. The only outstanding difficulty is in recognizing which ones we conceive distinctly.

Almost all the greatest discoveries in astronomy have resulted from what we have elsewhere termed Residual Phenomena, of a qualitative or numerical kind, of such portions of the numerical or quantitative results of observation as remain outstanding and unaccounted for, after subducting and allowing for all that would result from the strict application of known principles. 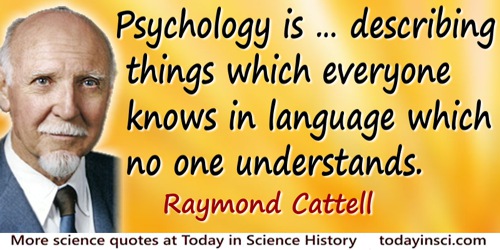 But psychology is a more tricky field, in which even outstanding authorities have been known to run in circles, describing things which everyone knows in language which no one understands.

Fortunately I experienced Max Wertheimer's teaching in Berlin and collaborated for over a decade with Wolfgang Köhler. I need not emphasize my debts to these outstanding personalities. The fundamental ideas of Gestalt theory are the foundation of all our investigations in the field of the will, of affection, and of the personality.

From the time of Aristotle it had been said that man is a social animal: that human beings naturally form communities. I couldnt accept it. The whole of history and pre-history is against it. The two dreadful world wars we have recently been through, and the gearing of our entire economy today for defensive war belie it. Man's loathsome cruelty to man is his most outstanding characteristic; it is explicable only in terms of his carnivorous and cannibalistic origin. Robert Hartmann pointed out that both rude and civilised peoples show unspeakable cruelty to one another. We call it inhuman cruelty; but these dreadful things are unhappily truly human, because there is nothing like them in the animal world. A lion or tiger kills to eat, but the indiscriminate slaughter and calculated cruelty of human beings is quite unexampled in nature, especially among the apes. They display no hostility to man or other animals unless attacked. Even then their first reaction is to run away.

Geology depends on impressions made by floods, earthquakes, volcanoes. The mountains tell the story of their oppressions and rebellions. The outstanding data of this science of Mother Earth are those furnished by the most violent impressions that mark an epoch in evolution

If Nicolaus Copernicus, the distinguished and incomparable master, in this work had not been deprived of exquisite and faultless instruments, he would have left us this science far more well-established. For he, if anybody, was outstanding and had the most perfect understanding of the geometrical and arithmetical requisites for building up this discipline. Nor was he in any respect inferior to Ptolemy; on the contrary, he surpassed him greatly in certain fields, particularly as far as the device of fitness and compendious harmony in hypotheses is concerned. And his apparently absurd opinion that the Earth revolves does not obstruct this estimate, because a circular motion designed to go on uniformly about another point than the very center of the circle, as actually found in the Ptolemaic hypotheses of all the planets except that of the Sun, offends against the very basic principles of our discipline in a far more absurd and intolerable way than does the attributing to the Earth one motion or another which, being a natural motion, turns out to be imperceptible. There does not at all arise from this assumption so many unsuitable consequences as most people think.

From Letter (20 Jan 1587) to Christopher Rothman, chief astronomer of the Landgrave of Hesse. Webmaster seeks more information to better cite this source  please contact if you can furnish more. Webmaster originally found this quote introduced by an uncredited anonymous commentary explaining the context: It was not just the Church that resisted the heliocentrism of Copernicus. Many prominent figures, in the decades following the 1543 publication of De Revolutionibus, regarded the Copernican model of the universe as a mathematical artifice which, though it yielded astronomical predictions of superior accuracy, could not be considered a true representation of physical reality.

In order to imbue civilization with sound principles and enliven it with the spirit of the gospel, it is not enough to be illumined with the gift of faith and enkindled with the desire of forwarding a good cause. For this end it is necessary to take an active part in the various organizations and influence them from within. And since our present age is one of outstanding scientific and technical progress and excellence, one will not be able to enter these organizations and work effectively from within unless he is scientifically competent, technically capable and skilled in the practice of his own profession.

Mapping the human genome has been compared with putting a man on the moon, but I believe it is more than that. This is the outstanding achievement not only of our lifetime, but in terms of human history. A few months ago I compared the project to the invention of the wheel. On reflection, it is more than that. I can well imagine technology making the wheel obsolete. But this code is the essence of mankind, and as long as humans exists, this code is going to be important and will be used.

Quoted in the press release 'The first draft of the Book of Humankind has been read', 26 Jun 2000. On the Sanger Institute web site at www.sanger.ac.uk/HGP/draft2000/mainrelease.shtml

Science is a progressive activity. The outstanding peculiarity of man is that he stumbled onto the possibility of progressive activities. Such progress, the accumulation of experience from generation to generation, depended first on the development of language, then of writing and finally of printing. These allowed the accumulation of tradition and of knowledge, of the whole aura of cultural inheritance that surrounds us. This has so conditioned our existence that it is almost impossible for us to stop and examine the nature of our culture. We accept it as we accept the air we breathe; we are as unconscious of our culture as a fish, presumably, is of water.

The ingenuity and effective logic that enabled chemists to determine complex molecular structures from the number of isomers, the reactivity of the molecule and of its fragments, the freezing point, the empirical formula, the molecular weight, etc., is one of the outstanding triumphs of the human mind.

What, then, is it in particular that can be learned from teachers of special distinction? Above all, what they teach is high standards. We measure everything, including ourselves, by comparisons; and in the absence of someone with outstanding ability there is a risk that we easily come to believe that we are excellent and much better than the next man. Mediocre people may appear big to themselves (and to others) if they are surrounded by small circumstances. By the same token, big people feel dwarfed in the company of giants, and this is a most useful feeling. So what the giants of science teach us is to see ourselves modestly and not to overrate ourselves.