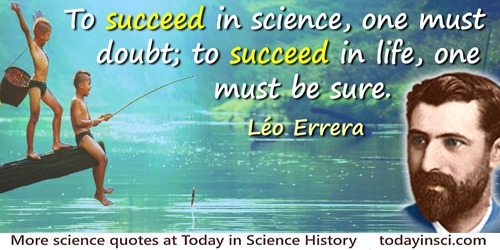 Question: Explain how to determine the time of vibration of a given tuning-fork, and state what apparatus you would require for the purpose.
Answer: For this determination I should require an accurate watch beating seconds, and a sensitive ear. I mount the fork on a suitable stand, and then, as the second hand of my watch passes the figure 60 on the dial, I draw the bow neatly across one of its prongs. I wait. I listen intently. The throbbing air particles are receiving the pulsations; the beating prongs are giving up their original force; and slowly yet surely the sound dies away. Still I can hear it, but faintly and with close attention; and now only by pressing the bones of my head against its prongs. Finally the last trace disappears. I look at the time and leave the room, having determined the time of vibration of the common “pitch” fork. This process deteriorates the fork considerably, hence a different operation must be performed on a fork which is only lent.

Genuine student answer* to an Acoustics, Light and Heat paper (1880), Science and Art Department, South Kensington, London, collected by Prof. Oliver Lodge. Quoted in Henry B. Wheatley, Literary Blunders (1893), 176-7, Question 4. (*From a collection in which Answers are not given verbatim et literatim, and some instances may combine several students' blunders.)

Books wont stay banned. They wont burn. Ideas wont go to jail. In the long run of history, the censor and the inquisitor have always lost. The only sure weapon against bad ideas is better ideas. The source of better ideas is wisdom. The surest path to wisdom is a liberal education.

Everything is like a pursethere may be money in it, and we can generally say by the feel of it whether there is or is not. Sometimes, however, we must turn it inside out before we can be quite sure whether there is anything in it or no. When I have turned a proposition inside out, put it to stand on its head, and shaken it, I have often been surprised to find how much came out of it.

I like the scientific spiritthe holding off, the being sure but not too sure, the willingness to surrender ideas when the evidence is against them: this is ultimately fineit always keeps the way beyond open.

I think I know what is bothering the students. I think that what we are up against is a generation that is by no means sure that it has a future.

In The Modern Temper (1929), 228. The second part of this quote is often seen as a sentence by itself, and a number of authors cite it incorrectly. For those invalid attributions, see quote beginning Logic is only the art on the Joseph Wood Krutch Quotes page of this website.

Scientists often invent words to fill the holes in their understanding.These words are meant as conveniences until real understanding can be found.  Words such as dimension and field and infinity  are not descriptions of reality, yet we accept them as such because everyone is sure someone else knows what the words mean.

Tell a man that there are 300 billion stars in the universe, and hell believe you. Tell him that a bench has wet paint upon it and hell have to touch it to be sure.

Occasionally seen attributed to Albert Einstein, but without citation, so it is most likely anonymous.

The knowledge of Natural-History, being Observation of Matters of Fact, is more certain than most others, and in my slender Opinion, less subject to Mistakes than Reasonings, Hypotheses, and Deductions are; ... These are things we are sure of, so far as our Senses are not fallible; and which, in probability, have been ever since the Creation, and will remain to the End of the World, in the same Condition we now find them.

A Voyage to the Islands Madera, Barbados, Nieves, S. Christophers and Jamaica: With the Natural History of the Herbs and Trees, Four-footed Beasts, Fishes, Birds, Insects, Reptiles, &c. of the Last of those Islands (1707), Vol. 1, 1.

The wreath of cigarette smoke which curls about the head of the growing lad holds his brain in an iron grip which prevents it from growing and his mind from developing just as surely as the iron shoe does the foot of the Chinese girl.

There is a fine line between genius and madnessand you can achieve a lot when people are never quite sure which side of the line youre on today.

From 'Quotable Spaf' on his faculty webpage at purdue.com with note that it is his own original aphorism.

[The unreactivity of the noble gas elements] belongs to the surest of experimental results.