At fertilization, these two 'haploid' nuclei are added together to make a 'diploid' nucleus that now contains 2a, 2b and so on; and, by the splitting of each chromosome and the regulated karyokinetic separation of the daughter chromosomes, this double series is inherited by both of the primary blastomeres. In the resulting resting nuclei the individual chromosomes are apparently destroyed. But we have the strongest of indications that, in the stroma of the resting nucleus, every one of the chromosomes that enters the nucleus survives as a well-defined region; and as the cell prepares for its next division this region again gives rise to the same chromosome (Theory of the Individuality of the Chromosomes). In this way the two sets of chromosomes brought together at fertilization are inherited by all the cells of the new individual. It is only in the germinal cells that the so called reduction division converts the double series into a single one. Out of the diploid state, the haploid is once again generated.

Chromosomes  [contain] some kind of code-script the entire pattern of the individuals future development and of its functioning in the mature state. Every complete set of chromosomes contains the full code.

Every complete set of chromosomes contains the full code; so there are, as a rule, two copies of the latter in the fertilized egg cell, which forms the earliest stage of the future individual. In calling the structure of the chromosome fibres a code-script we mean that the all-penetrating mind, once conceived by Laplace, to which every causal connection lay immediately open, could tell from their structure whether the egg would develop, under suitable conditions, into a black cock or into a speckled hen, into a fly or a maize plant, a rhododendron, a beetle, a mouse or a woman. To which we may add, that the appearances of the egg cells are very often remarkably similar; and even when they are not, as in the case of the comparatively gigantic eggs of birds and reptiles, the difference is not so much in the relevant structures as in the nutritive material which in these cases is added for obvious reasons.
But the term code-script is, of course, too narrow. The chromosome structures are at the same time instrumental in bringing about the development they foreshadow. They are law-code and executive power?or, to use another simile, they are architect's plan and builders craft-in one.

Except for the rare cases of plastid inheritance, the inheritance of all known cooacters can be sufficiently accounted for by the presence of genes in the chromosomes. In a word the cytoplasm may be ignored genetically.

For it is not cell nuclei, not even individual chromosomes, but certain parts of certain chromosomes from certain cells that must be isolated and collected in enormous quantities for analysis; that would be the precondition for placing the chemist in such a position as would allow him to analyse [the hereditary material] more minutely than [can] the morphologists ... For the morphology of the nucleus has reference at the very least to the gearing of the clock, but at best the chemistry of the nucleus refers only to the metal from which the gears are formed.

I may finally call attention to the probability that the association of paternal and maternal chromosomes in pairs and their subsequent separation during the reducing division as indicated above may constitute the physical basis of the Mendelian law of heredity.

'On the Morphology of the Chromosome Group in Brachystola Magna', Biological Bulletin (1902), 4, 39.

It is structure that we look for whenever we try to understand anything. All science is built upon this search; we investigate how the cell is built of reticular material, cytoplasm, chromosomes; how crystals aggregate; how atoms are fastened together; how electrons constitute a chemical bond between atoms. We like to understand, and to explain, observed facts in terms of structure. A chemist who understands why a diamond has certain properties, or why nylon or hemoglobin have other properties, because of the different ways their atoms are arranged, may ask questions that a geologist would not think of formulating, unless he had been similarly trained in this way of thinking about the world.

Now that we locate them [genes] in the chromosomes are we justified in regarding them as material units; as chemical bodies of a higher order than molecules? Frankly, these are questions with which the working geneticist has not much concern himself, except now and then to speculate as to the nature of the postulated elements. There is no consensus of opinion amongst geneticists as to what the genes are—whether they are real or purely fictitious—because at the level at which the genetic experiments lie, it does not make the slightest difference whether the gene is a hypothetical unit, or whether the gene is a material particle. In either case the unit is associated with a specific chromosome, and can be localized there by purely genetic analysis. Hence, if the gene is a material unit, it is a piece of chromosome; if it is a fictitious unit, it must be referred to a definite location in a chromosome—the same place as on the other hypothesis. Therefore, it makes no difference in the actual work in genetics which point of view is taken. Between the characters that are used by the geneticist and the genes that his theory postulates lies the whole field of embryonic development.

Real knowledge goes into natural man in tidbits. A scrap here, a scrap there; always pertinent, linked to safety or nutrition or pleasure. Human curiosity survives and is catered for, by the twopenny weeklies, 24 lines on chromosomes, six lines on a three-headed calf.

The precise equivalence of the chromosomes contributed by the two sexes is a physical correlative of the fact that the two sexes play, on the whole, equal parts in hereditary transmission, and it seems to show that the chromosomal substance, the chromatin, is to be regarded as the physical basis of inheritance. Now, chromatin is known to be closely similar to, if not identical with, a substance known as nuclein (C29H49N9O22, according to Miescher), which analysis shows to be a tolerably definite chemical compased of nucleic acid (a complex organic acid rich in phosphorus) and albumin. And thus we reach the remarkable conclusion that inheritance may, perhaps, be effected by the physical transmission of a particular chemical compound from parent to offspring.

In An Atlas of the Fertilization and Karyokinesis of the Ovum (1895), 4.

Thus a eukaryotic cell may be thought of as an empire directed by a republic of sovereign chromosomes in the nucleus. The chromosomes preside over the outlying cytoplasm in which formerly independent but now subject and degenerate prokaryotes carry out a variety of specialized service functions.

We do not know of any enzymes or other chemical defined organic substances having specifically acting auto-catalytic properties such as to enable them to construct replicas of themselves. Neither was there a general principle known that would result in pattern-copying; if there were, the basis of life would be easier to come by. Moreover, there was no evidence to show that the enzymes were not products of hereditary determiners or genes, rather than these genes themselves, and they might even be products removed by several or many steps from the genes, just as many other known substances in the cell must be. However, the determiners or genes themselves must conduct, or at least guide, their own replication, so as to lead to the formation of genes just like themselves, in such wise that even their own mutations become .incorporated in the replicas. And this would probably take place by some kind of copying of pattern similar to that postulated by Troland for the enzymes, but requiring some distinctive chemical structure to make it possible. By virtue of this ability of theirs to replicate, these genesor, if you prefer, genetic materialcontained in the nuclear chromosomes and in whatever other portion of the cell manifests this property, such as the chloroplastids of plants, must form the basis of all the complexities of living matter that have arisen subsequent to their own appearance on the scene, in the whole course of biological evolution. That is, this genetic material must underlie all evolution based on mutation and selective multiplication.

We have long been seeking a different kind of evolutionary process and have now found one; namely, the change within the pattern of the chromosomes. ... The neo-Darwinian theory of the geneticists is no longer tenable. 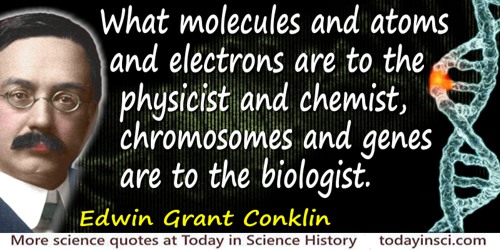 What molecules and atoms and electrons are to the physicist and chemist, chromosomes and genes are to the biologist.

Within the nucleus [of a cell] is a network of fibers, a sap fills the interstices of the network. The network resolves itself into a definite number of threads at each division of the cell. These threads we call chromosomes. Each species of animals and plants possesses a characteristic number of these threads which have definite size and sometimes a specific shape and even characteristic granules at different levels. Beyond this point our strongest microscopes fail to penetrate.

[After science lost] its mystical inspiration  mans destiny was no longer determined from above by a super-human wisdom and will, but from below by the sub-human agencies of glands, genes, atoms, or waves of probability.  A puppet of the Gods is a tragic figure, a puppet suspended on his chromosomes is merely grotesque.