A scientific observation is always a committed observation. It confirms or denies ones preconceptions, ones first ideas, ones plan of observation. It shows by demonstration. It structures the phenomenon. It transcends what is close at hand. It reconstructs the real after having reconstructed its representation.

An experiment in nature, like a text in the Bible, is capable of different interpretations, according to the preconceptions of the interpreter.

And science, we should insist, better than other discipline, can hold up to its students and followers an ideal of patient devotion to the search to objective truth, with vision unclouded by personal or political motive, not tolerating any lapse from precision or neglect of any anomaly, fearing only prejudice and preconception, accepting natures answers humbly and with courage, and giving them to the world with an unflinching fidelity. The world cannot afford to lose such a contribution to the moral framework of its civilisation.

Concluding statements of Pilgrim Trust Lecture (22 Oct 1946) delivered at National Academy of Science Washington, DC. Published in 'The Freedom of Science', Proceedings of the American Philosophical Society (25 Feb 1947), 91, No. 1, 72.

Every discovery, every enlargement of the understanding, begins as an imaginative preconception of what the truth might be. The imaginative preconceptiona hypothesisarises by a process as easy or as difficult to understand as any other creative act of mind; it is a brainwave, an inspired guess, a product of a blaze of insight. It comes anyway from within and cannot be achieved by the exercise of any known calculus of discovery.

Exercising the right of occasional suppression and slight modification, it is truly absurd to see how plastic a limited number of observations become, in the hands of men with preconceived ideas.

Science is a method for testing claims about the natural world, not an immutable compendium of absolute truths. The fundamentalists, by knowing the answers before they start, and then forcing nature into the straitjacket of their discredited preconceptions, lie outside the domain of scienceor of any honest intellectual inquiry.

Science progresses best when observations force us to alter our preconceptions.

Science seems to me to teach in the highest and strongest manner the great truth which is embodied in the Christian conception of entire surrender to the will of God. Sit down before fact as a little child, be prepared to give up every preconceived notion, follow humbly wherever and to whatever abysses nature leads, or you shall learn nothing. I have only begun to learn content and peace of mind since I have resolved at all risks to do this.

Science starts with preconception, with the common culture, and with common sense. It moves on to observation, is marked by the discovery of paradox, and is then concerned with the correction of preconception. It moves then to use these corrections for the designing of further observation and for more refined experiment. And as it moves along this course the nature of the evidence and experience that nourish it becomes more and more unfamiliar; it is not just the language that is strange [to common culture]. 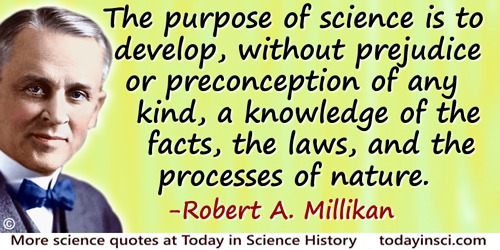 The purpose of science is to develop, without prejudice or preconception of any kind, a knowledge of the facts, the laws, and the processes of nature. The even more important task of religion, on the other hand, is to develop the consciences, the ideals, and the aspirations of mankind.

'A Joint Statement Upon the Relations of Science and Religion' formulated by Millikan (1923), signed by forty-five leaders of religion, science and human affairs. Reproduced in Bulletin of the American Association of University Professors (May 1923), 9, No. 5, 47. Included in Science and Life (1924), 86. (Note the context in time: the contemporary social climate by 1925 led to the Butler Act banning the teaching of evolution in Tennessee schools and the resulting trial of John Scopes.)

The science of systematics has long been affected by profound philosophical preconceptions, which have been all the more influential for being usually covert, even subconscious.

When I hear to-day protests against the Bolshevism of modern science and regrets for the old-established order, I am inclined to think that Rutherford, not Einstein, is the real villain of the piece. When we compare the universe as it is now supposed to be with the universe as we had ordinarily preconceived it, the most arresting change is not the rearrangement of space and time by Einstein but the dissolution of all that we regard as most solid into tiny specks floating in void. That gives an abrupt jar to those who think that things are more or less what they seem. The revelation by modern physics of the void within the atom is more disturbing than the revelation by astronomy of the immense void of interstellar space.