Origin Of The Universe Quotes (20 quotes)


Dilbert: It took weeks but Ive calculated a new theory about the origin of the universe. According to my calculations it didnt start with a Big Bang at allit was more of Phhbwt sound. You may be wondering about the practical applications of the Little Phhbwt theory.
Dogbert: I was wondering when youll go away.

Il est impossible de contempler le spectacle de lunivers étoilé sans se demander comment il sest formé: nous devions peut-être attendre pour chercher une solution que nous ayons patiemment rassemblé les éléments mais si nous étions si raisonnables, si nous étions curieux sans impatience, il est probable que nous navions jamais créé la Science et que nous nous serions toujours contentés de vivre notre petite vie. Notre esprit a donc reclamé impérieusement cette solution bien avant quelle fut mûre, et alors quil ne possédait que de vagues lueurs, lui permettant de la deviner plutôt que de lattendre.
It is impossible to contemplate the spectacle of the starry universe without wondering how it was formed: perhaps we ought to wait, and not look for a solution until have patiently assembled the elements  but if we were so reasonable, if we were curious without impatience, it is probable we would never have created Science and we would always have been content with a trivial existence. Thus the mind has imperiously laid claim to this solution long before it was ripe, even while perceived in only faint glimmersallowing us to guess a solution rather than wait for it.

All material Things seem to have been composed of the hard and solid Particles  variously associated with the first Creation by the Counsel of an intelligent Agent. For it became him who created them to set them in order: and if he did so, it is unphilosophical to seek for any other Origin of the World, or to pretend that it might arise out of a Chaos by the mere Laws of Nature.

For me, the idea of a creation is not conceivable without invoking the necessity of design. One cannot be exposed to the law and order of the universe without concluding that there must be design and purpose behind it all.

Human consciousness is just about the last surviving mystery. A mystery is a phenomenon that people don't know how to think aboutyet. There have been other great mysteries: the mystery of the origin of the universe, the mystery of life and reproduction, the mystery of the design to be found in nature, the mysteries of time, space, and gravity. These were not just areas of scientific ignorance, but of utter bafflement and wonder. We do not yet have the final answers to any of the questions of cosmology and particle physics, molecular genetics and evolutionary theory, but we do know how to think about them. The mysteries haven't vanished, but they have been tamed. They no longer overwhelm our efforts to think about the phenomena, because now we know how to tell the misbegotten questions from the right questions, and even if we turn out to be dead wrong about some of the currently accepted answers, we know how to go about looking for better answers. With consciousness, however, we are still in a terrible muddle. Consciousness stands alone today as a topic that often leaves even the most sophisticated thinkers tongue-tied and confused. And, as with all the earlier mysteries, there are many who insistand hopethat there will never be a demystification of consciousness.

If that's how it all started, then we might as well face the fact that what's left out there is a great deal of shrapnel and a whole bunch of cinders (one of which is, fortunately, still hot enough and close enough to be good for tanning). Trying to find some sense and order in this mess may be as futile as trying to  reconstruct the economy of Iowa from a bowl of popcorn. [On searching for evidence of the Big Bang.] 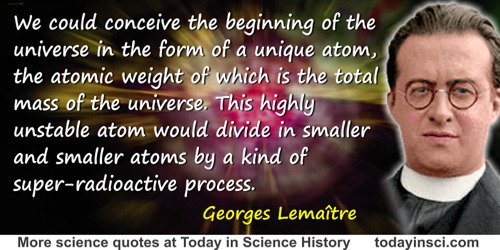 If the world has begun with a single quantum, the notions of space and would altogether fail to have any meaning at the beginning; they would only begin to have a sensible meaning when the original quantum had been divided into a sufficient number of quanta. If this suggestion is correct, the beginning of the world happened a little before the beginning of space and time. I think that such a beginning of the world is far enough from the present order of Nature to be not at all repugnant. It may be difficult to follow up the idea in detail as we are not yet able to count the quantum packets in every case. For example, it may be that an atomic nucleus must be counted as a unique quantum, the atomic number acting as a kind of quantum number. If the future development of quantum theory happens to turn in that direction, we could conceive the beginning of the universe in the form of a unique atom, the atomic weight of which is the total mass of the universe. This highly unstable atom would divide in smaller and smaller atoms by a kind of super-radioactive process.

It is in scientific honesty that I endorse the presentation of alternative theories for the origin of the universe, life and man in the science classroom. It would be an error to overlook the possibility that the universe was planned rather than happening by chance.

My purpose is to tell of bodies which have been transformed  from the earliest beginnings of the world, down to my own times.

No thinking observer was there at the beginning, [of the universe] although most of our personal nucleons, borrowed only for our lifetime from the nuclide pool, must have been there shortly thereafter

The Judeo-Christian tradition describes the beginning of the world in a way that is surprisingly similar to the scientific model. Previously, it seemed scientifically unsound to have light created before the sun. The present scientific view does indeed assume the early universe to be filled with various kinds of radiation long before the sun was created.

In concluding paragraph of 'The Origin of the Universe: An introduction to Recent Theoretical Developments That are Linking Cosmology and Particle Physics', American Scientist (Sep-Oct 1983), 71, No. 5, 480.

The mind of man may be compared to a musical instrument with a certain range of notes, beyond which in both directions we have an infinitude of silence. The phenomena of matter and force lie within our intellectual range, and as far as they reach we will at all hazards push our inquiries. But behind, and above, and around all, the real mystery of this universe [Who made it all?] lies unsolved, and, as far as we are concerned, is incapable of solution.

Describing the point of origin of the universe, from which it all expanded. In a letter, 'The Beginning of the World from the Point of View of Quantum Theory', Nature (9 May 1931), 127, 706.

The question of the origin of the universe is one of the most exciting topics for a scientist to deal with. It reaches far beyond its purely scientific significance, since it is related to human existence, to mythology, and to religion. Furthermore, it deals with questions are connected with the fundamental structure of matter, with elementary particles.

Opening sentences of 'The Origin of the Universe: An introduction to Recent Theoretical Developments That are Linking Cosmology and Particle Physics', American Scientist (Sep-Oct 1983), 71, No. 5, 473. 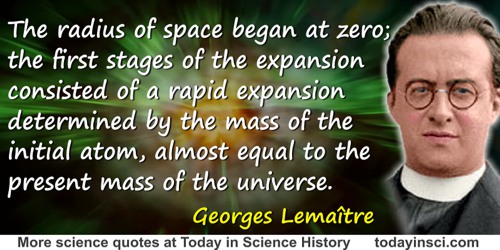 The radius of space began at zero; the first stages of the expansion consisted of a rapid expansion determined by the mass of the initial atom, almost equal to the present mass of the universe. If this mass is sufficient, and the estimates which we can make indicate that this is indeed so, the initial expansion was able to permit the radius to exceed the value of the equilibrium radius. The expansion thus took place in three phases: a first period of rapid expansion in which the atom-universe was broken into atomic stars, a period of slowing-down, followed by a third period of accelerated expansion. It is doubtless in this third period that we find ourselves today, and the acceleration of space which followed the period of slow expansion could well be responsible for the separation of stars into extra-galactic nebulae.

Until recently even the most generous assessment places the subject [of the origin of the universe] at the edges of objective inquiry if not entirely outside the scientific method.

We have already considered with disfavour the possibility of the universe having been planned by a biologist or an engineer; from the intrinsic evidence of his creation, the Great Architect of the Universe now begins to appear as a pure mathematician.

We know next to nothing about virtually everything. It is not necessary to know the origin of the universe; it is necessary to want to know. Civilization depends not on any particular knowledge, but on the disposition to crave knowledge

[The Book of Genesis is] [p]rofoundly interesting and indeed pathetic to me are those attempts of the opening mind of man to appease its hunger for a Cause. But the Book of Genesis has no voice in scientific questions. It is a poem, not a scientific treatise. In the former aspect it is for ever beautiful; in the latter it has been, and it will continue to be, purely obstructive and hurtful.'