Question: Account for the delicate shades of colour sometimes seen on the inside of an oyster shell. State and explain the appearance presented when a beam of light falls upon a sheet of glass on which very fine equi-distant parallel lines have been scratched very close to one another.
Answer: The delicate shades are due to putrefaction; the colours always show best when the oyster has been a bad one. Hence they are considered a defect and are called chromatic aberration.
The scratches on the glass will arrange themselves in rings round the light, as any one may see at night in a tram car.

Genuine student answer* to an Acoustics, Light and Heat paper (1880), Science and Art Department, South Kensington, London, collected by Prof. Oliver Lodge. Quoted in Henry B. Wheatley, Literary Blunders (1893), 182, Question 27. (*From a collection in which Answers are not given verbatim et literatim, and some instances may combine several students' blunders.)

[Recalling Professor Ira Remsen's remarks (1895) to a group of his graduate students about to go out with their degrees into the world beyond the university:]
He talked to us for an hour on what was ahead of us; cautioned us against giving up the desire to push ahead by continued study and work. He warned us against allowing our present accomplishments to be the high spot in our lives. He urged us not to wait for a brilliant idea before beginning independent research, and emphasized the fact the Lavoisier's first contribution to chemistry was the analysis of a sample of gypsum. He told us that the fields in which the great masters had worked were still fruitful; the ground had only been scratched and the gleaner could be sure of ample reward.

Having made a sufficient opening to admit my finger into the abdomen, I passed it between the intestines to the spine, and felt the aorta greatly enlarged, and beating with excessive force. By means of my finger nail, I scratched through the peritoneum on the left side of the aorta, and then gradually passed my finger between the aorta and the spine, and again penetrated the peritoneum, on the right side of the aorta. I had now my finger under the artery, and by its side I conveyed the blunt aneurismal needle, armed with a single ligature behind it...
Describing the first ligation of the aorta in 1817 for left femoral aneurysm. 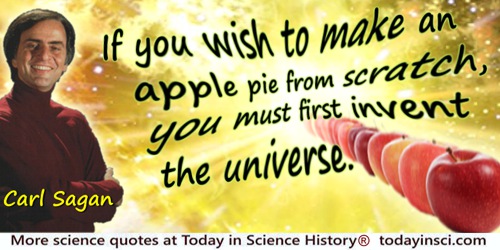 If you wish to make an apple pie from scratch, you must first invent the universe.

In modern thought, (if not in fact)
Nothing is that doesnâ€™t act, So that is reckoned wisdom which
Describes the scratch but not the itch.

Physicians get neither name nor fame by the pricking of wheals or the picking out thistles, or by laying of plaisters to the scratch of a pin; every old woman can do this. But if they would have a name and a fame, if they will have it quickly, they must do some great and desperate cures. Let them fetch one to life that was dead; let them recover one to his wits that was mad; let them make one that was born blind to see; or let them give ripe wits to a fool: these are notable cures, and he that can do thus, if he doth thus first, he shall have the name and fame he deserves; he may lie abed till noon.

Positive, objective knowledge is public property. It can be transmitted directly from one person to another, it can be pooled, and it can be passed on from one generation to the next. Consequently, knowledge accumulates through the ages, each generation adding its contribution. Values are quite different. By values, I mean the standards by which we judge the significance of life. The meaning of good and evil, of joy and sorrow, of beauty, justice, success-all these are purely private convictions, and they constitute our store of wisdom. They are peculiar to the individual, and no methods exist by which universal agreement can be obtained. Therefore, wisdom cannot be readily transmitted from person to person, and there is no great accumulation through the ages. Each man starts from scratch and acquires his own wisdom from his own experience. About all that can be done in the way of communication is to expose others to vicarious experience in the hope of a favorable response.

Scratch an intellectual, and you find a would-be aristocrat who loathes the sight, the sound and the smell of common folk.

The following story (here a little softened from the vernacular) was narrated by Lord Kelvin himself when dining at Trinity Hall:
A certain rough Highland lad at the university had done exceedingly well, and at the close of the session gained prizes both in mathematics and in metaphysics. His old father came up from the farm to see his son receive the prizes, and visited the College. Thomson was deputed to show him round the place. â€śWeel, Mr. Thomson,â€ť asked the old man, â€śand what may these mathematics be, for which my son has getten a prize?â€ť â€śI told him,â€ť replied Thomson, â€śthat mathematics meant reckoning with figures, and calculating.â€ť â€śOo ay,â€ť said the old man, â€śheâ€™ll haâ€™ getten that fraâ€™ me: I were ever a braw hand at the countinâ€™.â€ť After a pause he resumed: â€śAnd what, Mr. Thomson, might these metapheesics be?â€ť â€śI endeavoured,â€ť replied Thomson, â€śto explain how metaphysics was the attempt to express in language the indefinite.â€ť The old Highlander stood still and scratched his head. â€śOo ay: may be heâ€™ll haâ€™ getten that fraâ€™ his mither. She were aye a bletherinâ€™ body."

The scientist has to take 95 per cent of his subject on trust. He has to because he can't possibly do all the experiments, therefore he has to take on trust the experiments all his colleagues and predecessors have done. Whereas a mathematician doesn't have to take anything on trust. Any theorem that's proved, he doesn't believe it, really, until he goes through the proof himself, and therefore he knows his whole subject from scratch. He's absolutely 100 per cent certain of it. And that gives him an extraordinary conviction of certainty, and an arrogance that scientists don't have.

Tis better than riches
To scratch when it itches

[Locating, from scratch, the gene related to a disease is like] trying to find a burned-out light bulb in a house located somewhere between the East and West coasts without knowing the state, much less the town or street the house is on.