Galileo - Illustrated Quote
“And Yet It Moves”

Did he really say it? 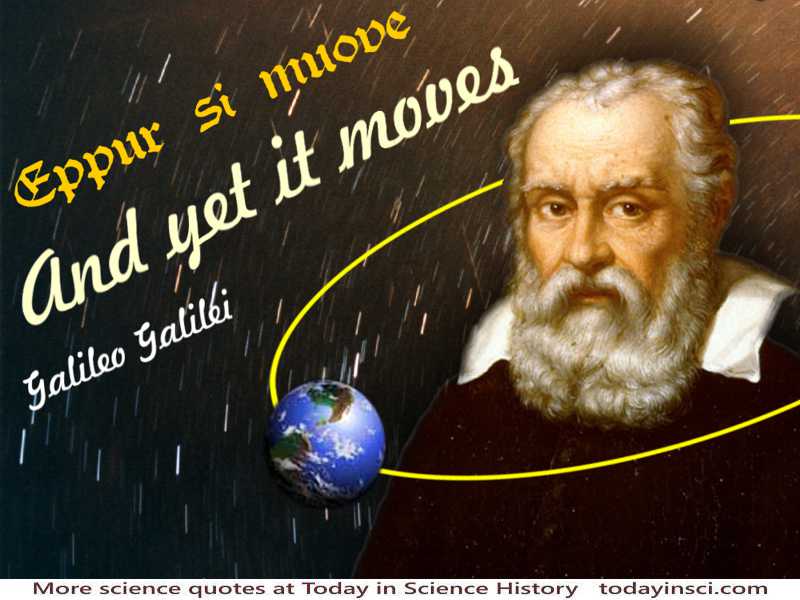 Apocryphal is an adjective warning that what is being described has doubtful authenticity, although widely circulated as if true. Some sayings take on a life of their own, even though documentation is absent.

In this case, the earliest known printed mention of this legendary phrase, also written as “E pur si muove,” was over 250 years ago, in 1761, in Querelles Littéraires.1 By 1757, it reached an English-language book by Giuseppe Baretti, a literary critic living in London, who included a version of the story, in an annotated bibliography of Italian books. Whereas some early biographers wouldn't let lack of documentation get in the way of telling a good tale, others have been attempting to debunk this myth since over a century ago. John Joseph Fahie put it this way in 1903:

“Another error which early biographers were fond of repeating, but of which a moment's reflection would have shown the absurdity, was that Galileo on rising from his knees after reciting the abjuration muttered Eppur si muove (it moves, nevertheless). Some writers, doubtless to make the story more vraisemblable,2 provide a friend to whom the words are whispered. But consider for a moment the situation: an old man of seventy years, suffering in body, and distressed in mind by the accumulated anguish of a ten months' trial, alone and without support in the midst of that stern assembly of Inquisitors. Is it likely that at such a moment he would have muttered or uttered these words? He must have known that the slightest indication by words or gesture of such a state of mind would have consigned him for life to the deepest dungeons of the Inquisition, if to no worse.”3

Of course, though there is no clear record that he actually voiced “Eppur si muove,” he definitely, if not defiantly, continued to hold this opinion. On 31 Oct 2009, the Vatican finally corrected the record with a “not guilty” finding. Thus ended 359 years of formal condemnation of Galileo for holding the truth that the Earth revolves around the Sun, which for so long had been held against him as a scriptural heresy.

1 L’Abbé Irailh, Querelles Littéraires [“Literary quarrels”] (Paris, 1761), Vol. 3, 49. As cited in a footnote on page 325 in Fahie (see below).
2 Vraisemblable is a French word meaning “plausible”, “probable” or “likely.” Vrai is a French adjective for “true,” and semblable is a French adjective for “similar,” which shares the stem in English with “resembling.” In a single ten-dollar word, vraisemblable could be translated into English as “verisimilitudinous.”
3 John Joseph Fahie, Galileo, His Life and Work (1903), 324-325.


Context written by Webmaster, with an extract from Fahie's biography of Galileo. (source)