... semantics ... is a sober and modest discipline which has no pretensions of being a universal patent-medicine for all the ills and diseases of mankind, whether imaginary or real. You will not find in semantics any remedy for decayed teeth or illusions of grandeur or class conflict. Nor is semantics a device for establishing that everyone except the speaker and his friends is speaking nonsense

In 'The Semantic Conception of Truth and the Foundations of Semantics', collected in Leonard Linsky (ed.), Semantics and the Philosophy of Language: A Collection of Readings (1952), 17.

Male secum agit √¶ger, medicum qui h√¶redem ficit.Br>That sick man does ill for himself, who makes his physician his heir.

In 'Ornamenta Rationalia, or, Elegant Sentences' (1625). As given in Essays, Moral, Economical, and Political: A New Edition, With the Latin Quotations Translated (1813), No. 31, 364. A century later, Benjamin Franklin included this in his Poor Richard‚Äôs Almanac as ‚ÄúHe‚Äôs a Fool that makes his Doctor his Heir.‚Äù

I am ill at these numbers.

In Hamlet (1603), Act 2, Scene 2. [Note: Not for arithmetic. The numbers relate to the number of syllables in each line to write poetry; he is a bad poet. ‚ÄîWebmaster]

In On the External Characters of Minerals (1774), xxix, trans. Albert V. and Marguerite CaroaL

It is an ill bird that fouls its own nest.

In use at least as early as 1839, for example in 'Craven' (ed.), The Sporting Review (Aug 1839), 132. Webmaster found subsequent examples being applied metaphorically to criticism of speech, politics or social conduct, rather than any literal interpretation concerning pollution.

Suppose it were perfectly certain that the life and fortune of every one of us would, one day or other, depend upon his winning or losing a game of chess. Don't you think that we should all consider it to be a primary duty to learn at least the names and the moves of the pieces; to have a notion of a gambit, and a keen eye for all the means of giving and getting out of check? Do you not think that we should look with a disapprobation amounting to scorn upon the father who allowed his son, or the state which allowed its members, to grow up without knowing a pawn from a knight?
Yet, it is a very plain and elementary truth that the life, the fortune, and the happiness of every one of us, and, more or less, of those who are connected with us, do depend upon our knowing something of the rules of a game infinitely more difficult and complicated than chess. It is a game which has been played for untold ages, every man and woman of us being one of the two players in a game of his or her own. The chess-board is the world, the pieces are the phenomena of the universe, the rules of the game are what we call the laws of nature. The player on the other side is hidden from us. We know that his play is always fair, just, and patient. But also we know, to our cost, that he never overlooks a mistake, or makes the smallest allowance for ignorance. To the man who plays well the highest stakes are paid with that sort of overflowing generosity with which the strong shows delight in strength. And one who plays ill is checkmated‚Äîwithout haste, but without remorse. 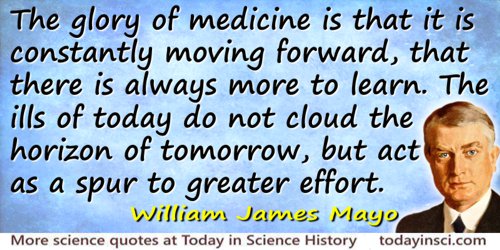 The glory of medicine is that it is constantly moving forward, that there is always more to learn. The ills of today do not cloud the horizon of tomorrow, but act as a spur to greater effort.

Address 'The Aims and Ideals of the American Medical Association', collected in Proceedings of the 66th Annual Meeting of the National Education Association of the United States (1928), 163. As cited in epigraph to Thomas M. Habermann (ed.), Mayo Clinic Internal Medicine Review (2006), Foreward.

The influence (for good or ill) of Plato's work is immeasurable. Western thought, one might say, has been Platonic or anti-Platonic, but hardly ever non-Platonic.

The late James McNeil Whistler had a French poodle of which he was extravagantly fond. This poodle was seized with an affection of the throat, and Whistler had the audacity to send for the great throat specialist, Mackenzie. Sir Morell, when he saw that he had been called to treat a dog, didn't like it much, it was plain. But he said nothing. He prescribed, pocketed a big fee, and drove away.
The next day he sent posthaste for Whistler. And Whistler, thinking he was summoned on some matter connected with his beloved dog, dropped his work and rushed like the wind to Mackenzie's. On his arrival Sir Morell said, gravely: ‚ÄúHow do you do, Mr. Whistler? I wanted to see you about having my front door painted.‚Äù

Attributed or merely a legend. This anecdote wording is from 'Turn About Is Fair Play', Collier's (26 Mar 1904), 32, No. 26, 24, the earliest version the Webmaster has found so far. It has been variously reworded and printed in a number of books and magazines over the decades since, and is still circulated in the present day. The wording of Mackenzie's remark changes from one version to another, but remains true to the sense of it. In Medical Record (4 Jan 1913), 83, No. 1, 46, a reprinted column from The Universal Medical Record says: ‚Äú‚ÄòX‚Äô relates that he ‚Äòhas recently been watching through the weekly papers, of a story anent the artist Whistler and Sir mrell Mackenzie, which, curiously enough, starting in Paris, has now reached the American medical Journals and seems embarked on a long and active career. ... Mr. Ben Trovato, the eminent raconteur, seems for the moment at fault. Still, the natural history of such legends as this leads us to suppose that the story of the laryngologist and the poodle will continue to circulate, till after having served its day it ‚Äòfalls on sleep,‚Äô later to be revived by the journalists of the next generation about some heroes of to-day.‚Äù Examples of other versions are in La Vulgarisation scientifique: revue mensuelle illustr√©e (1906); Don C. Seitz Whistler Stories (1913); Lewis C. Henry, Humorous Anecdotes About Famous People (1948); Graeme Garden The Best Medicine (1984); The Reader's Digest (1986), 128, Nos. 765-769, 40. So, in fact, this anecdote has, indeed, been revived for over a century, but is still narrated about Whistler and Mackenzie. Meanwhile, the column in the Medical Record mentioned above comments: ‚ÄúWhy Whistler‚Äîwhose brother, by-the-bye, was almost equally celebrated in the same department of medicine‚Äîshould have desired the services of a laryngologist for his poodle, heaven only knows.‚Äù So, whether to regard this as entirely legend, or perhaps having some foundation of truth, the Webmaster cannot say, but would like to hear from anyone with more historical background to add.

The surest way to health, say what they will,
Is never to suppose we shall be ill;
Most of the ills which we poor mortals know
From doctors and imagination flow.