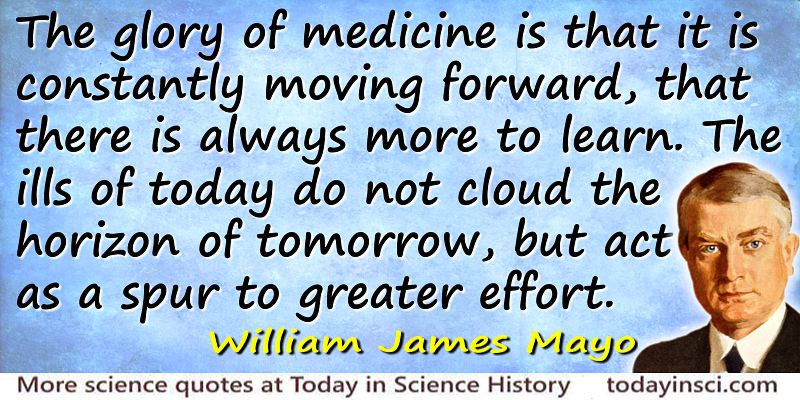 “The glory of medicine is that it is constantly moving forward, that there is always more to learn. The ills of today do not cloud the horizon of tomorrow, but act as a spur to greater effort.”
— William James Mayo
From speech to the Boston Surgical Society (6 Jun 1921).

William J. Mayo gave an address to the National Education Association at their Annual Meeting in Minneapolis during the first week of July 1928, the year he retired from surgery. He spoke to the educators about the “Aims and Ideals of the American Medical Association.” The education of medical students was included in his topics, as well as the practice of medicine for the benefit of the patient. As he came towards the end of his talk, he said:

“The glory of medicine is that it is constantly moving forward, that there is always more to learn. The ills of today do not cloud the horizon of tomorrow, but act as a spur to greater effort. The triumph of the medical profession lies in the victory over physical ailments of man. The failure lies in an inability to appreciate and deal intelligently with the with the emotional instabilities of those physically ill or those with inherited or acquired instabilities of the nervous system which lead to miseries as grievous as though they were dependent on tangible physical causes.”

After a few more remarks, he closed by defining the “Aim of Medicine,” echoing the title of talk:


Text by Webmaster, with quotes from address 'The Aims and Ideals of the American Medical Association', collected in Proceedings of the 66th Annual Meeting of the National Education Association of the United States (1928), 163. (source)