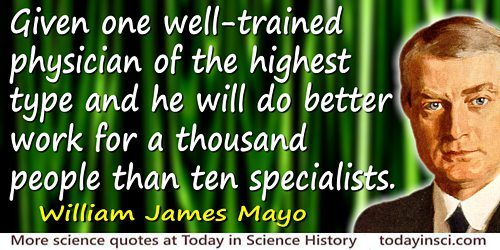 “Given one well-trained physician of the highest type and he will do better work for a thousand people than ten specialists.”
— William James Mayo
From speech to the Boston Surgical Society (6 Jun 1921).

When William Mayo gave a speech to the Boston Surgical Society (6 Jun 1921), his subject was the late surgeon Henry Jacob Bigelow (1818-1890). The quote comes the part of his talk subtitles “Bigelow the Surgeon and Teacher” in the printed version.

“Given one well trained physician of the highest type and he will do better work for a thousand people than ten specialists. One-tenth of each patient would be treated better by the specialist, but the nine-tenths would have little or no treatment. It is for the next generation to produce, as nearly as possible, the superman who shall have obtained from many special workers the threads of all knowledge to be woven together and applied as a whole for the benefit of the patient. Dr. Bigelow belonged to a generation of men who developed a keen power of observation, and who with the history of a case, and their highly trained special senses accomplished wonders.”

Dr. Bigelow detested any kind of cruelty and was outspoken against vivisection. However, Mayo obviously did not share this view, and omitted any reference to Bigelow’s personal aversion to it. In fact, Mayo said quite the opposite:

“Animal experimentation has resulted in gifts of inestimable value to humanity. The pernicious activities of antivivisectionists seriously threaten the continuance of these investigations, which are of such paramount importance to the nation's health. … Experiments on animals were performed in Bigelow’s time, but today such investigation has become one of the foundation stones of progress.”

Mayo did, however, point out some reasons for the opposition to animal experimentation. He spoke against the use of stolen family pet dogs since “the physician should not be a fence for stolen property. The physician has no more right to a stolen dog than to a stolen purse.” Mayo also said that the medical profession should protect the dog from untrained experimenters working without supervision in laboratories, and that some regulations controlling conditions were being adopted.