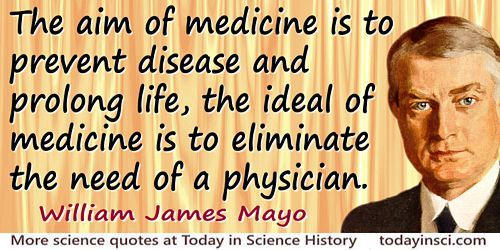 William J. Mayo gave an address to the National Education Association at their Annual Meeting in Minneapolis during the first week of July 1928, the year he retired from surgery. He spoke to the educators about the “Aims and Ideals of the American Medical Association.” The education of medical students was included in his topics, as well as the practice of medicine for the benefit of the patient.

Mayo introduced his talk by saying:

“Early medicine was satisfied largely by an appeal to the emotions, and sickness and health were supposed to be controlled by the gods.”

Toward the end of his address he referred again to the role of religion in modern medicine, reminding not to

“underrate the value of religion as the universal comforter in times of physical or spiritual stress, but to the mass of the people, religion has the same potency that it has had for two thousand years.”

He then closed by defining the “Aim of Medicine,” echoing the title of talk:

Another statement seen quoted elsewhere, which comes from this address is:

“The glory of medicine is that it is constantly moving forward, that there is always more to learn. The ills of today do not cloud the horizon of tomorrow, but act as a spur to greater effort.”


Text by Webmaster with quotes from address, 'The Aims and Ideals of the American Medical Association', collected in Proceedings of the 66th Annual Meeting of the National Education Association of the United States (1928), 158-167. (source)