Question: If you walk on a dry path between two walls a few feet apart, you hear a musical note or “ring” at each footstep. Whence comes this?
Answer: This is similar to phosphorescent paint. Once any sound gets between two parallel reflectors or walls, it bounds from one to the other and never stops for a long time. Hence it is persistent, and when you walk between the walls you hear the sounds made by those who walked there before you. By following a muffin man down the passage within a short time you can hear most distinctly a musical note, or, as it is more properly termed in the question, a “ring” at every (other) step.

Genuine student answer* to an Acoustics, Light and Heat paper (1880), Science and Art Department, South Kensington, London, collected by Prof. Oliver Lodge. Quoted in Henry B. Wheatley, Literary Blunders (1893), 175-6, Question 2. (*From a collection in which Answers are not given verbatim et literatim, and some instances may combine several students' blunders.)

I always tried to live up to Leo Szilard's commandment, ŌĆ£don't lie if you don't have to.ŌĆØ I had to. I filled up pages with words and plans I knew I would not follow. When I go home from my laboratory in the late afternoon, I often do not know what I am going to do the next day. I expect to think that up during the night. How could I tell them what I would do a year hence?

In the beginning (if there was such a thing), God created NewtonŌĆÖs laws of motion together with the necessary masses and forces. This is all; everything beyond this follows from the development of appropriate mathematical methods by means of deduction.

In the preface to his great History of Europe, H. A. L. Fisher wrote: ŌĆ£Men wiser than and more learned than I have discerned in history a plot, a rhythm, a predetermined pattern. These harmonies are concealed from me. I can see only one emergency following upon another as wave follows upon wave ŌĆ”ŌĆØ It seems to me that the same is true of the much older [geological stratigraphical] history of Europe.

In these researches I followed the principles of the experimental method that we have established, i.e., that, in presence of a well-noted, new fact which contradicts a theory, instead of keeping the theory and abandoning the fact, I should keep and study the fact, and I hastened to give up the theory.

It is often claimed that knowledge multiplies so rapidly that nobody can follow it. I believe this is incorrect. At least in science it is not true. The main purpose of science is simplicity and as we understand more things, everything is becoming simpler. This, of course, goes contrary to what everyone accepts. 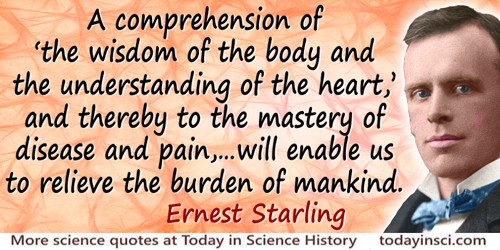 Only by following out the injunction of our great predecessor [William Harvey] to search out and study the secrets of Nature by way of experiment, can we hope to attain to a comprehension of 'the wisdom of the body and the understanding of the heart,' and thereby to the mastery of disease and pain, which will enable us to relieve the burden of mankind.

Ploughing deep, your recipe for killing weeds, is also the recipe for almost every good thing in farming. ŌĆ” We now plough horizontally following the curvatures of the hills and hollows, on the dead level, however crooked the lines may be. Every furrow thus acts as a reservoir to receive and retain the waters, all of which go to the benefit of the growing plant, instead of running off into streams ŌĆ” In point of beauty nothing can exceed that of the waving lines and rows winding along the face of the hills and vallies.

The history of acceptance of new theories frequently shows the following steps: At first the new idea is treated as pure nonsense, not worth looking at. Then comes a time when a multitude of contradictory objections are raised, such as: the new theory is too fancy, or merely a new terminology; it is not fruitful, or simply wrong. Finally a state is reached when everyone seems to claim that he had always followed this theory. This usually marks the last state before general acceptance.

The most important distinction between the two qualities [talent and genius] is this: one, in conception, follows mechanical processes; the other, vital. Talent feebly conceives objects with the senses and understanding; genius, fusing all its powers together in the alembic of an impassioned imagination, clutches every thing in the concrete, conceives objects as living realities, gives body to spiritual abstractions, and spirit to bodily appearances, and like
ŌĆ£A gate of steel
Fronting the sun, receives and renders back
His figure and his heat!ŌĆØ

The sciences have sworn among themselves an inviolable partnership; it is almost impossible to separate them, for they would rather suffer than be torn apart; and if anyone persists in doing so, he gets for his trouble only imperfect and confused fragments. Yet they do not arrive all together, but they hold each other by the hand so that they follow one another in a natural order which it is dangerous to change, because they refuse to enter in any other way where they are called. ...

The year 1896 ŌĆ” marked the beginning of what has been aptly termed the heroic age of Physical Science. Never before in the history of physics has there been witnessed such a period of intense activity when discoveries of fundamental importance have followed one another with such bewildering rapidity.

In 'The Electrical Structure of Matter', Reports of the British Association for the Advancement of Science (1924), C2.

[Euclid's Elements] has been for nearly twenty-two centuries the encouragement and guide of that scientific thought which is one thing with the progress of man from a worse to a better state. The encouragement; for it contained a body of knowledge that was really known and could be relied on, and that moreover was growing in extent and application. For even at the time this book was writtenŌĆöshortly after the foundation of the Alexandrian MuseumŌĆöMathematics was no longer the merely ideal science of the Platonic school, but had started on her career of conquest over the whole world of Phenomena. The guide; for the aim of every scientific student of every subject was to bring his knowledge of that subject into a form as perfect as that which geometry had attained. Far up on the great mountain of Truth, which all the sciences hope to scale, the foremost of that sacred sisterhood was seen, beckoning for the rest to follow her. And hence she was called, in the dialect of the Pythagoreans, ŌĆśthe purifier of the reasonable soul.ŌĆÖ

From a lecture delivered at the Royal Institution (Mar 1873), collected postumously in W.K. Clifford, edited by Leslie Stephen and Frederick Pollock, Lectures and Essays, (1879), Vol. 1, 296.