After a tremendous task has been begun in our time, first by Copernicus and then by many very learned mathematicians, and when the assertion that the earth moves can no longer be considered something new, would it not be much better to pull the wagon to its goal by our joint efforts, now that we have got it underway, and gradually, with powerful voices, to shout down the common herd, which really does not weigh arguments very carefully?

At the present time the fishing industry is, in some ways, at the stage at which primitive man was many centuries agowe hunt the fish that Nature provides, just as our ancestors hunted animals for food. We have not yet begun to herd fish or to improve their qualitybut one day we shall be forced to farm the seas as we do the land.

Every lecture should state one main point and repeat it over and over, like a theme with variations. An audience is like a herd of cows, moving slowly in the direction they are being driven towards. If we make one point, we have a good chance that the audience will take the right direction; if we make several points, then the cows will scatter all over the field. The audience will lose interest and everyone will go back to the thoughts they interrupted in order to come to our lecture.

How far the main herd of metaphysicans are still lagging behind Plato; and how, for near two thousand years, they were almost all content to feed on the crumbs dropt from Aristotles table.

Co-author with his brother Augustus William Hare Guesses At Truth, By Two Brothers: Second Edition: With Large Additions (1848), Second Series, 13. (The volume is introduced as more than three fourths new. This quote is identified as by Julius; Augustus had died in 1833.)

I was young then, and full of trigger-itch; I thought that because fewer wolves meant more deer, that no wolves would mean hunters paradise. I now suspect that just as a deer herd lives in mortal fear of its wolves, so does a mountain live in mortal fear of its deer. And perhaps with better cause, for while a buck pulled down by wolves can be replaced in two or three years, a range pulled down by too many deer may fail of replacement in as many decades.

Man is an imitative creature, and whoever is the foremost leads the herd.

As quoted, without citation, in John Walker, A Fork in the Road: Answers to Daily Dilemmas from the Teachings of Jesus Christ (2005), 137.

Men, it has been well said, think in herds; it will be seen that they go mad in herds, while they only recover their senses slowly, one by one.

Nature being capricious and taking pleasure in creating and producing a continuous sucession of lives and forms because she knows that they serve to increase her terrestrial substance, is more ready and swift in her creating than time is in destroying, and therefore she has ordained that many animals shall serve as food one for the other; and as this does not satisfy her desire she sends forth frequently certain noisome and pestilential vapours and continual plagues upon the vast accumulations and herds of animals and especially upon human beings who increase very rapidly because other animals do not feed upon them.

Now the American eagle is verging on extinction. Even the polar bear on its ice floes has become easy game for flying sportsmen. A peninsula named Udjung Kulon holds the last two or three dozen Javan rhinoceroses. The last known herd of Arabian oryx has been machine-gunned by a sheik. Blue whales have nearly been harpooned out of their oceans. Pollution ruins bays and rivers. Refuse litters beaches. Dam projects threaten Colorado canyons, Hudson valleys, every place of natural beauty that can be a reservoir for power. Obviously the scientific progress so alluring to me is destroying qualities of greater worth.

One can often recognize herd animals by their tendency to carry bibles.

From 'The Signal', a short story in Illusionless Man: Fantasies and Meditations (1971).

The cowman who cleans his range of wolves does not realize that he is taking over the wolfs job of trimming the herd to fit the range. He has not learned to think like a mountain. Hence we have dustbowls, and rivers washing the future into the sea.

The Internet is like a herd of performing elephants with diarrheamassive, difficult to redirect, awe-inspiring, entertaining and a source of mind-boggling amounts of excrement when you least expect it.

Posted to a mailing list (1992), and circulated from there by some newsgroups. As authenticated in 'Quotable Spaf' on his faculty webpage at purdue.com

The really valuable thing in the pageant of human life seems to me not the State but the creative, sentient individual, the personality; it alone creates the noble and the sublime, while the herd as such remains dull in thought and dull in feeling.

The ultimate repository of herd influence is languagea device which not only condenses the opinions of those with whom we share a common vocabulary, but sums up the perceptual approach of swarms who have passed on.

In 'Reality is a Shared Hallucination', Global Brain: The Evolution of Mass Mind from the Big Bang to the 21st Century (2000), 77.

This topic brings me to that worst outcrop of the herd nature, the military system, which I abhor. That a man can take pleasure in marching in formation to the strains of a band is enough to make me despise him. He has only been given his big brain by mistake; a backbone was all he needed. This plague-spot of civilisation ought to be abolished with all possible speed. Heroism by order, senseless violence, and all the pestilent nonsense that goes by the name of patriotismhow I hate them! War seems to me a mean, contemptible thing: I would rather be hacked in pieces than take part in such an abominable business.

We have no organ at all for knowledge, for truth: we know (or believe or imagine) precisely as much as may be useful in the interest of the human herd, the species: and even what is here called usefulness is in the end only a belief, something imagined and perhaps precisely that most fatal piece of stupidity by which we shall one day perish. 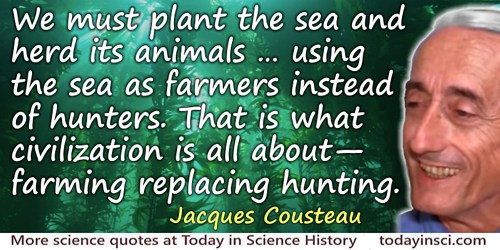 We must plant the sea and herd its animals  using the sea as farmers instead of hunters. That is what civilization is all aboutfarming replacing hunting.

Epigraph for Robin Neill, 'Aquaculture Property Rights in Canada', in Nicholas Schneider (ed.), A Breath of Fresh Air: The State of Environmental Policy in Canada (2008), 180.