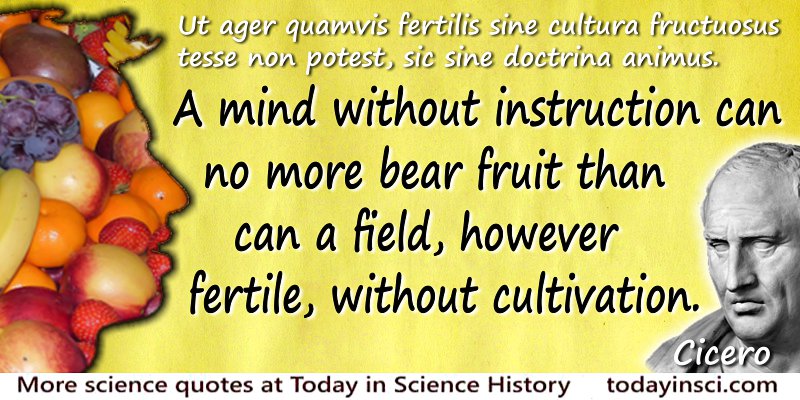 “A mind without instruction can no more bear fruit than can a field, however fertile, without cultivation. ”
— Marcus Tullius Cicero
Tusculan Disputations

The subject quote (above) comes in a passage from Tusculan Disputations, in which Marcus Cicero defends philosophers, when questioned about poor examples among them. In the form above, the quote is found in a number of books of quotations.

To see the quote more in context, here is a longer extract, showing the way J.E. King translated the passage (1927):

“…not all cultivated fields are productive, and the dictum of Accius is false:

Though placed in poorer soil good seed can yet
Of its own nature bear a shining crop,

and in the same way not all educated minds bear fruit. Moreover, to continue the same comparison, just as a field, however good the ground, cannot be productive without cultivation, so the soul cannot be productive without teaching. So true it is that the one without the other is ineffective. Now the cultivation of the soul is philosophy; this pulls out vices by the roots and makes souls fit for the reception of seed, and commits to the soul and, as we may say, sows in it seed of a kind to bear the richest fruit.”1

This can be compared with the translation by Andrew P. Peabody (1886):

“…for as all cultivated fields are not harvest-yielding, and as there is no truth in what Attius says,—

‘Though seed be sown on unpropitious soil,
It springs and ripens by its innate virtue,’

so all cultivated minds do not bear fruit. To continue the figure: as a field, though fertile, cannot yield a harvest without cultivation, no more can the mind without learning; thus each is feeble without the other. But philosophy is the culture of the soul. It draws out vices by the root, prepares the mind to receive seed, and commits to it, and, so to speak, sows in it what, when grown, may bear the most abundant fruit.”2

Yet another translator, Charles Duke Yonge, puts it this way:

“…for as all the fields which are cultivated are not fruitful, (and this sentiment of Accius is false, and asserted without any foundation,

The ground you sow on, is of small avail;
To yield a crop good seed can never fail:)

it is not every mind which has been properly cultivated that produces fruit; — and to go on with the comparison, as a field, although it may be naturally fruitful cannot produce a crop, without dressing, so neither can the mind, without education; such is the weakness of either without the other. Whereas philosophy is the culture of the mind: this it is which plucks up vices by the roots; prepares the mind for the receiving of seeds, commits them to it, or, as I may say, sows them, in the hope that, when come to maturity, they may produce a plentiful harvest.”3

For those readers wishing to read Cicero’s words in the original Latin: